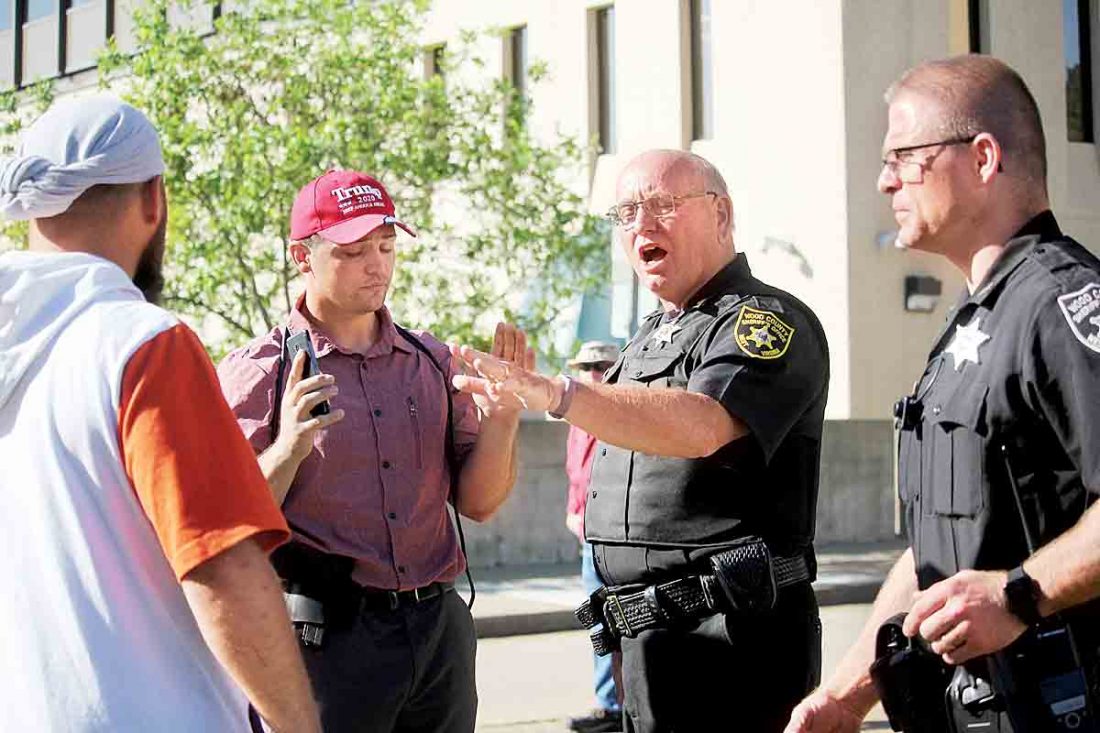 “The marchers were very peaceful,” Stephens said. “They expressed their opinions in a way that did not provoke anybody.

“We had several marchers that thanked us for being there to protect them,” he said.

As the procession made its way down Market Street from 19th to Second Street, with police cars in front and behind, Martin said law enforcement encountered about a dozen individuals who were visibly carrying firearms. Martin said what they did “was not illegal, but at the same time, we didn’t want it to escalate into violence.”

Stephens said he received a complaint that one man, who had a handgun, was being confrontational. The sheriff said he “explained to him that wasn’t the time or place to be provoking anybody.”

The man left shortly after the conversation on his own volition, Stephens said.

Martin said the armed individuals were not part of a single group.

“It was not a coordinated effort, that we know of,” he said. “They just didn’t want it to turn into looting and riots.”

That has been the outcome of some protests in other parts of the country as people demonstrate against the death of Floyd after a Minneapolis police officer knelt on his neck for several minutes while Floyd shouted that he couldn’t breathe.

“The hardest part of that thing was to discern legitimate protesters from rioters or people who wanted to cause problems for us and the community,” he said.

No citations were issued and no property was damaged, the chief said.

“We had zero problems,” he said.

He’s hoping the same proves true on Wednesday, when another peaceful protest is planned for noon at the Municipal Building.

“We are planning for it now,” Martin said.

Roommates Troy Phillip Mathews, 21, of Parkersburg, and Shawn Malepa, 27, of Parkersburg, participated in Sunday’s march on Market Street after hearing about it from fellow and past classmates from Ohio Valley University.

“When we were were there (at OVU) a former roommate and I started the black student union chapter that hadn’t existed before us and we had a few interesting hurdles to start that three or four years ago,” said Malepa. “Even after we graduated there’s a lot of people who know us from that time that know how active we are in the community. Now, it’s not so much the face of that organization but I had a friend who told me there’s something that’s coming up that they knew I’d want to be a part of.”

Mathews said he worried for his safety after watching violent acts break out during other protests between supporters and those against the protests and even with local law enforcement.

“Frankly it’s scary, it’s something that I struggled to even get here,” said Mathews. “My mother called me as well, she’s in New York, and she said ‘I see it here, I see the news out there. Do not go.”