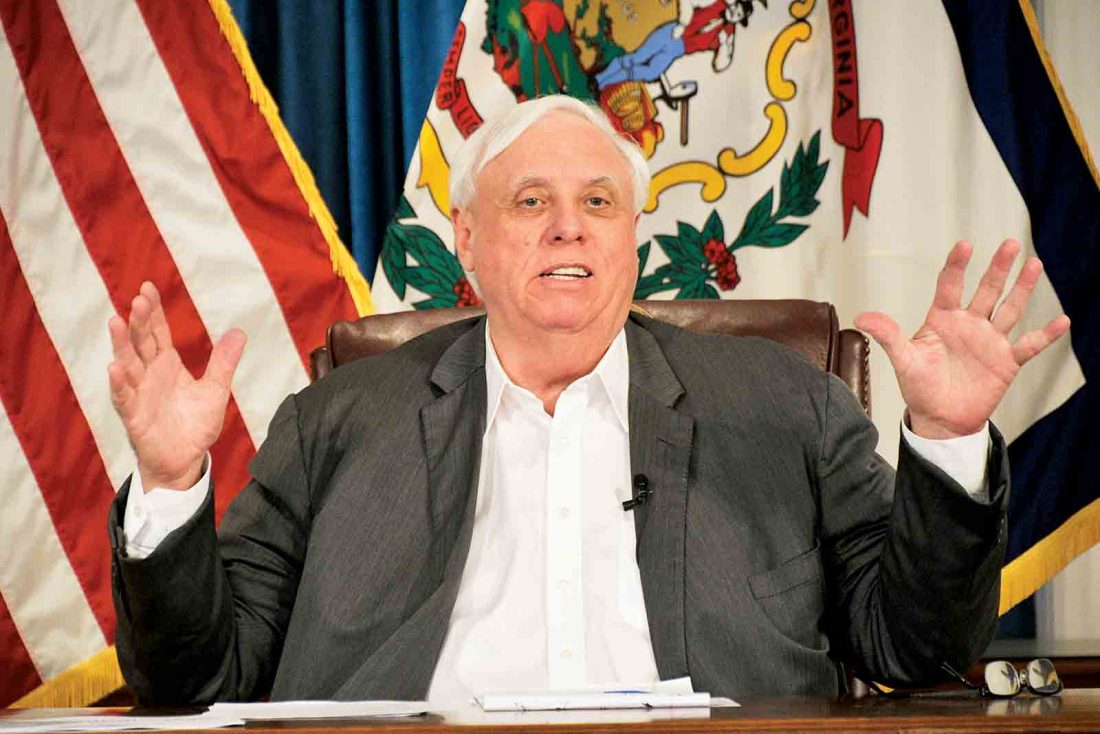 CHARLESTON — Gov. Jim Justice made his feelings known Tuesday about those pushing for spending part of the state’s $1.25 billion coronavirus relief package and those pushing him to keep unemployment benefits flowing to those being called back to work.

“Let’s please stop the politics, please,” Justice said. “That’s all there is to it. That’s all this is.”

The letter asked Justice, Commerce Department Secretary Ed Gaunch and Workforce West Virginia Acting Director Scott Adkins to confirm that workers with chronic health issues or workers who live with someone who is at greater risk for being infected with COVID-19 can still claim unemployment for leaving a job or turning down work for a business that is approved by the state to reopen.

Unemployment insurance is funded by state and federal taxes on employers, but the states have a wide degree of latitude on how unemployment systems work. Federal rules require claimants to be able to work. Workers who are called back into work due to a COVID-19 shutdown order have to return to work.

“For crying out loud, I’m not the king,” Justice said. “There are federal guidelines that we all have to follow. Absolutely. This is nothing but politics in a situation where we have a pandemic where people are dying and we have economic stress beyond belief.”

“Gov. Justice has repeatedly upheld that the health and safety of our workforce must be a top priority,” the letter continued. “Failing to take steps to protect these individuals will only further hurt our disability and elderly communities.”

Justice took aim Tuesday at some of the groups listed in the letter, such as the ACLU and Mountain State Justice, that tried to take the state to court to force the release of several inmates in state correctional facilities to ease overcrowding issues and to mitigate any possible spread of COVID-19. Both the state and federal courts sided in favor of the state correctional system’s COVID-19 response plan. The state did release several non-violent offenders and first-time parole violators.

Justice also took aim at lawmakers wanting the state to begin distributing the $1.25 billion in direct coronavirus aid to the state as part of the $2 trillion C.A.R.E.S. Act. Justice said he awaits specific guidance for its use. The U.S. Treasury Department released a guidance April 22 stating the funding can be used for expenditures incurred by the public health emergency caused by the coronavirus that were not already accounted for in the current fiscal year budget.

In an op-ed released Tuesday, state Sens. John Unger, D-Berkeley, and Ron Stollings, D-Boone, called on Justice using part of the $1.25 billion for expanded coronavirus testing, contact tracing and personal protective equipment, such as masks and gowns. Stollings also is a Democratic candidate for governor.

“For the past two months, state residents have done their part in ‘flattening the curve’ by staying at home and social distancing,” said Stollings and Unger, co-chairs of the Public Health Caucus. “This was supposed to give the state time to perfect its testing plan and provide health care providers with PPEs. West Virginia still doesn’t have enough of both.”

U.S. Sen. Joe Manchin, D-W.Va., released a statement Tuesday evening taking issue with Justice’s statements on the use of the $1.25 billion in coronavirus relief funds. Manchin said Justice needs to stop sitting on the money hoping to use it for the state budget and start distributing it to local governments.

“I disagree with the Governor, this is not political it is a matter of survival for all West Virginians,” Manchin said. “Governor Justice already has permission from President Trump’s Department of Treasury on how the state can use this money…There is no excuse for the state to sit on this money any longer.”

The U.S. Treasury document makes clear the funding cannot be used for to fill state and local government budget shortfalls caused by decreased tax revenue as businesses have shut down to slow the spread of the virus, though justice has expressed hope that the guidance will be changed to allow for use to plug an estimated $500 million hole in the state General Revenue Fund the state officials expect by the end of the fiscal year on June 30.

Justice said he encourages cities and counties to submit detailed records of what local needs regarding their coronavirus economic impacts are so the state can start releasing some of the $1.25 billion.

“We’re going to do the smart thing. We’re going to do absolutely the most transparent things,” Justice said. “We are trying with all of us, but we have got to stop the politics. This is too serious of a situation. It is an absolute pandemic that no one has ever dealt with. And there are a lot of people here doing really really good work.”