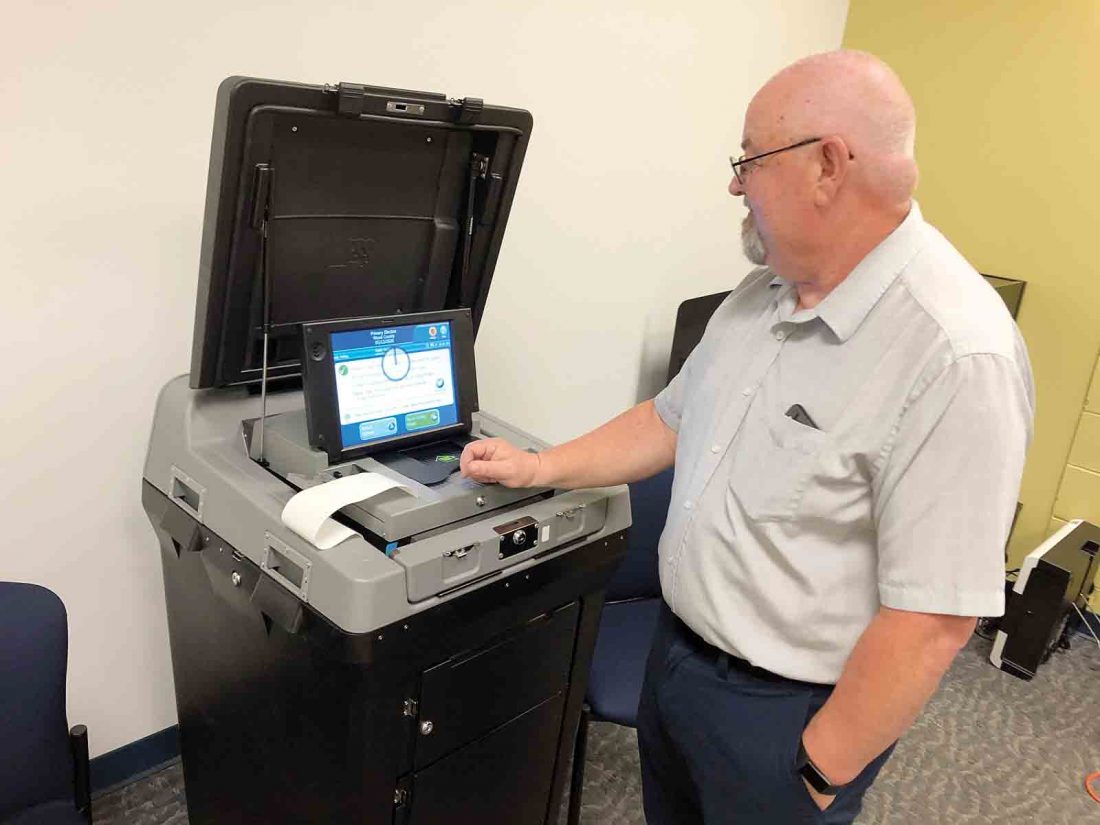 Wood County Clerk Mark Rhodes does a systems check of the scanning machine that will be used to count votes as early voting gets underway this morning at the Judge Black Annex. (Photo by Brett Dunlap)

PARKERSBURG — People will be able to cast their ballots today as early voting gets underway at the Judge Black Annex in downtown Parkersburg.

Wood County Clerk Mark Rhodes and his staff have been preparing for people to begin voting in the 2020 primary, which had to be delayed because of the ongoing COVID-19 pandemic. Primary election day is June 9.

”early voting should be set up pretty much the same as normal,” Rhodes said.

More equipment will be on hand in case there’s a heavy turnout, he said.

”That way we can keep people flowing through,” Rhodes said. 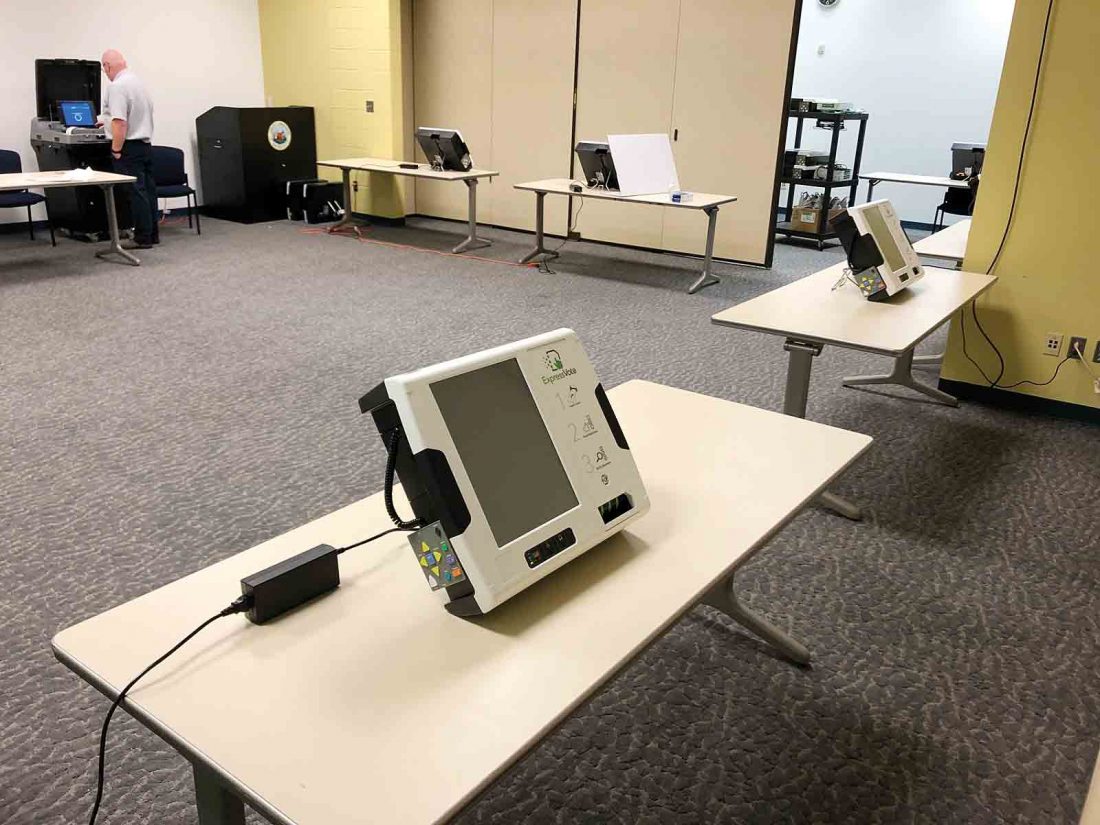 The early voting site at the Judge Black Annex in downtown Parkersburg will open today at 8:30 a.m. Twenty voting machines and two scanning machines will be set up. The machines are spaced to maintain social distancing recommendations during the pandemic. (Photo by Brett Dunlap)

Twenty voting machines and two scanning machines will be available to handle a high volume during early voting. The machines are spaced to maintain social distancing recommendations.

If it gets busy, the waiting area and registration tables also have been spaced to handle social distancing. Planned is an entrance into the voting area and a separate exit so people don’t have to pass each other in proximity to one another.

An ample supply of pens will be on hand so people don’t have to share them.

”After someone signs their name, they can keep the pen,” Rhodes said.

A supply of cotton swabs will be on hand for people to use as a stylist on the voting machines to be able to place their votes without touching the screen.

”We will still disinfect everything,” Rhodes said of regular cleanings of the voting machines between each voter.

Election officials will have copies of each ballot being used and will be loaded into a voting machine when the voter is ready to vote. Each machine will print a completed ballot which will be fed into a scanner to be counted.

Over the past couple of weeks poll workers, many who have worked many prior elections, have been informing county officials they will not be able to work this year due to health concerns from the ongoing COVID-19 pandemic.

Rhodes said he had one poll worker who pulled out Tuesday, but they still have enough alternates that there will be enough people to handle the polls during early voting. There will be 12 poll workers for the Judge Black Annex location.

”Right now, we are looking good,” he said.

Officials mailed applications to all registered voters to see if they want to vote by absentee ballots, due to health concerns. Over 9,000 were sent out. The county received around 6,000 back with absentee ballots sent out.

”If someone applied for an absentee ballot, (the County Clerk’s records are) going to show they already applied,” Rhodes said.

If they bring that ballot back to the early voting location with them, they can give that to the poll workers, voided out and the person would vote on one of the voting machines. The discarded ballot would be kept so officials could keep track of it and make sure no one tried to vote on it.

”If they applied for an absentee ballot and they don’t bring it back then they will have to vote a provisional ballot,” Rhodes said.

They cannot accept a voted absentee ballot at the early voting site or on Election Day, he said.

A number of calls he has received on Wednesday have dealt with when the satellite sites will be open.

The county’s satellite sites will start early voting on June 2 at the Vienna Community Building, Williamstown High School, Mineral Wells School and Lubeck Elementary. The site at the Judge Black Annex will also be open at that time. All the sites would be open the same hours during early voting.

Rhodes is not sure how big of a crowd may be expected when early voting gets underway today at the Judge Black Annex.

”We still want to make sure everyone has the chance to vote,” he said.