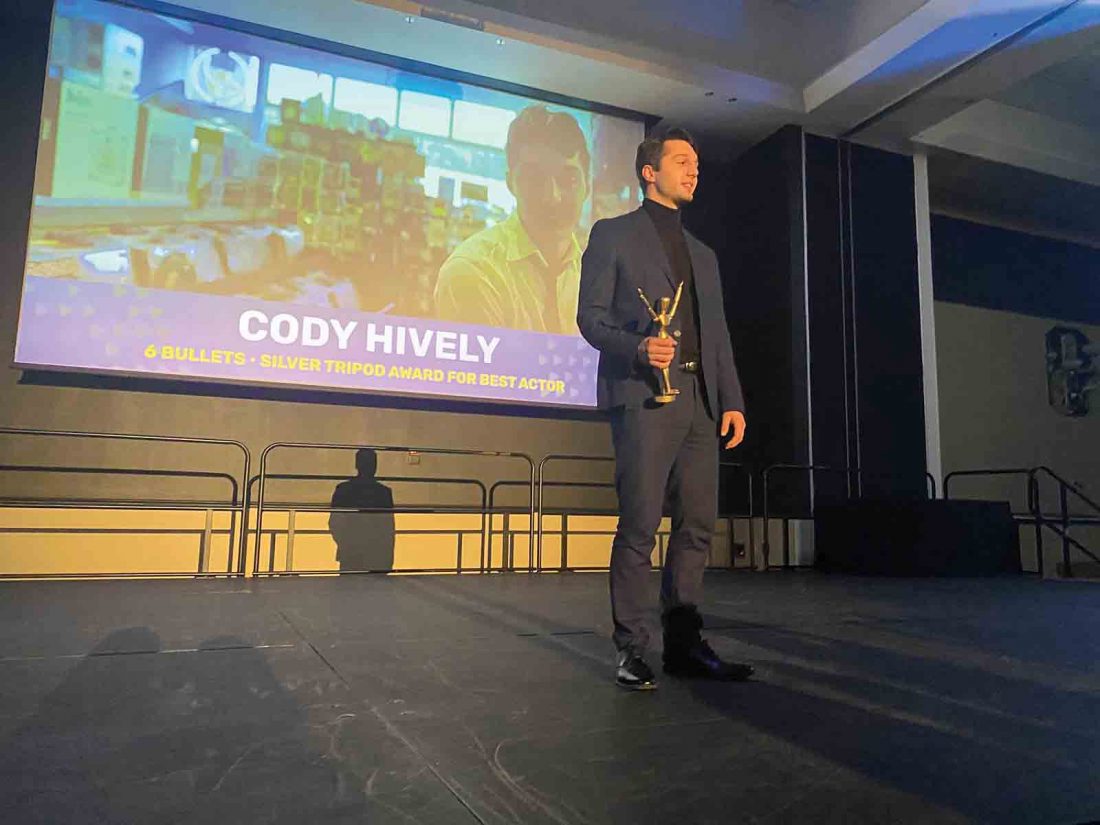 Cody Hively, a Parkersburg native, receives a Silver Tripod Award for Best Actor at the Campus Movie Fest at the University of Central Florida at Orlando. Hively played the lead in “6 Bullets,” a short film. (Photo Provided)

PARKERSBURG — A Parkersburg native has won an acting award for his role in a 15-minute short, “6 Bullets.”

Cody Hively received the Campus Movie Fest’s Silver Tripod Award for Best Actor in February at the University of Central Florida at Orlando. The movie was produced by Unpeeled Productions.

Hively, eager to play the role of Elliot, was familiar with the production company and knows several people in the company, Producer Joey Soto, Director Abiesel Baez , Cinematographer Carter Bridges and Assistant Director Kahill Collazo. Hively said he was on board from the get-go.

“They reached out to me and offered me the role, knowing my prior experience,” he said.

“6 Bullets” is about Elliott, who in boredom acquires a gun, which through playing Russian roulette gives him a new lease on life. The movie can be watched at 6bulletsfilm.com.

Hively will advance to a national competition in Hollywood.

Hively is a graduate of Parkersburg South High School and attended West Virginia Wesleyan before transferring to West Virginia University where he received a bachelor’s in fine arts in 2018.

He played football at South and ran track at Wesleyan, but four knee surgeries ended any athletic endeavors and he turned to acting.

“I put my passion into something else,” Hively said.

Sports and acting have one thing in common, competitiveness, he said. Actors competing for parts is not different from athletes competing to win in sports, Hively said.

He was living in New York City until three weeks ago when he returned home to Wood County because of the pandemic.

Hively, who has remained in isolation, said daily life in New York is a contrast from before the pandemic. Once-filled streets are now empty of people, he said.

He plans to pursue his acting career in Los Angeles after his lease is up in New York — preferring film and television acting — and not dwell on one particular genre.

In previous roles, he has performed in “The Acrobat” in Malta, which received an award, that was produced by UNIFAUN Productions of Malta. He did a commercial for McDonald’s, played a detective in a segment of “Investigation Discovery” and directed a short film in North Carolina, “Lonely Waters.”

Hively is the son of Amy Johnson and Ed Hively, the grandson of Jim and Linda White and the great-grandson of Carlton Stephens.