W.Va. House erupts into drama due to alleged argument between lawmakers 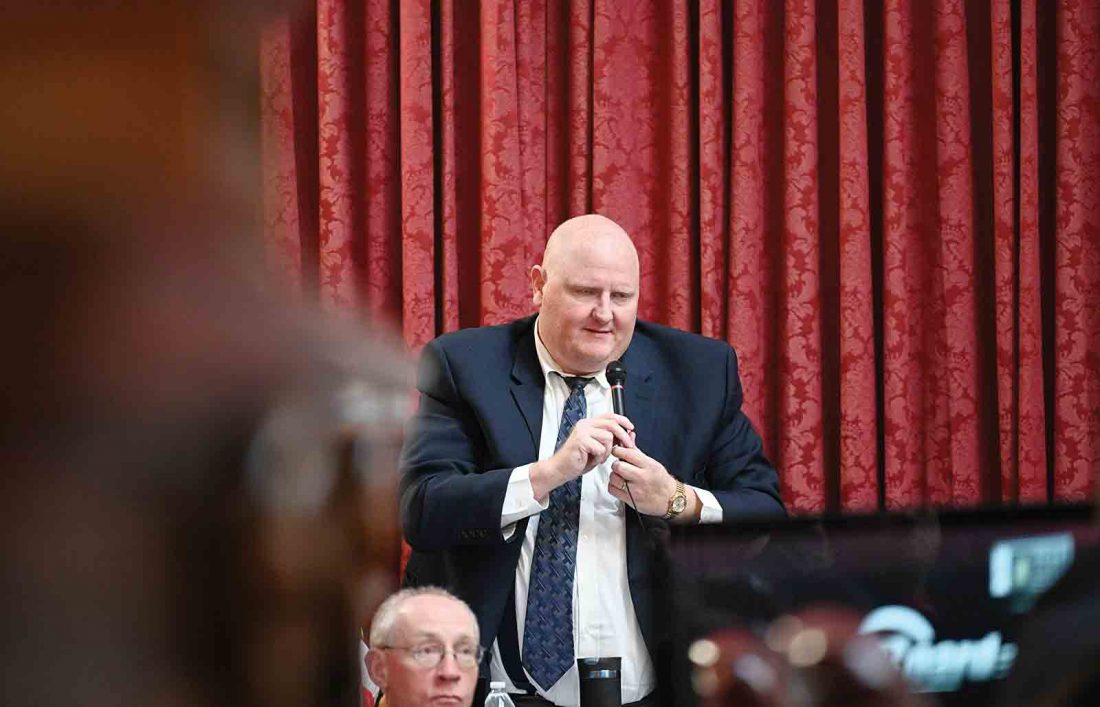 Delegate Eric Porterfield, R-Mercer, stands to make a motion to require all bills on third reading be read in their entirety. (Photo courtesy of WV Legislative Photography)

CHARLESTON — Tempers flared Wednesday on the 36th day of the 2020 legislative session as one delegate required multiple bills to be read in full to protest lack of action on an alleged incident with another lawmaker.

Delegate Eric Porterfield, R-Mercer, made motion after motion Wednesday to have bills up for third reading and passage in the House of Delegates. Typically, bills are explained by the committee chairs instead of having the bill read in full, but if any delegate objects to having the bill explained, the full bill must be read.

Porterfield made the motions for bills to be read in full as a protest of House leadership for not punishing Delegate Brandon Steele, R-Raleigh, over an alleged incident between the two delegates after a committee meeting Monday. He announced his procedural threat Tuesday.

“I will be in protest of this. I intend to have a lot of long days here in this House,” Porterfield said. “I might suffer some consequences in my own party.”

The House Banking and Insurance Committee voted Monday on House Bill 4043 that would prevent state, county and municipal agencies from covering any portions of Public Employee Insurance Act premiums for spouses. The bill, whose lead sponsor was Steele, died in committee on an 11-11 vote with three members absent.

According to remarks by Porterfield during the House floor session Tuesday, the lead sponsor of HB 4043 (Steele) allegedly confronted Porterfield and a delegate identified as Eric Householder, R-Berkeley, after 6 p.m. Monday, hours after the committee vote.

“Delegate Steele told me to walk away like a coward just like I had from the committee meeting,” Porterfield wrote in a statement released after Wednesday’s floor session. “I approached to speak with him about the matter and he became very aggressive toward me; approaching me and face to face with me and causing me to have concern that he might become violent. We briefly argued. I observed the odor of alcohol on his breath and he was apparently intoxicated to some degree.”

Porterfield, who became blind after a bar fight in Indiana in 2006, said he had been contact with House Speaker Roger Hanshaw, R-Clay, and the Capitol Police after the alleged incident.

Porterfield called for action to be taken against Steele, accusing fellow House Republicans of hypocrisy of trying to censure Porterfield last year over anti-LGBTQ remarks made during a committee meeting.

“If I had treated someone with a disability — a member of this House with a disability — the way I was treated (Monday), I would want someone to take action against me,” Porterfield said. “I think there needs to be further action taken on this…but I would like to see the same members in my own caucus that were so active to try to censure me last year over comments made to have enough integrity to look at that option here.”

Porterfield also moved to have all bills on second reading read in their entirety but rescinded the motion. He also moved to have former Berkeley County Republican delegate and Republican candidate for governor Mike Folk ejected from the House floor for allegedly using foul language. Former members are often given privileges of the floor when visiting the Legislature. Porterfield’s motion was rejected.

Porterfield said he would continue to have bills read in full until House leadership punishes Steele or Steele steps down from his committees.

“Today, I have requested that all but one of the bills on third reading be read in their entirety,” Porterfield continued. “I reserve the right to continue to exercise this right until the issues involving Delegate Steele’s conduct are properly addressed.”

Steele has remained publicly silent about the accusations, though sources say that he has denied the incident — as described by Porterfield — to House leadership. Householder was chairing a committee meeting and was unavailable for comment.