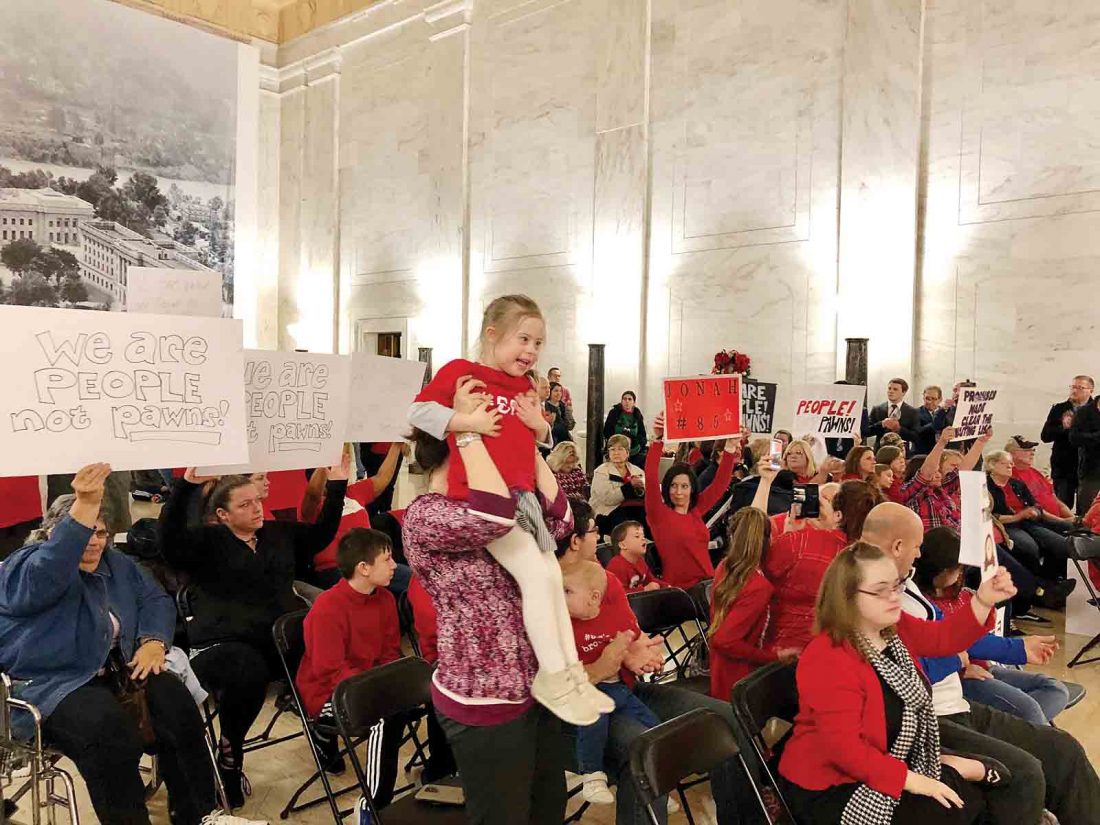 Families rally at the state Capitol in December calling for the I/DD waiver wait list to end. (Photo by Steven Allen Adams)

CHARLESTON — A day after the Senate Finance Committee passed its version of the budget with reduced funding for intellectual and developmental disability waivers, Gov. Jim Justice said he wants that funding restored.

Justice released a statement Thursday saying he would refuse to accept any proposed budget from the Legislature that didn’t include the $19.7 million increase to the I/DD waiver program to end the waitlist.

“I will not support a budget that does not include a full elimination of the I/DD waiver waitlist,” Justice said. “When it comes to the health and well-being of some of our most vulnerable men, women and children in West Virginia, I’m not interested in taking half-measures.”

The I/DD waiver program through the Department of Health and Human Resources allows individuals with intellectual or development disabilities to remain with family members instead of being placed in institutions and provides funding to assist with their care.

According to Justice, 1,060 families remain on the waitlist, including 600 children. The waiver program also costs 46 percent less than putting these individuals in state institutions.

“Many of these people have been waiting for more than four years now, which is far too long,” Justice said. “My proposed budget includes the funding to accomplish this goal.”

In his Jan. 8 State of the State address, Justice announced a $19.7 million increase in the I/DD waiver funding to eliminate the wait list. The additional money came from a Medicaid surplus due to a decrease in enrollment and an increase in the federal Medicaid match rate.

The Senate Finance budget includes $49 million in cuts, including reducing the $19.7 million increase in the I/DD waiver program by $10 million, which would eliminate half of the more than 1,000 people on the waiting list. Senate Finance Committee Chairman Craig Blair, R-Berkeley, said the governor’s increase would need to be sustained each year.

The Legislature can monitor the waiver program and possibly increase funding later in the year, Blair said.

“It was a noble idea what the governor was trying to do, but the fact of the matter is we could do $20 million and it would be base building,” Blair said. “That’s $20 million every year and it eliminates that wait list, but that wait list would re-appear again immediately. If we do $10 million this year on it, we can actually monitor throughout the year and see if the wait list grows even more.”

The House plan includes $45.1 million in cuts to the governor’s proposal, but leaves I/DD waiver funding untouched from Justice’s recommendation and adds additional spending. It also includes $39 million in improvements due to House bills that have passed, including $16.8 million for increased foster and kinship family reimbursement rates from House Bill 4092.

Steven Allen Adams can be contacted at sadams@newsandsentinel.com.