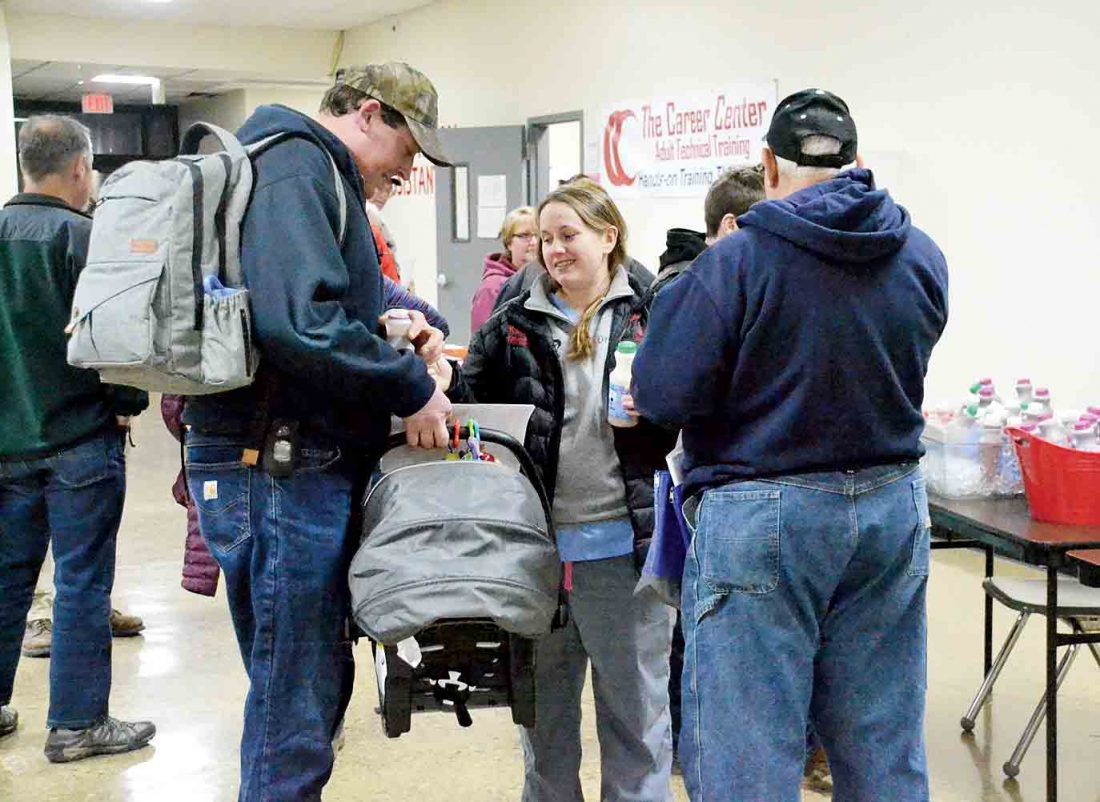 Generations of local farmers gathered at the Washington County Career Center Thursday for the annual Ag Night, organized by Marty Clark, to hear presentations on marketing and risk, taxes, grid sampling, industrial hemp as a cash crop, and farm inheritance and transition. (Photo by Michael Kelly)

MARIETTA – Most farmers would prefer to get out and plant crops, feed their cows or prune their apple trees rather than create spreadsheets on profit and loss or develop marketing strategies.

Those kitchen-table and office tasks, however, are essential to keeping the enterprise afloat, and Thursday night a gathering of 65 Washington County farm owners and operators got a dose of that reality at Ag Night. The annual event, organized by Marty Clark of the Washington County Career Center and supported by The Ohio State University extension office and numerous vendors and contributors, offered advice on matters ranging from risk management to growing industrial hemp as a cash crop.

“It’s a program that the career center adult technical training side offered back in the day; it went away for a while, but four years ago Marty Clark got with me to bring it back,” Marcus McCartney of the OSU extension office said.

Washington County farmers raise everything from row crops and dairy cattle to tree fruit and beef. They have in common the need to remain solvent while providing food that stocks the grocery store shelves of the nation.

Ben Brown, an assistant professor at OSU, offered a session on calculating risk.

“You make about 1,100 decisions a year, and every one of them carries risk,” he said. “You have to be able to plan and manage those risks.”

Brown clicked up a slide showing prices for corn, and another for soybeans, for specific dates of specific years, along with average prices at two points in the calendar during the years 2000-2019.

“One of these days I’m going to meet a wonderful woman, and she’s going to admit that I’m right 74 percent of the time. That sounds pretty good, doesn’t it?” he said. “In 14 out of these 19 years, the price for corn on May 15 was higher than it was Oct. 15. Seventy-four percent – that’s not bad, folks.”

Brown was addressing controlled risk. “Some years, it’s about minimizing your losses … you need an exit strategy,” he said.

Farmers, he said, need to know their production costs, their risks and their goals.

“Keep it simple,” he said, “and never do anything unless you write it down.”

“That’s one important session, things you have to know,” Stacey said. “You’ve got to know your production costs. And marketing, we (farmers in general) are poor at that.”

Breakout sessions offered after the keynote included grid sampling, transition strategies for keeping farms in the family from one generation to another, farm taxes, and growing industrial hemp.

The hemp session illustrated the nature of high risk – the crop is new, regulations are evolving, the markets are uncertain, and seed supply could be problematic.

Ed Brown from the OSU campus at Athens led that session, which attracted about a dozen people.

“It likes growing conditions similar to soybeans,” Brown said. “Banking could be an issue, so be sure to ask your banker. And make sure you source your seeds early, there could be a shortage.”

The hemp plant is of the same family as marijuana, but it lacks the tetrahydrocannabinol content that makes marijuana intoxicating. Until recently, it was subject to the same restrictions as marijuana growing, but with the legalization of medical marijuana, hemp can now be grown as a cash crop. It is a sturdy and versatile plant that can be used in clothing, rope and other fiber products, and the seeds serve as a source of CBD oil, which is widely thought to have medical benefits.

The THC content of the plants, however, is restricted to a maximum of 0.3 percent. “Anything more, you have to destroy the crop, and they will come to watch you do it,” Brown said, adding that use of nitrogen fertilizer needs to be done with caution because it tends to increase the THC production in the plant.

No pesticides are registered for use on hemp, and it will likely be two or three years before it becomes an on-label use, he said.

The mature plants can be taken off with the same methods used on hay, but the fibrous stalks can jam mechanical equipment, he said.

“It can be like throwing a rope into a harvester,” he said.

Aside from the informational value of Ag Night, it’s also one of those increasingly rare occasions when the farm community of the entire county gathers for an evening.

“The majority of our clientele are here tonight,” Sandy Lahmers of the Washington County Soil and Water Conservation District said as she stood at an information table. “It’s definitely an advantage, people see us.”

Stacey said such gatherings have become increasingly less common as farm people turn to other ways to stay in touch with one another.

Clark said organizing the event each year is something he does for sheer enjoyment of agriculture, having devoted decades to it.