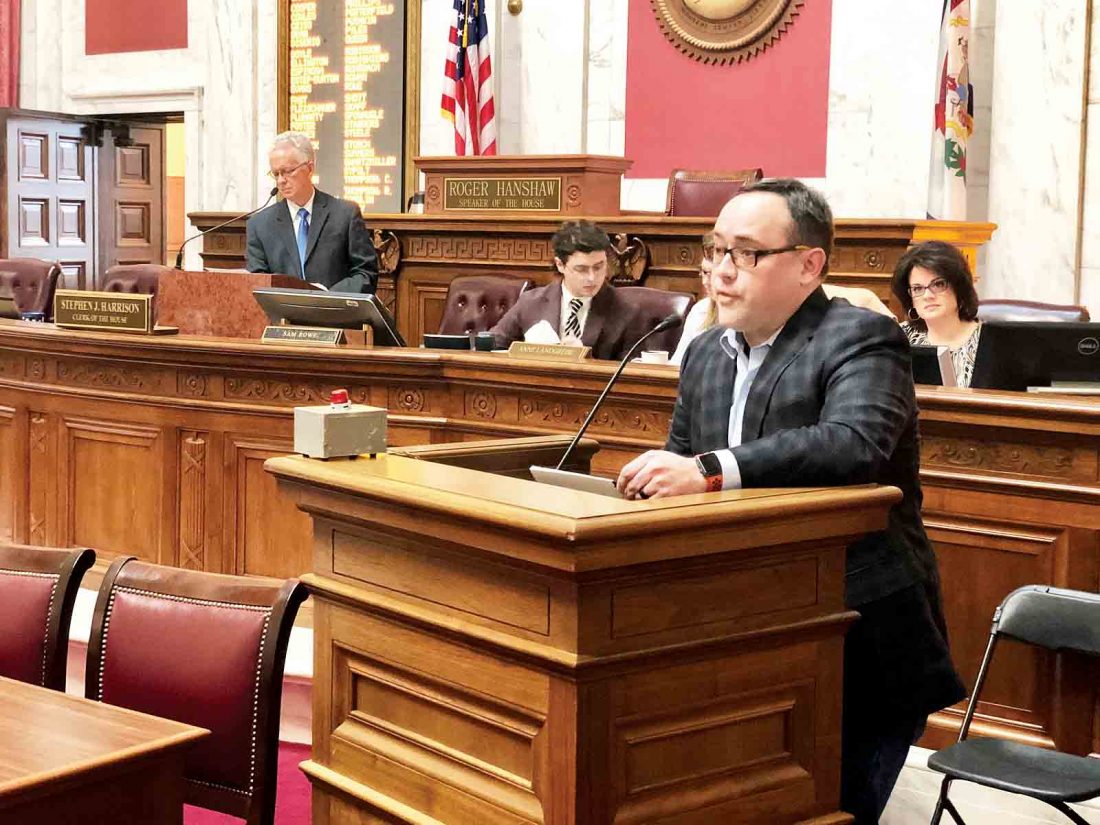 CHARLESTON — While a bill to create and put the functions of a new West Virginia law enforcement agency into the state code was being considered by the House Judiciary Committee Thursday night, the same committee heard civil liberties concerns about the legislation in a public hearing Thursday morning.

House Bill 4176 would establish the West Virginia Intelligence/Fusion Center and codify the operations of the center, address confidentiality and immunity from service of process and establish penalties and immunity from liability. The bill also creates legislative oversight, establishes civil liberty projections and adds a whistleblower statute.

According to the Department of Military Affairs and Public Safety, the Fusion Center allows local, state and federal law enforcement and public safety agencies to share resources, expertise and information. The agency works to prevent, detect, investigate and respond to all hazards, including terrorist and criminal activity.

The Fusion Center’s functions were set by executive order of former Gov. Joe Manchin in 2008, along with other executive orders over the years. HB 4176 codifies these executive orders for the first time, as well as provides civil liberties protection and legislative oversight to the agencies actions.

The committee held a public hearing on HB 4176 Thursday morning to receive comments from supporters and opponents of the bill. Jeff Sandy, secretary of the Department of Military Affairs and Public Safety, was part of the first fusion center in the United States as a special agent with the U.S. Treasury Department. He said the work of fusion centers saves lives.

Civil liberties organizations, such as the American Civil Liberties Union, have raised concerns about fusion centers over the years. The ACLU accuses fusion centers of data mining of a citizen’s personal online internet activity, using military resources for law enforcement in violation of the U.S. Constitution, lack of accountability, and excessive secrecy of its actions.

“It’s clear: the more information about people that is pooled and shared, the more we increase the risk of abuse,” said Joseph Cohen, executive director of the ACLU of West Virginia. “Is terrorism that much of a threat in West Virginia that we need to give up our privacy?”

According to a Reason Magazine article from 2016, a Utah fusion center sent a bulletin warning law enforcement agencies to be aware of people displaying the Gadsden Flag, a Revolutionary War-era flag known for its yellow background, slithering snake and the phrase “Don’t Treat on Me.” The flag has been used in recent years by the Tea Party movement, known for advocating against higher taxes.

A 2013 report by the Brennan Center for Justice at the NYU School of Law said fusion centers are often wasteful and commit numerous abuses with little to no governmental oversight.

“The policies and procedures governing such activities are often opaque or unavailable to the public, while a deliberately decentralized system produces rules that vary considerably across the country,” wrote report author Michael Price. “Inconsistent rules jeopardize the quality of shared intelligence and raise serious civil liberties concerns.”

In a West Virginia MetroNews article dated June 3, 2018, a series of emails from a Freedom of Information Act request released by the governor’s office included the unredacted name and cell number of a fusion center analyst with top secret clearance. The fusion center employee was monitoring social media at the request of former homeland security adviser Jimmy Gianato regarding construction in I-64 after several accidents resulted in fatalities.

On June 28, 2018, Cornelius, tweeting from the username “ByrdsFinger,” also named the fusion center employee and criticized the agency for monitoring civilian Twitter accounts for non-law enforcement purposes. The next day, Cornelius’ photo was sent to the security desk of the TransCanada Building in Charleston, which is home to the Fusion Center.

Someone took a photo of the security desk with Cornelius’ picture and sent it to Cornelius, who tweeted it out. According to a fusion center memo, the photo was removed from the security station shortly after.

“At no point then or since have I been contacted by law enforcement authorities, charged with a crime, sought for questioning or accused of any illegal act,” Cornelius said to committee members Thursday. “Quite simply, I am a critic of the governor and have pointed out publicly the use of the fusion center to surveil civilians without cause.”

Thom Kirk, deputy secretary of the Department of Military Affairs and Public Safety and a founder and former director of the fusion center, said that despite the fusion center memo, the agency was not looking into Cornelius.

“I can tell you that if that is what Mr. Cornelius said, that’s false,” Kirk said. “He is, to my knowledge, never been investigated by the West Virginia/Intelligence Fusion Center.”

“We revealed the name of an individual that had a top-secret security clearance that was an unbelievably good employee…having said that, the fusion center did not conduct an investigation of Mr. Cornelius,” Sandy said. “In regards to the photograph, we did not know at the time what was going to happen. As a result, at the security desk…they put Mr. Cornelius’ picture there just in case he would walk in so the employees could be notified.”