Jan Powell, right, applies a tourniquet to the arm of Mary Grubert as fellow members of the congregation watch during a Stop the Bleed training Monday in Marietta. (Photo by Janelle Patterson)

Katelyn Cline, right, applies a tourniquet to the arm of her sister Jessica during a Stop the Bleed training held Monday at the First Congregational Church in Marietta. (Photo by Janelle Patterson) 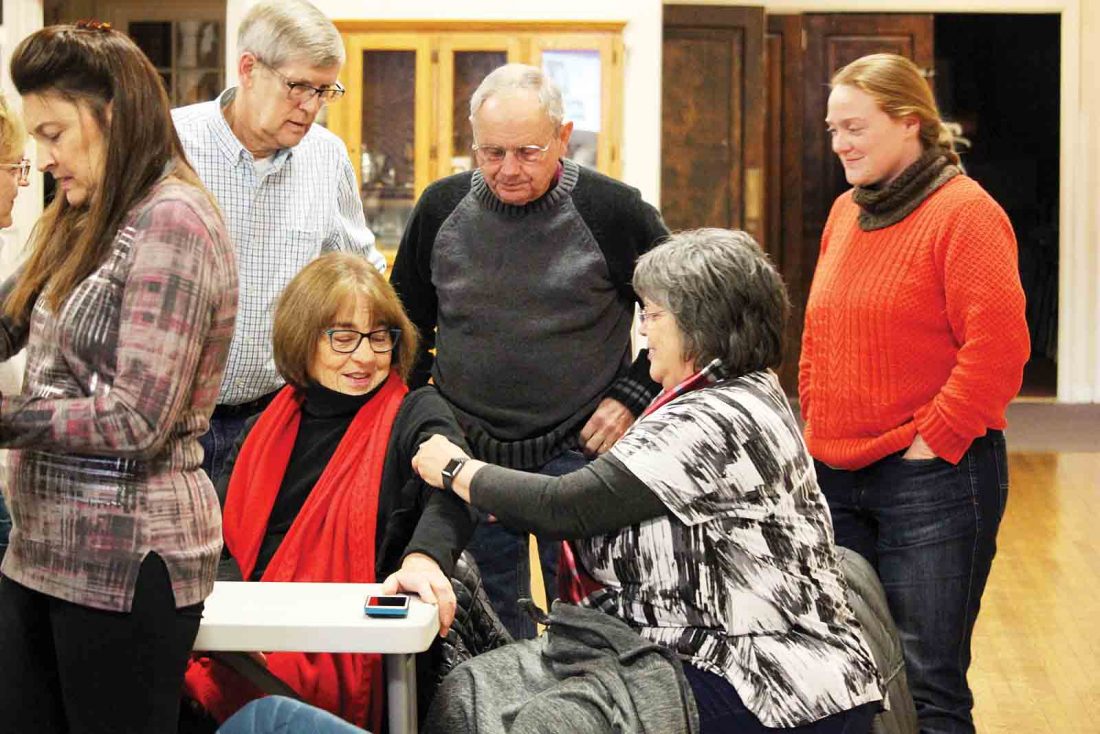 Jan Powell, right, applies a tourniquet to the arm of Mary Grubert as fellow members of the congregation watch during a Stop the Bleed training Monday in Marietta. (Photo by Janelle Patterson)

MARIETTA — A Stop the Bleed training program was held Monday at the First Congregational Church.

Stop the Bleed was developed by the American College of Surgeons and the Committee on Trauma to give laypersons the tools to stabilize injuries after an active-shooter situation.

It has been presented in schools across Washington and Wood counties by Memorial Health System and WVU Medicine’s Camden Clark personnel.

For the first time in Washington County, it was presented by a team from WVU at a church, the First Congregational Church.

“We’ve offered this in the schools, but this is the first church in Marietta, in Washington County, we’ve brought this to,” said Bill Cline, a surgeon and patron of the First Congregational Church. 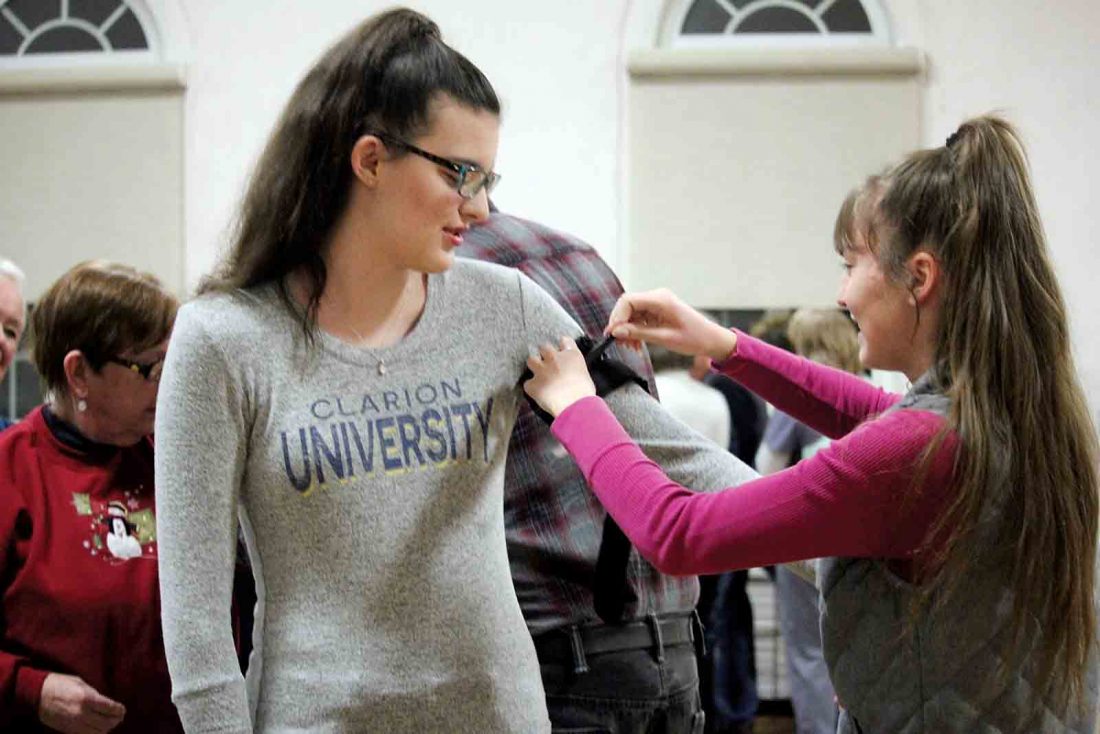 Katelyn Cline, right, applies a tourniquet to the arm of her sister Jessica during a Stop the Bleed training held Monday at the First Congregational Church in Marietta. (Photo by Janelle Patterson)

Twenty-two members of the congregation attended the free training program on to learn from Cline and Christina Dellinger, director of Trauma Services.

Jan Powell and Mary Grubert, both of Marietta, practiced applying tourniquets to each other during the second-half of the training.

“You know, I didn’t realize people died from bleeding in those horrible cases,” Powell said.

“That’s what bleeding out means,” Grubert said. “At work I definitely think about it, because I’m the first one you see.”

“Safety, safety, safety, never render aid until that danger is clear,” he said. “Personal protection not only from being accosted, but also dangers from exposing yourselves to bodily fluids is important.”

Then, Cline outlined the “ABCs” of stopping the bleed:

“Know your location, especially if you’re calling on a cell phone make sure to share your exact position,” he said.

Ascertain from where the bleeding is coming, such as from extremities, junctions or the torso.

“For the most part, bleeding in the torso cannot be controlled by these measures,” said Cline. “Those are the individuals needing immediate transport to a medical facility.”

“Pressure applied directly to the wound, it takes a lot of pressure to make this happen,” described Cline. “If you’re putting pressure on somebody’s limb, and they’re awake they’re going to tell you that it hurts — that’s OK. It’s supposed to hurt.”

After direct pressure, deeper wounds may still continue to bleed and require packing or the use of tourniquets, Cline said.

Never remove an impaled object, but to pack around it, Cline said.

Questions from the crowd began with of head injuries.

“Most head injuries your only salvage is immediate transport,” Cline said.

The second question was if and where the public can buy Stop the Bleed kits. Online, kits are available at amazon.com and StopTheBleed.org.

Then the group got hands-on training of which Cline’s twin daughters also were eager to practice.

“He’s run us through the general idea of what he’s teaching, but so far all of those trainings were for adults only,” said Kaelyn Cline, 18, of Marietta. “But this applies to more than just a stabbing or a shooting. If there’s a car accident you could be punctured by glass or if there’s a tornado there’s flying debris.”

The Rev. David Zerby, interim minister, said he hoped to offer more courses like Stop the Bleed training at the church that are open to the community, too.

For more information on the program, go to stopthebleed.org.