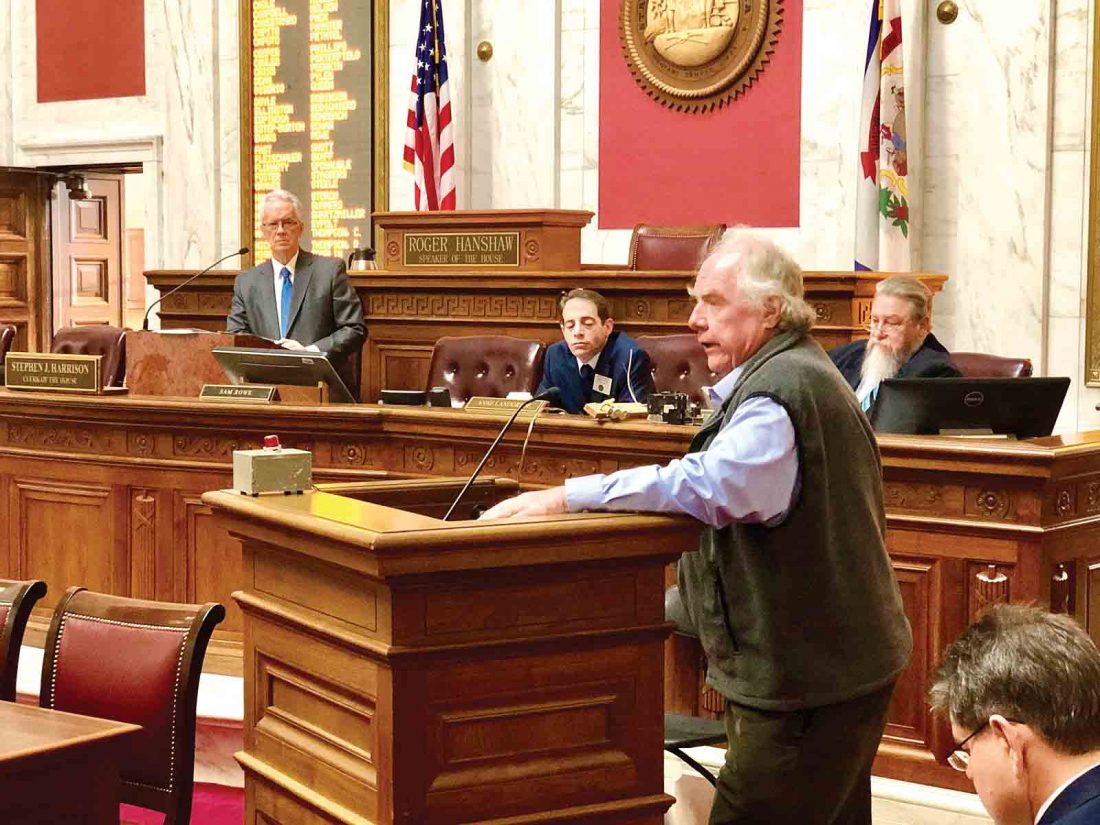 Jack Jamison, an electrical inspector from Morgantown, speaks against changes to the State Building Code to eliminate the need for arc-fault circuit interrupter breakers in homes. (Photo by Steven Allen Adams)

CHARLESTON — Opponents of a change to a fire code for new-home construction spoke Monday morning during a public hearing before the West Virginia House of Delegates Judiciary Committee.

House Bill 4276 is a rules bundle for the State Fire Marshal updating the State Building Code. The bill includes many updates, changes and revisions to the code, but one change has upset several interest groups.

If approved by the Legislature, the bill would remove the requirement for arc-fault circuit interrupter protection for new-home construction except for bedrooms. These breakers can detect electrical arcing in bad or damaged wiring and shut down power before the arcing can start a fire.

“The cost increase is pretty substantial,” Foster said. “Previously, (the code) has been changed to allow these AFCIs, but the AFCI is something that has not been proven to work correctly.”

“What if I wanted to change the color of my outlet? You’d have to change every single outlet in your house to white. When it’s replaced, it’s required that every single outlet have AFCI protection. It could either be done at the box with all-new AFCI breakers…or if you had an older fuse box that didn’t have the capability of accepting an AFCI outlet, you’d have to upgrade every box or put it on the first branch of every line, which is going to be a large labor cost.”

Contractor and insurance groups don’t agree and made their voices heard Monday morning. During the public hearing in the House Chambers, 10 people spoke against the rule change. Supporters point to data from the National Fire Protection Association showing that of the approximately 45,000 house fires each year, 69 percent involve electrical wiring in the home. The cost in property damage is more than $1.4 billion a year.

Paul Linger, an electrical contractor from Fairmont, said he uses AFCI breakers in all the work he does in North Central West Virginia.

“It’s a good safety product and I’d like you to leave it in the code and not remove it,” Linger said.

Jack Jamison, an electrical inspector from Morgantown, laid down examples of an AFCI breaker and an outlet attached to a wooden stud on a table. Jamison said the staple holding the wiring in place, if pinched, could easily damage the wire and cause arcing. An AFCI breaker would stop the arc before it ignites nearby insulation or wood, causing a fire.

“AFCI breakers and receptacles have proven themselves, have been through third-party testing laboratories,” Jamison said. “The persons who are opposing AFCI protection in other rooms do not realize how easily electricity could cause a fire. There’s dozen of ways to do it wrong, but there’s one way to do it right.”

Tim McClintock, representing the National Electrical Manufacturers Association, said the number of house fires attributed to electrical issues between 2008 and 2017 decreased by 14 percent. There was a 19 percent decrease in the number of deaths, which he credits with the use of AFCI breakers in homes.

“Rolling back these important safety requirements is similar to proposing to remove traffic lights despite the number of traffic accidents being reduced,” McClintock said. “The House has the opportunity to stand up for the safety of all West Virginia residents by not allowing these rule changes to proceed.”

Judiciary Committee Chairman John Shott, R-Mercer, said the committee would be taking up the rules from the State Fire Marshal’s Office later this week.