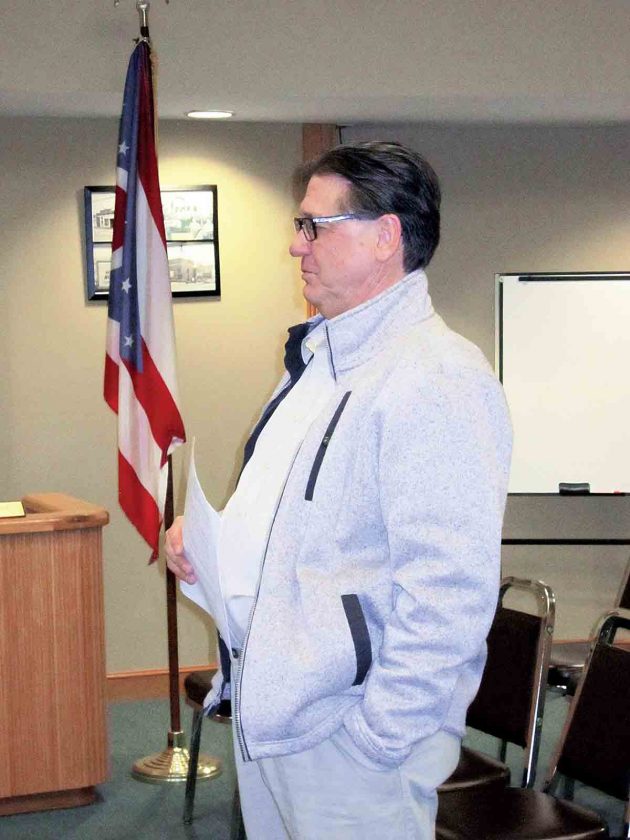 Jim Raney, secretary of the Humane Society of the Ohio Valley’s board of directors, talked Monday with Belpre City Council’s Finance and Audit Committee about the idea of an annual contract between Belpre and HSOV for the society’s animal control services. The HSOV currently has such contracts with Washington County and the city of Marietta. (Photo by Wayne Towner)

BELPRE — The city of Belpre is taking action to create a city-owned impound lot for cases involving vehicles impounded by city law enforcement in some situations.

Belpre City Council voted Monday to approve the first reading of an ordinance establishing a city-owned impound lot and authorizing the safety-service director to establish fees and policies before vehicles can be released from the lot back into their owners’ possession.

Two more readings will be held at future council meetings.

City Law Director Tom Webster said the impound lot, which would be located near the city sewer plant, would be for vehicles seized by police due to criminal offenses, not for general traffic offenses or parking tows. Private towing companies currently handle such vehicles, but council decided in 2019 to look into establishing its own impound lot, he said.

Prior to the start of Monday’s council meeting, the Finance and Audit Committee met to hear a funding request from the Humane Society of the Ohio Valley in Marietta and to discuss an update to the city’s credit card policy requested by the state auditor’s office to bring the city ordinance in line with updates to the state code.

Jim Raney, secretary of the HSOV board of directors, said he wanted to ask council to consider joining Washington County and the city of Marietta in entering into a contract for animal control services between Belpre and the society.

The HSOV currently receives about $58,000 per year from Washington County and $17,400 from the city of Marietta for HSOV services under contracts with those entities, he said. Those per capita amounts are based on population and a similar contract with Belpre would be estimated at $6,700 per year, Raney said.

Belpre currently has a contract with the county through the county dog warden’s office for $2,400 per year for stray dogs, primarily to cover after-hours callouts for the warden to Belpre. Raney said the proposed contract would involve all of the HSOV’s services, adding those for cats which are not covered in Belpre’s current contract.

Those services include: housing and caring for all animals delivered to the shelter by authorized agents of the city; notifying known owners of the impoundment of their animals; releasing licensed dogs to authorized owners; adoption services; and investigating complaints of abuse, cruelty or neglect.

Councilman Timothy Gant, filling in for committee chair Dave Ferguson, thanked Raney for his presentation and said the committee and council will be reviewing the request.