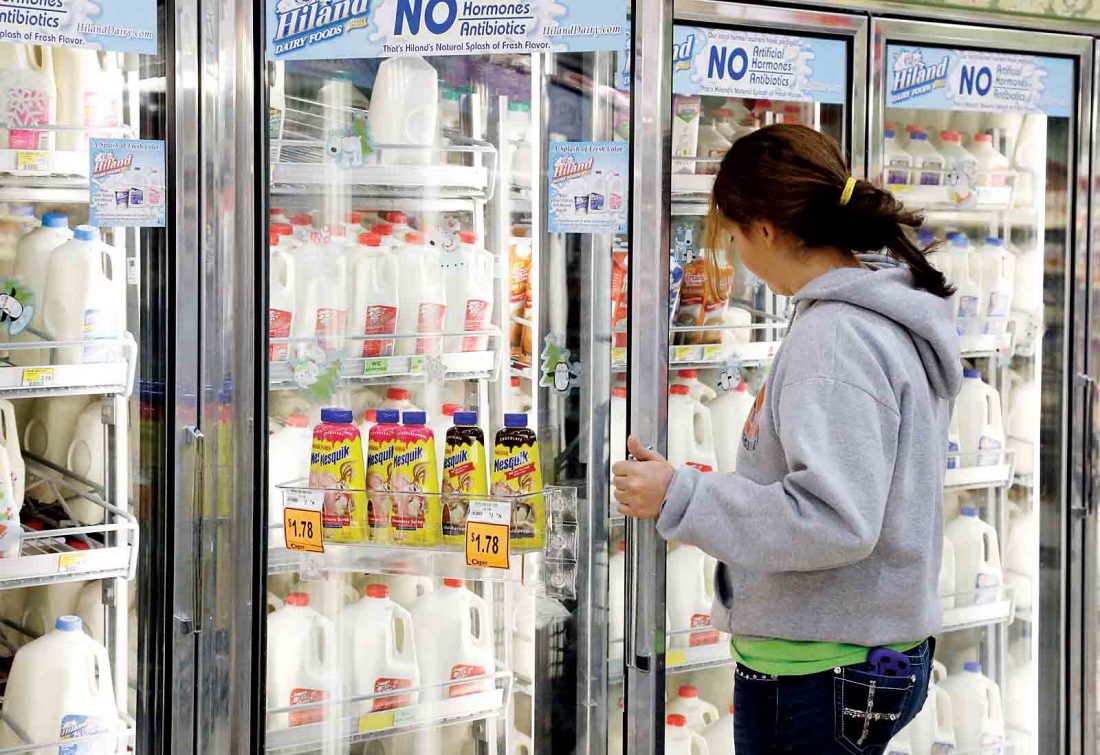 Jessica Walton, of Guthrie, Okla., reaches for a container of milk at a grocery store in Edmond, Okla. On Tuesday, Dean Foods, the nation's largest milk processor, filed for Chapter 11 bankruptcy protection and said it may sell the company off to the Dairy Farmers of America. (AP Photo)

MARIETTA — The company which owns Broughton Foods in Marietta has filed for bankruptcy and the impact locally is uncertain.

Dean Foods Company, based in Dallas, announced Tuesday it and substantially all of its subsidiaries have initiated voluntary Chapter 11 reorganization proceedings in the Southern District of Texas.

”The company intends to use this process to protect and support its ongoing business operations and address debt and unfunded pension obligations while it works toward an orderly and efficient sale of the company,” according to a press release issued by the company.

The press release said Dean Foods announced it is engaged in advanced discussions with Dairy Farmers of America Inc. regarding a potential sale of all assets of the company.

Dean Foods is operating in the ordinary course of business and remains focused on providing its customers with wholesome, great-tasting dairy products and the highest levels of quality, service and value, the press release stated. The company has received a commitment of approximately $850 million in debtor-in-possession (DIP) financing from some of its existing lenders, led by Rabobank.

Following court approval, the company expects to use the DIP financing, together with cash on hand and operating cash flows, to support its continued operation throughout this process, including payment of employee wages and benefits without interruption and payment to suppliers and vendors in full under normal terms for goods and services provided on or after the filing date, according to the press release.

“The actions we are announcing (Tuesday) are designed to enable us to continue serving our customers and operating as normal as we work toward the sale of our business,” said Eric Beringause, Dean Foods president and chief executive officer, in the press release. “We have a strong operational footprint and distribution network, a robust portfolio of leading national brands and extensive private label capabilities, all supported by approximately 15,000 dedicated employees around the country.

”Despite our best efforts to make our business more agile and cost-efficient, we continue to be impacted by a challenging operating environment marked by continuing declines in consumer milk consumption. Importantly, we are continuing to provide customers with an uninterrupted supply of high-quality dairy products, as well as supporting our dairy suppliers and other partners.”

Messages left for Broughton’s company offices in Marietta were not immediately returned Tuesday.

Andy Kuhn of the Southeastern Ohio Port Authority said he heard about the news on Tuesday and had no idea how this will impact Broughton’s business locally.

Kuhn said in 2016 Broughton employed around 200 people, but he did not have a current count of employees.

Broughton operates plants in Toledo, the Dayton/Springfield area and Marietta in Ohio, he said.

Kuhn said there has been a trend of local dairy farms ceasing operations.

”People are drinking less milk and consuming less milk-related products,” he said. The emergence of almond milk and other milk alternatives have also impacted the dairy business.

Doug Miller of the USDA Farm Service Agency office in Marietta said he could not comment directly on the Dean Foods situation, but said Washington County has seen a decline in dairy farm operations in recent years which follows a trend officials are seeing nationally.

”In general, Washington County lost several dairy farms in the last two to three years,” he said, adding operations ranged from having 30-40 heads of dairy cows to around 200 heads.

Many dairy operations are struggling while others are trying to diversify their business to continue to operate, he said.

The cost of production has gone up while the price of milk has been coming down, Miller said of many dairy farms.

”They are not making money and can’t stay in business,” he said.