More than 200 members of the community walk laps around the Parkersburg City Park Thursday to encourage a healthy lifestyle and support the cause. (Photo by Madeline Scarborough)

From left, Monica Davis, Cameron Tachy and Teagan DeMoss stand for photos with Walk Chair Steve Altmiller after receiving awards for being the top fundraising walkers. (Photo by Madeline Scarborough) 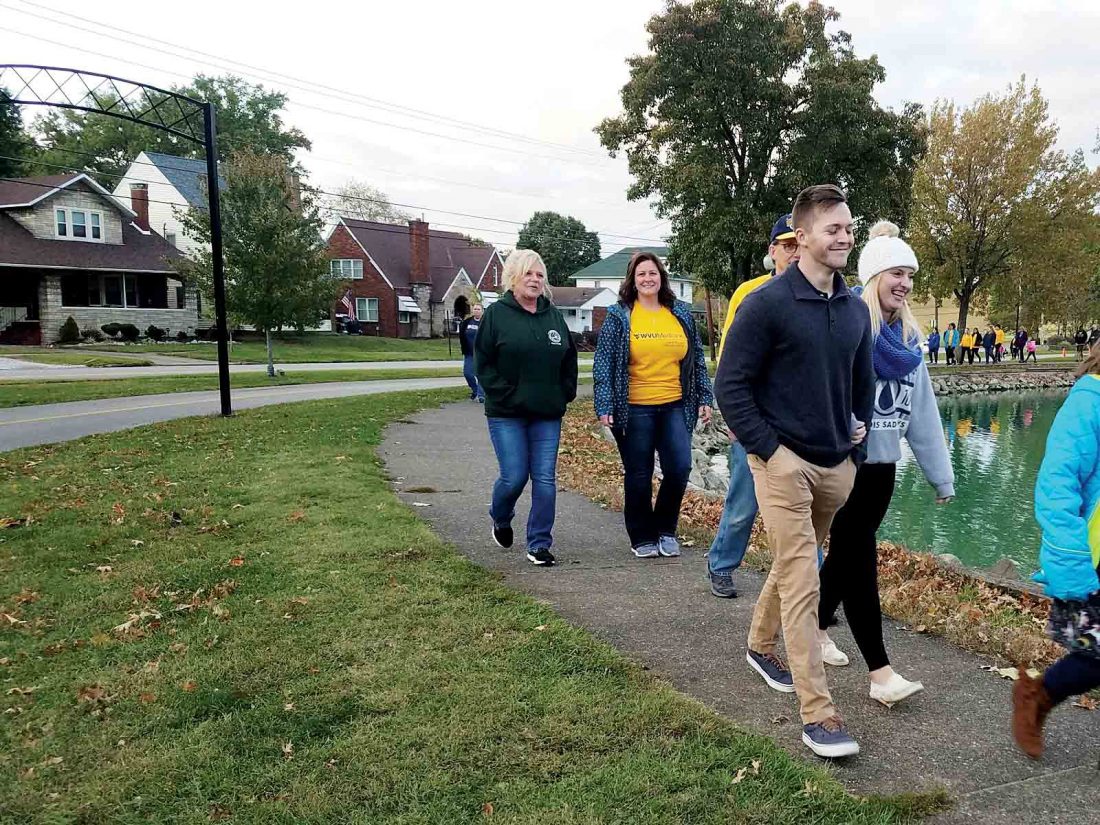 More than 200 members of the community walk laps around the Parkersburg City Park Thursday to encourage a healthy lifestyle and support the cause. (Photo by Madeline Scarborough)

Thursday over 200 members of the community came together to fight against cardiovascular disease at City Park in Parkersburg.

Cardiovascular disease, which includes heart disease, hypertension and stroke, is one of the top killers worldwide and nationally is recognized as the number one killer of women, according to the American Heart Association.

In West Virginia, 5,000 people die from heart disease and 1,100 from stroke each year, the American Heart Association said. 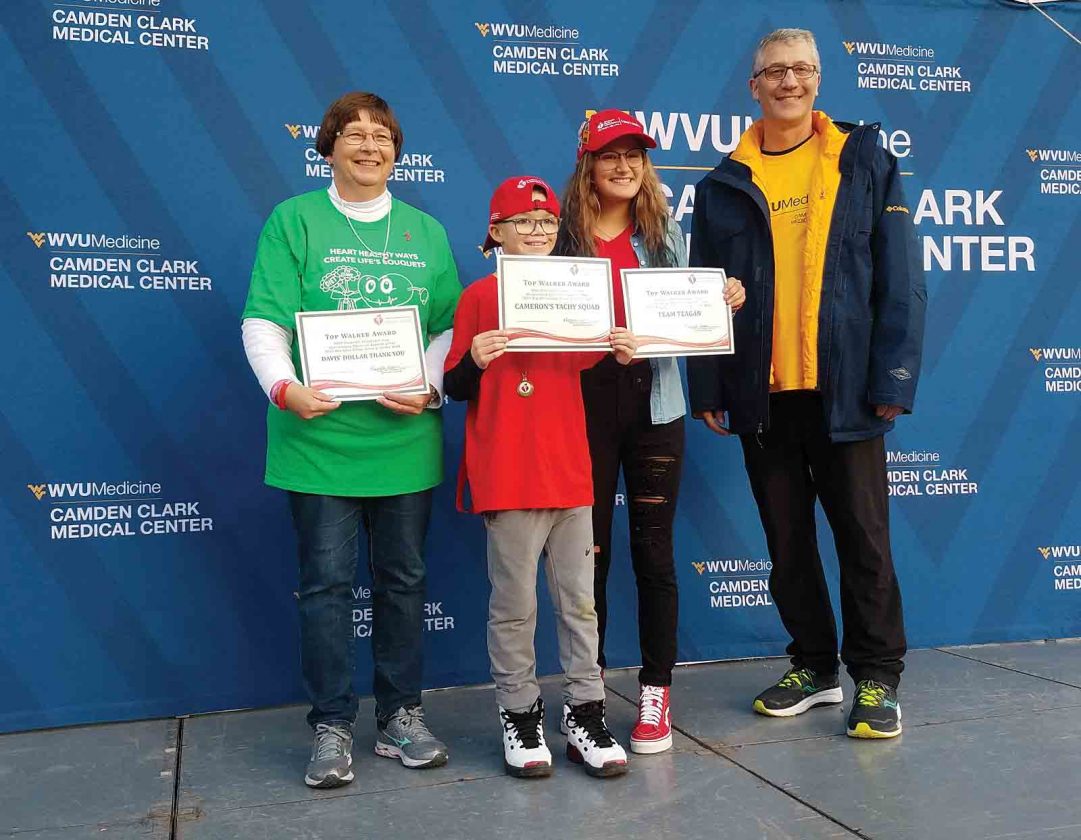 From left, Monica Davis, Cameron Tachy and Teagan DeMoss stand for photos with Walk Chair Steve Altmiller after receiving awards for being the top fundraising walkers. (Photo by Madeline Scarborough)

Each year a fundraising goal is set, and this year that amount was $50,000.

Michelle Loehr, development director for the American Heart Association in Charleston, said the goal has been passed.

This year’s top fundraising groups were: 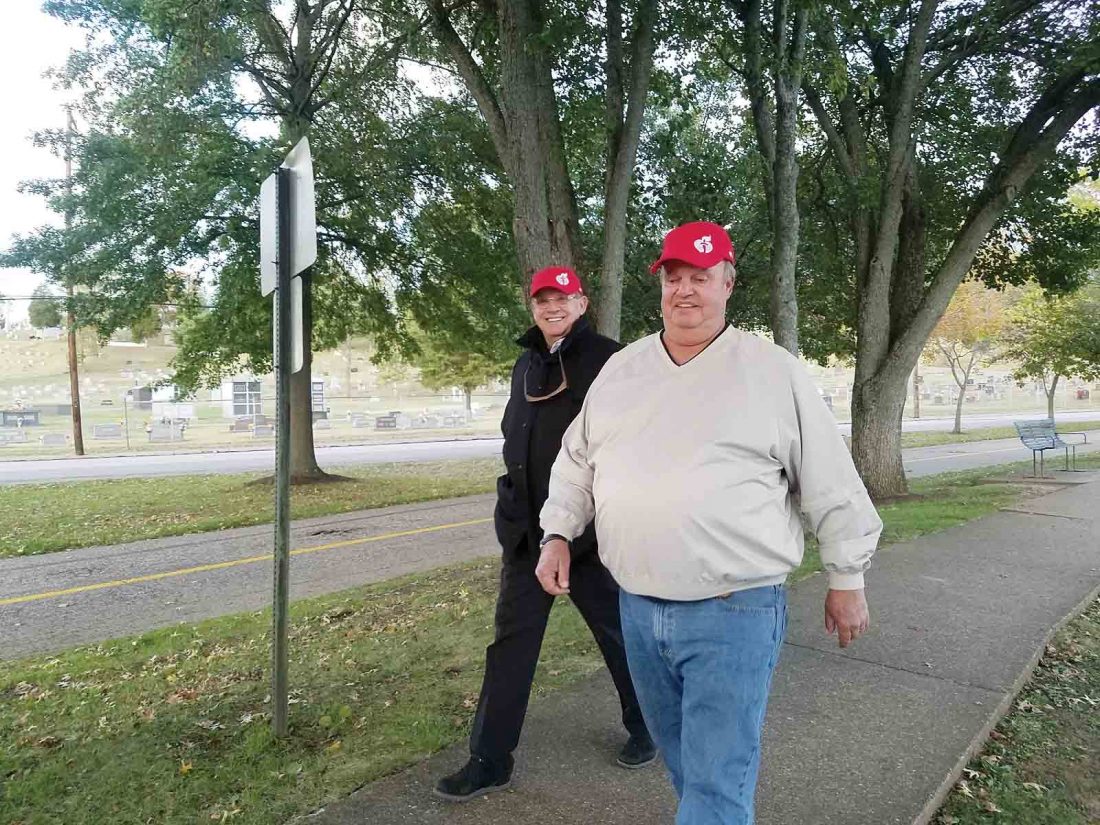 This year’s top fundraising walkers were:

The exact dollar amounts for groups, walkers and the event itself were still being calculated Thursday night.

“Funds raised will help fund innovative research for new treatments, provide programs and services for survivors and their families, and help more of our loved ones lower their risk,” said Loehr.

Each year the Mid-Ohio Valley Heart and Stroke Walk picks someone local to honor and share their story to the community.

This year’s honoree is Joe Kiger, of Washington, W.Va., who has suffered two heart attacks and received 10 stent placements.

A stent is a tubular support placed temporarily inside a blood vessel, canal, or duct to aid healing or relieve an obstruction.

“I appreciate being the honoree, but I stand on this stage and see so many survivors who have been through more than I have,” said Kiger.

Kiger encouraged those in the crowd to urge their friends and families to get checked for heart disease, and not ignore the signs.

Many survivors were out sharing their stories with one another and walking in hopes of a healthy life.

“I didn’t realize I had a heart problem, but my family physician noticed my heartbeat was irregular,” said Gary Ritenour, who after being checked found he had a weak heart.

Other survivors weren’t as lucky as to have a doctor notice before a problem occurred.

“I was working at Franklin Elementary when I collapsed in the hall with cardiac arrest,” said Monica Davis.

Davis said a co-worker heard the collapse and by the time she made it to Davis, she had already starting turning blue.

“She began CPR, and an AED was used on me twice in the hall and once in the ambulance,” said Davis.

Davis ended up having one stent placed.

Of those just walking who were not survivors, many said they had a loved one who had been affected by cardiovascular disease.

“It changes everything when someone you know and love is affected,” said Courtney Stuttler, whose grandfather suffered a stroke.

Next year’s event chair will be Dr. Geoffrey Cousins, who said he looks forward to another successful year of fighting back against cardiovascular disease.