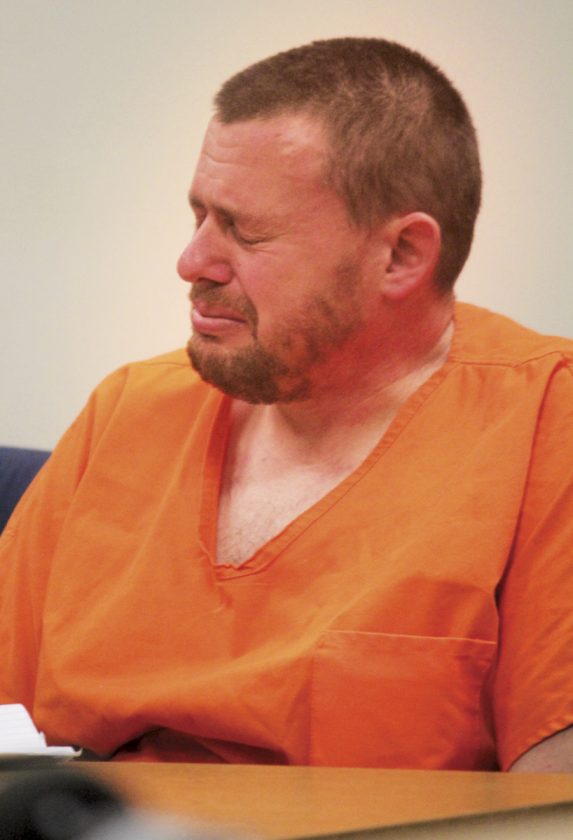 Photo by Michael Erb Stephen Griffith fights back tears Monday during a sentencing hearing in Wood County Circuit Court. Griffith was convicted of involuntary manslaughter and wanton endangerment in the shooting death of Chad Hart in 2017. Griffith was sentenced Monday to six years in prison.

PARKERSBURG — A judge has ruled Stephen Griffith will serve six years in prison for the 2017 shooting death of Chad Allen Hart.

Griffith was sentenced Monday morning in Wood County Circuit Court to five years on a felony count of wanton endangerment and one year on a misdemeanor count of involuntary manslaughter. Judge Robert Waters said the sentences will be consecutively served with 23 days credit for time served.

A third charge of misdemeanor brandishing was dismissed after the defense argued it was included in the wanton endangerment charge. The brandishing charge would have carried a maximum one-year sentence.

Griffith, 35, of Davisville was charged in the May 7, 2017, shooting death of Hart, 38, of Parkersburg, outside the Overtime Bar on Emerson Avenue in Parkersburg. He was convicted last month on the three counts during a jury trial.

Waters on Monday rejected motions by the defense to overrule the jury conviction and to hold a new trial. Waters said the verdict could be appealed.

Defense attorney Bill Merriman argued Griffith had no prior criminal record, no history of drug or alcohol abuse, and he was not a threat to the community.

“Does Wood County, W.Va., need protected from Stephen Griffith? My argument would be no. The facts in this case indicate no,” Merriman said.

Merriman said the shooting occurred after Griffith attempted to intervene in an argument between Hart and another person, and the situation escalated.

Wood County Prosecuting Attorney Pat Lefebure said Griffith’s past had little to no bearing on the case at hand, and Griffith was responsible for firing a shot through the back window of Hart’s truck, killing him.

“It’s not (Griffith’s) past history that demands incarceration,” Lefebure said. “It’s his actions.”

Griffith read a prepared statement prior to sentencing, saying he regretted Hart’s death and his family’s loss. Griffin asked for leniency, saying his conviction placed an emotional and financial hardship on his loved ones.

“I am the primary provider for my family,” he said. “I have multiple family members and loved ones who depend on me for many different things.”

Hart’s mother Sharon Hart also spoke prior to the sentencing, saying while family members were not satisfied with the charges against Griffith, they would still ask for the maximum penalty to be applied.

“I’ve been through this for almost three years. Mr. Griffith has hardship? He doesn’t know hardship,” Sharon Hart said. “Chad’s three children were left without a father. His first grandson was left without a grandpa. And Stephen thinks he should walk the streets? No sir. I’m hoping you will give him the full amount of time you can give him. I don’t feel he is getting enough as is.”

Waters said the nature of the crime and its devastating impact left little to no choice in the sentencing.

“This crime involves the death of another human being,” Waters said. “We can’t get away from the fact that because of the actions of Mr. Griffith on that night, that Chad Hart is deceased and he was unlawfully killed.”