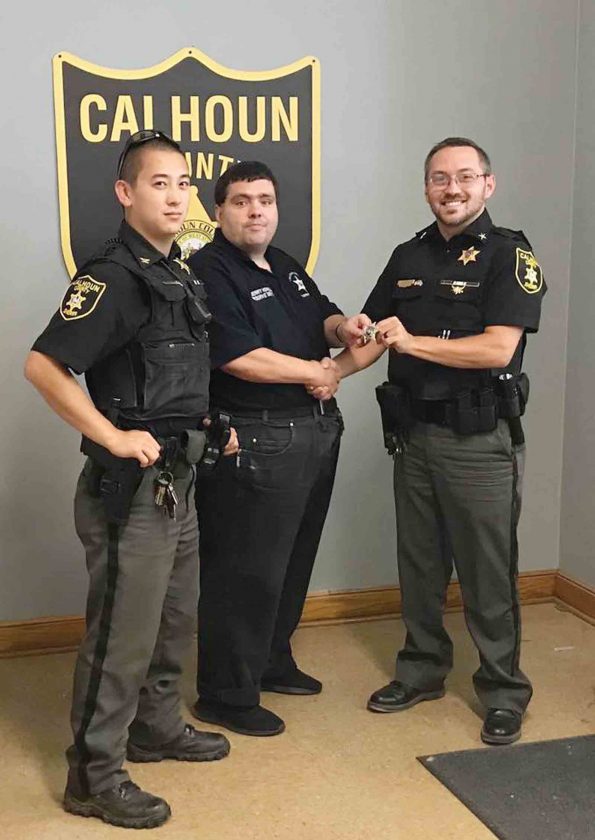 GRANTSVILLE — The Calhoun County Sheriff’s Department, upon approval of the County Commission, has appointed its first Reserve Deputy, Jerry Howell, as part of the Reserve Deputy Unit.

According to Calhoun County Sheriff Jeff Starcher, the program is set up for volunteers to provide non-law enforcement services to the community. These people “can do transports, court security details, serve civil process (and) direct traffic during parades,” Starcher said. Reserve deputies will be permitted to use a department vehicle while on duty, Starcher said.

The commission voted on the project earlier this year under Starcher’s suggestions. He said that the program was modeled from other counties, Clay and Jefferson.

Being that Clay is a county of similar size and demographics, Starcher felt that it would be beneficial for the county to try the program to “save money for additional personnel.”

The idea is for the reserve deputies to perform duties that would help free up sworn in officers to respond to calls and “service that they wouldn’t have time to do otherwise,” Starcher said.

To be considered for the program, citizens have to be able to pass an extensive background check and go through the same hiring procedures that a deputy sheriff would have to go through, Starcher said. According to the state code, every officer must receive training but it is optional to receive training on the job or at an academy. A required number of hours currently isn’t set.

Since its start, the program has been successful, Starcher said. “Because we’re a small agency, (Howell) has taken quite a load off of us.” The Sheriff’s Department hopes to appoint no more than one or two reserve deputies.

Starcher said a big part of the decision was based on the two festivals that take place in the county, the Wood and Molasses festivals.

“Traffic control is always an issue. Having some reserve officers will help block off the many routes needed to safely navigate the parade,” Starcher said.

Sobriety checkpoints are another way that reserve officers will come in handy. “Reserve officers could stand out in the road and wave people through and direct them to a sworn officer if there were any issues to make things go just a little bit more smoothly,” Starcher said.

When it comes to clearing traffic, congested areas and events including school functions, homecoming, graduation and the high schools. Starcher said the reserve officers will assist in “getting people cleared out faster and more safely.”