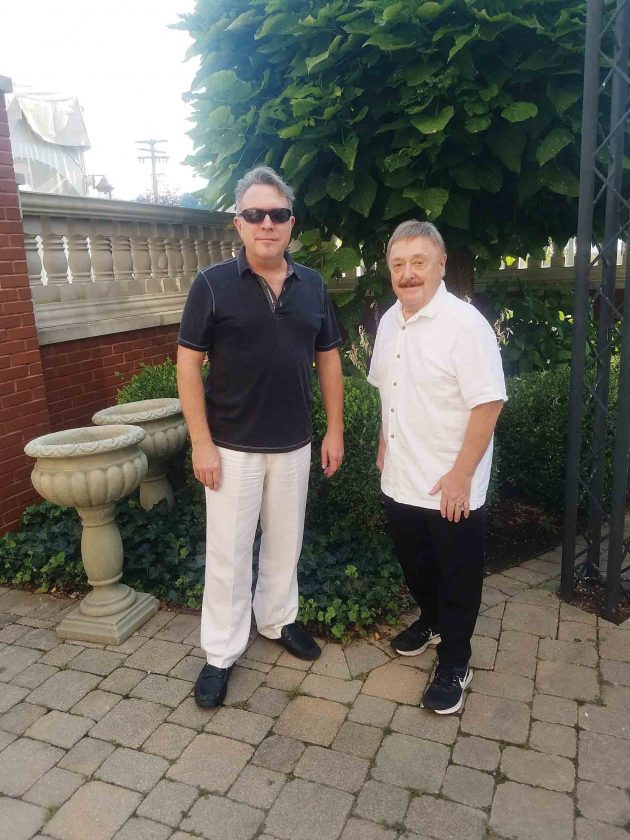 Lee Eric Rector, left, and Wayne Waldeck, the new owners of the Blennerhassett Hotel, stand in the courtyard Friday following an informational meeting for current employees. (Photo by Madeline Scarborough)

PARKERSBURG — The Blennerhassett Hotel will soon be under new ownership, with a goal of raising the profile of the historic downtown Parkersburg hotel.

Mid-Ohio Valley businessmen Lee Eric Rector, owner of Lee’s Studio, and Wayne Waldeck, co-owner of Wal-Bon Corp. which operates McHappy’s and Napoli’s, announced Friday they are purchasing the hotel at Fourth and Market streets from Sam Ross and family, who have owned it for more than two decades.

“We’re thankful that Sam has selected us to take the hotel forward and are extremely excited to announce that the hotel will soon feature a world-class medi spa and fine-dining experience,” Waldeck and Rector said in a press release Friday.

Rector said the Ross family and himself had started discussions years ago about adding a spa into the hotel, and the conversation grew from there.

Rector, who has 37-plus years of experience in the spa business, will direct the medi spa, which will offer all services Lee’s Studio currently offers.

Rector said the hotel’s medi spa will eventually be the only location for Lee’s Studio.

With more than 53 years experience in the food service industry, Waldeck will oversee food service operations, which will feature chef-created menus, including those developed by visiting guest chefs, as well as fine and casual dining.

The new owners’ plan for the hotel to be “a premiere destination for local day visitors, families, tourists and business travelers, offering exquisitely decorated and comfortable luxury rooms … events, conference and business accommodations among other amenities,” the release says.

The hotel also will continue as a venue for banquets, weddings, parties and receptions.

“Our plans include adding another star to the hotel’s three star rating, with the ultimate goal of becoming West Virginia’s second most well-known hotel,” Waldeck said in the release. “None of this can be accomplished without a dedicated staff, and the Blennerhassett team will consist of professionals who will make this happen.”

Some incumbent staff members in certain positions will be retained, while applications will be taken from the general public and employees for new supervisory positions, the release said.

Applications will be accepted through Sunday.

Parkersburg Mayor Tom Joyce said the hotel has been a catalyst for downtown investment over the last two decades and he’s looking forward to its future under the guidance of Rector and Waldeck.

“Both gentlemen have proven to be innovative, dedicated business leaders, and I am excited for them and our downtown,” he said. “I also want to thank the Ross family for their many years of substantial investment in the hotel.”

City Councilman J.R. Carpenter, whose district includes the downtown area, said it’s great news that the hotel will remain in local hands, “especially local hands that care about the community and downtown vision.”