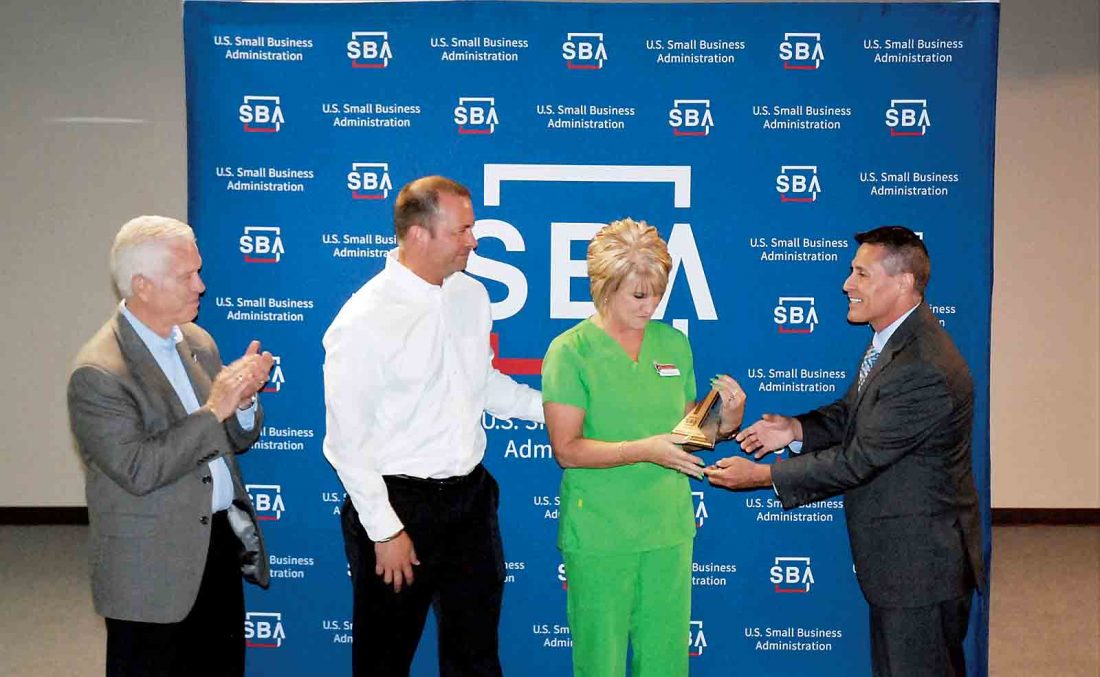 BELPRE — Since its inception in 2011, Boxers Bed and Biscuits has provided dog and cat boarding, day care, grooming and love to pets and their owners.

On Monday, the U.S. Small Business Administration Columbus District recognized Angela Beck, owner of Boxers, for her efforts to invigorate her bottom line and her community’s economic future.

The SBA’s Spark Award spotlights successful business that provide growth in the community as well as in their own operations. The award isn’t given out annually, it is given out to those entrepreneurs that have reached out to the SBA about their positive impact to the area they serve.

“Small businesses are the building blocks of the community,” said Brooke DeCubellis, public affairs specialist at the SBA.

She said her district, which covers 60 counties in Ohio, has only given out the award two other times before Monday, and reserves it for businesses that have gained the respect of their neighbors.

“We go off the recommendations of people in the community … giving it to the ones that make up the economic fabric of the community,” she said.

Beck said becoming a success hasn’t been easy. She said after showing her business plan to several local banks, she was denied financing for Boxer’s.

“Five maxed out credit cards later, Boxers Bed and Biscuits was born in a small house in Little Hocking,” she said.

After moving to a location on Braun Road in Belpre due to growth, Beck set her sights on the long vacant Middleton Doll factory on Washington Boulevard.

“I certainly wasn’t buying this 50,000 square foot warehouse with those same five credit cards,” she said.

Despite the banks’ reluctance to believe in the public’s interest about a business like Boxers, Beck said their two locations provide services to approximately 250 animals a day.

The growth of her business has created 54 jobs including caregivers, groomers, marketing, veterinary techs and a veterinarian.

“And we’re not done hiring yet,” she said. “When my employees’ paychecks are being spent at other local businesses, we all win.”

U.S. Rep. Bill Johnson, R-Ohio was there to honor Beck and said being a small business owner helped him understand the commitment made by Boxers and made him admire Beck even more.

“That start-up phase is incredibly difficult,” he said. “It takes a community to spur economic development.”

Washington County Commissioner David White said more businesses like Beck’s need to be in the county.

“This is a highly innovative business. It’s great for Belpre and great for the county,” he said. “If we had 20 entrepreneurs like (Beck) in this county, this would be one of the best places to live in the country.”

Belpre Mayor Mike Lorentz said Beck and her husband Rob’s fortitude is what made Boxers a success.

“I give you all the credit. You are amazing people,” he said. “She is the most tenacious person I have ever met.”