Photo provided by Wally Kandel Kathy Schalitz gives the thumbs up in the Allis Chalmers she drove to establish a new land speed record for tractors on June 2 in Blytheville, Ark.

Photo provided by Wally Kandel The Archer family and friends spent more than a year modifying this 1961 Allis Chalmers D-19 to break the speed record for tractors June 2 in Blytheville, Ark. 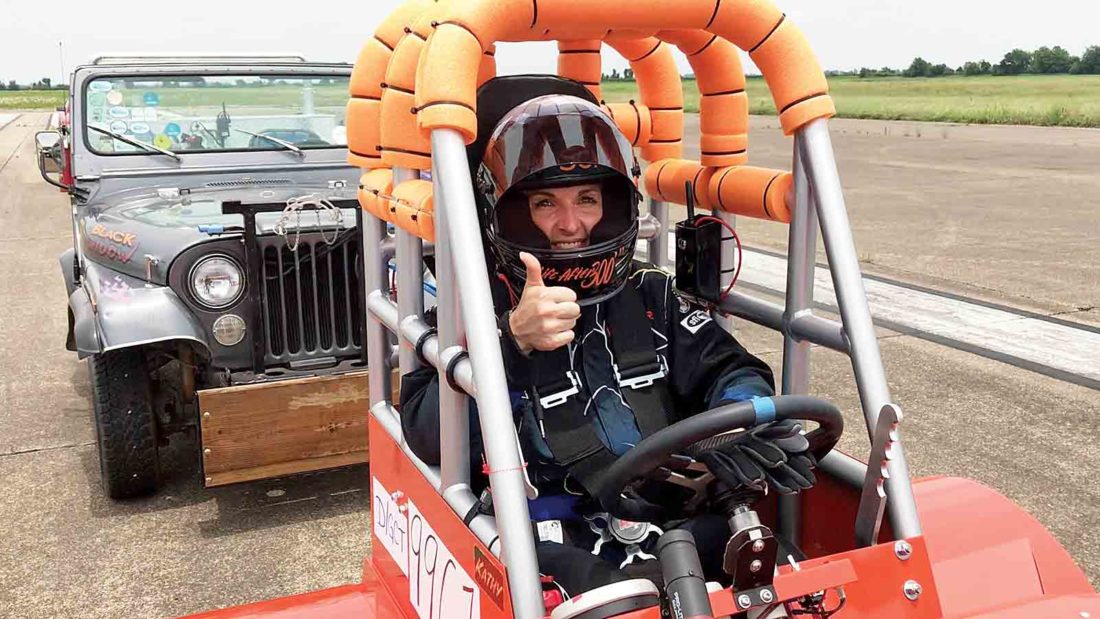 Photo provided by Wally Kandel Kathy Schalitz gives the thumbs up in the Allis Chalmers she drove to establish a new land speed record for tractors on June 2 in Blytheville, Ark.

MARIETTA — A Marietta resident and his family and friends spent a year modifying a 1961 Allis Chalmers D-19 to go from pulling a plow to pushing the envelope.

But Dave Archer enjoys a challenge.

On June 2, the farm implement went through the one-mile marker on the runway of a former Air Force Base in Arkansas at 108.5 mph, establishing a new land-speed record for tractors.

The driver was Archer’s daughter, Kathy Schalitz. Driving modified farm machines is nothing new for the 37-year-old, but it’s the first time she’d driven a tractor built for speed rather than pulling power.

“I thought it would be really neat to see how fast a tractor could go down a race track,” Schalitz said Monday. “This doesn’t sound normal, but it’s normal for us.” 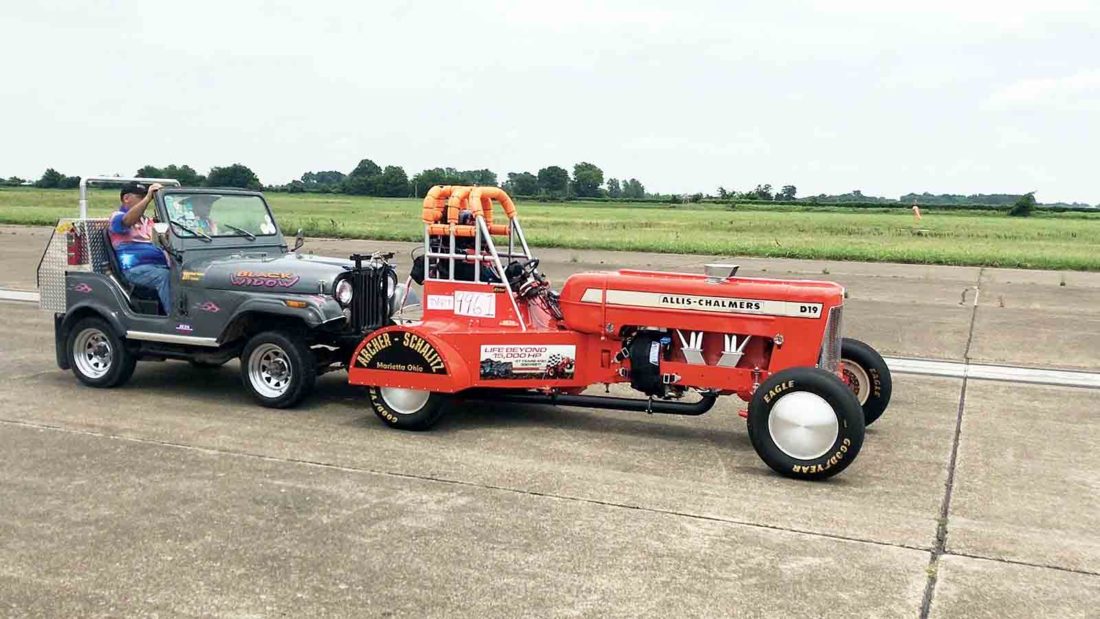 Photo provided by Wally Kandel The Archer family and friends spent more than a year modifying this 1961 Allis Chalmers D-19 to break the speed record for tractors June 2 in Blytheville, Ark.

The Archers are the architects and operating crew of international champion pulling tractors, including a five-engine, 15,000-horsepower monster, Black Widow, that won numerous tractor pulls across the country, driven by Schalitz. She’s been involved in the family sport since she was a teenager, and it’s taken her around the country and twice to Europe.

The speed project, which in many ways is the opposite of tractor pulling, began as an idea Archer, 73, hatched after a double lung transplant two years ago in the Cleveland Clinic. With a long recovery ahead, Archer said, he knew he needed something involving a goal to keep him focused and occupied.

“To me, it was therapy,” he said. “Last winter, I’d go out there at night and work on it. I had a lot of help, especially from my wife, Arlene. She’s built a lot of unusual tractors.”

The speed record at that time was 101 mph set in 2015 by former NASCAR driver Jack Donahue in a 1953 Ford tractor powered by a V-8 flathead.

The work on the Allis Chalmers included lowering the machine 2 feet and fitting it with Bonneville racing tires engineered for 300 mph, Archer said. The engine used was the original six-cylinder Buda tractor engine, although the engineers who designed it likely would have trouble recognizing it.

“It was fairly common in trucks and heavy road equipment back in the day,” Archer said. “But it was extensively modified to go up to 6,500 rpm, about double what’s normal. It’ll scream.”

The tractor body was altered somewhat, but rules don’t allow an enclosure for the driver except a metal roll cage for safety.

“We didn’t know how the aerodynamics would work, but it came out pretty good,” he said.

The final touch was attaching a “slow moving vehicle” sign in the rear of the vehicle, typical for rural tractors, just above the pod where the deceleration chute deploys.

Incredibly, they weren’t able to give the tractor a full test run before the Blytheville competition.

“There were a lot of unknowns,” Schalitz said. “We hadn’t tried to compete for this before, and there are not a lot of flat places around Marietta. On paper, the calculations, everything made sense, but to say I was a little nervous would be understatement.”

The rules require two test runs, she said, which proved to be helpful because she could gauge track distance and how the tractor handled at speed.

“We have a data logger on tractor that records temperatures, RPMs, that sort of thing, and we checked it out, everything was running the way it was supposed to,” she said. “We went back to starting line and just put it all out there.”

Archer confessed to being a bit nervous.

“It was a pretty big experiment, but we hit enough good things right,” he said. “It went like a rocket. Some of my farmer buddies still don’t believe it.”

The tractor has only one gear in the transmission — high — so rules allow a running start with a push vehicle.

“We used a Jeep to push it up to about 40 mph, then it started pulling away from us,” Archer said.

The track is a closed runway that was part of Eakin Air Force Base, named for a World War II and Cold War general and once home to a squadron of B-52s. Closed in 1992, the 11,600-foot runway was perfect for record runs by fast machines.

The meet was organized by the East Coast Timing Association, which keeps official speed records for vehicles ranging from motorcycles and cars to trucks and, well, tractors.

Schalitz let it go and began slowing down after the one-mile mark, where the speed that matters for the record book is clocked.

“I saw dad and the crew coming down to meet me, their hands in the air, and they all seemed very excited,” she said. “I made 106.6 mph on that pass.”

“We were very happy, we achieved what we wanted to do,” she said. “We went back to the trailer, took a break, looked at the data, we were looking at each other saying, ‘We got the record.’ It was really good, we were happy, but then we started talking — why not try to break that record, set it out there a little bit further?”

They headed out for a second run.

This was not like riding in a car, Schalitz said.

“It’s open with a roll bar, so the driver is very exposed to that wind. As I got closer to 100 mph, the wind was definitely a factor, it pushes you back in the seat,” she said. “It’s very noisy, the engine is right there. It was a little bit uncomfortable because I’d never done before. It’s a ride I’ll never forget.”

Archer said Schalitz is his youngest child and the one who inherited the family mechanical aptitude. The Archer family owns Pioneer Group, an oilfield servicing firm.

“She’s always been competitive, from high school sports to pulling tractors,” he said. “She was rebuilding superchargers for guys when she was a teenager. She’s whipped about everybody in the country in tractor pulling. She can handle them with the best.”

At one time Archer and his daughter competed against each other in tractor pulling.

“She deserves a lot of credit,” he said. “What she did on that Allis Chalmers, you got to pucker up to do that.”