Photo by Jeff Baughan The pattern of the temperature blanket is called “Apache Tears” on Pinterest. The blanket measures 60 inches wide by 100 inches long. 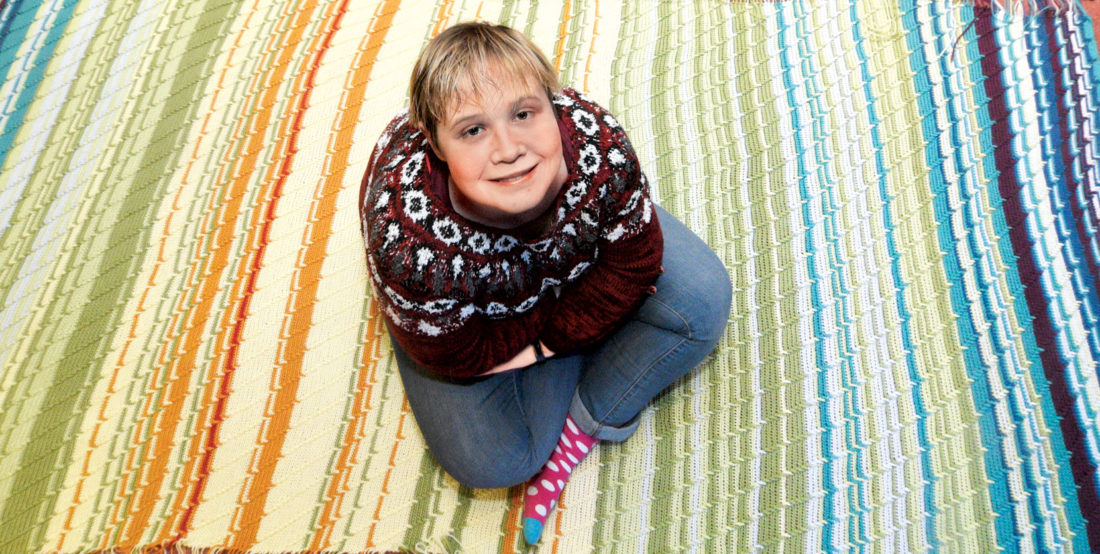 VIENNA — Late in 2015 Vienna resident Mary Katherine Augstkalns decided for 2016 she would crochet herself a weather blanket, a blanket where the color used for the row is based upon the temperature of the day.

“I had this, no problem, except I couldn’t crochet,” she said. “Yep, couldn’t do it before I started.”

So she started out with YouTube videos learning to crochet.

“Scratch that off the list,” she said. “It became a New Year’s resolution and then I started on the blanket.” 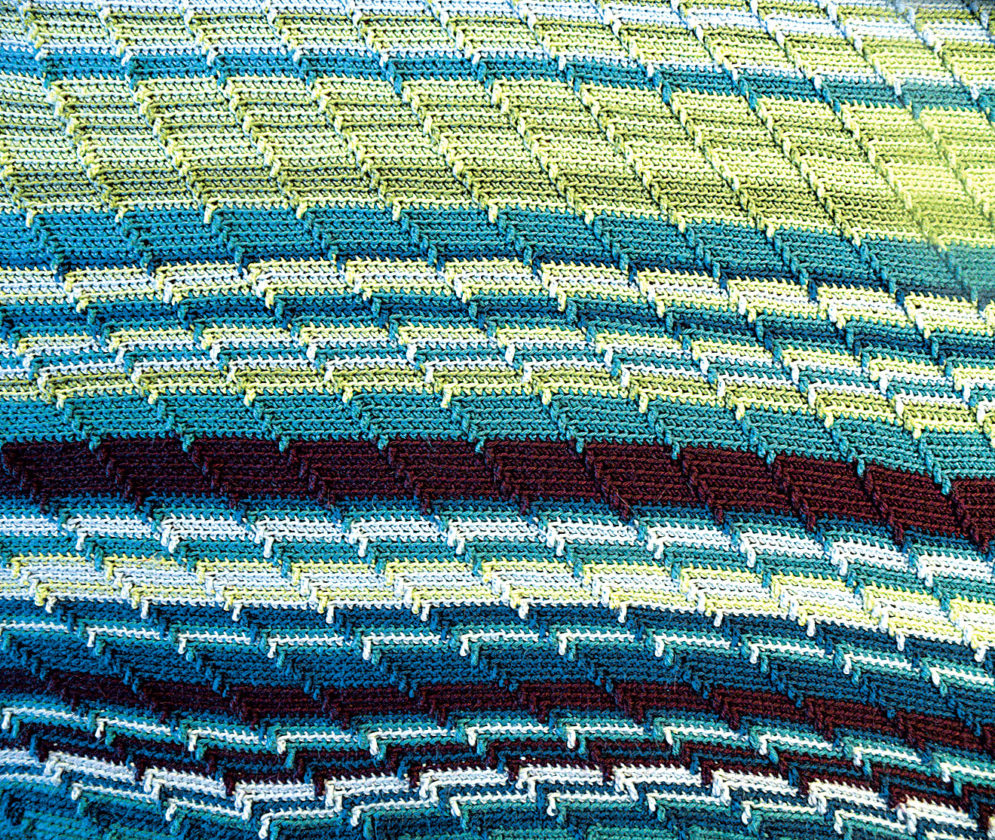 Photo by Jeff Baughan The pattern of the temperature blanket is called “Apache Tears” on Pinterest. The blanket measures 60 inches wide by 100 inches long.

“If you crocheted the day of the temperature, a row usually took about 40 minutes,” she said. “There’s about 240 hours devoted to the entire blanket, give or take a bit.”

Augstkalns recorded the temperature daily as there were days she couldn’t do the crocheting.

“I got behind about six weeks when my 14-year-old cat, Gummitch, died,” she said. “I had gotten him from the Humane Society when he was a kitten.”

Two young cats from the Humane Society, Phobos and Deimos, named after the two moons of Mars and characters in Greek mythology, have taken Gummitch’s place.

She decided to use the noon temperature daily to be the standard as to how she decided which color to use.

“It was the standard,” she said. “I used the temperature on my Weather Channel app on my phone. It wasn’t the heat index but the actual temperature. I got behind during vacation at Pawley’s Island because all the phone would show is the temperature where the phone was. It would have thrown off the colors had I used those so I used the Weather Underground website for Vienna’s temperature. So I had some catching up to do when I got home.”

Augstkalns said she took detailed notes on the temps of each day.

“Aug. 27 was the hottest day in Vienna at noon with 96 degrees and I used red yarn,” she said. “Jan. 18 was the coldest at 11 degrees and I used purple. That’s one of the fun things about this. The temperature is different everywhere. Because of that, it makes this type of project hard to duplicate. A degree here or there can change the color of yarn you use. Had I used the actual daily highs, there would have been a lot more red and purple yarn used.”

Yellow was the most common color used when the temperature was 76-85 degrees in late spring and early summer.

She used the following color and temperature combinations

The pattern is called “Apache Tears” where the crocheter does nine single crochet stitches before adding a double crochet stitch on the 10th and continues with nine more single stitches.

“The double crochet creates a rib moving across the blanket one space with each double stitch,” she said. “The Apache Tears was the shortest pattern I could find. The pattern Pinterest suggested was 22 feet in length. Ummm, no!”

OK. What is the difference between crocheting and knitting?

“Crocheting has a hook and you work on one active loop at a time. It’s not hard, you go loop through a  loop,” she said. “Knitting, you have two needles and many active loops, depending on what you are making.”

While Augstkalns says she has slept under the blanket numerous times, the majority of times it remains folded.

When it is unfolded and spread out, be assured Phobos will make an appearance, she said. It didn’t turn long for the black cat with a few white hairs in the middle of its throat to show up and flop on the blanket, thereby laying claim Augstkalns was going to have to share it.

While rubbing the cat’s back, she said, “I’m thinking of entering it in the ‘Women of Appalachia’ exhibit at the (Parkersburg) Art Center.”

Phobos, having had its itch scratched, departs. It doesn’t look back. “What a cat,” Augstkalns said.

“Anyway,” she said, “the exhibit is a collection of art by women in the region.”

The end of 2016 brought the finish of the blanket and some side effects Augstkalns didn’t know were coming.

“I have found I can’t just watch television anymore without crocheting,” she said. “It feels awkward and unproductive if I do.

“I think I can crochet about anything now,” she said with a note of confidence in her voice. “It feels weird to just look at it now and know it is finished.”

She paused, smiled a bit and said “I guess I’m just addicted to yarn.”