Lisa Barth walks into the office of Smith Rentals on Ellsworth Avenue on Friday. The operation, the first of its kind in Marietta when it was established by her father four decades ago, has 400 storage units. (Photo by Michael Kelly)

Construction is nearing completion on Storage Marietta, a new self-storage facility on Pike Street in Marietta’s east end. The self-storage rental complex is the latest of many in a growth business in the area. (Photo by Michael Kelly) 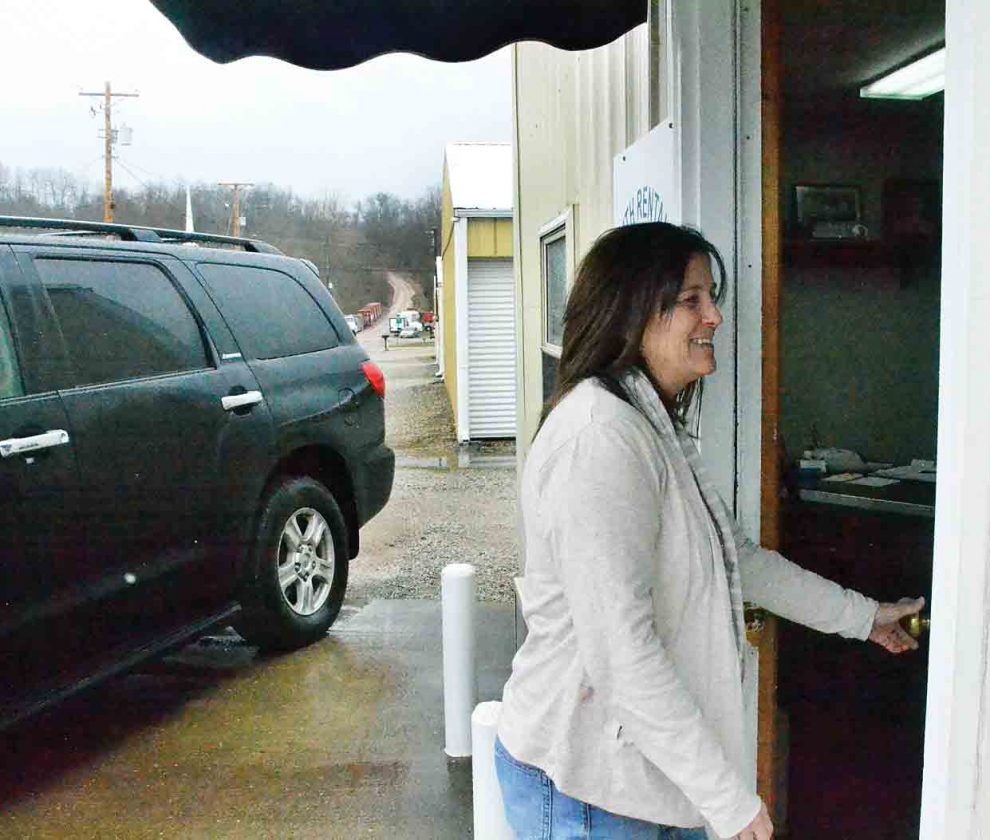 Lisa Barth walks into the office of Smith Rentals on Ellsworth Avenue on Friday. The operation, the first of its kind in Marietta when it was established by her father four decades ago, has 400 storage units. (Photo by Michael Kelly)

MARIETTA — Marietta has more stuff than it has places to put it.

The self-storage business is expanding, with Byers self-storage in Reno increasing its space by 50 percent and RPG Properties hoping to open a new, climate-controlled storage complex on Pike Street this spring.

Bob Byers, owner of Byers Rentals, said he is adding 84 compartments to his 175-unit complex in Reno.

“The economy is still good, people are buying houses, moving in and moving out and they need someplace to store their goods,” he said. “A lot of times, we see people downsizing. Also, there are college students, sometimes they go together and store their stuff rather than moving it back and forth.”

Byers said his average rental is six to 12 months, although until recently he had one customer who’d rented a storage unit for 20 years. His facility is nearly always full. 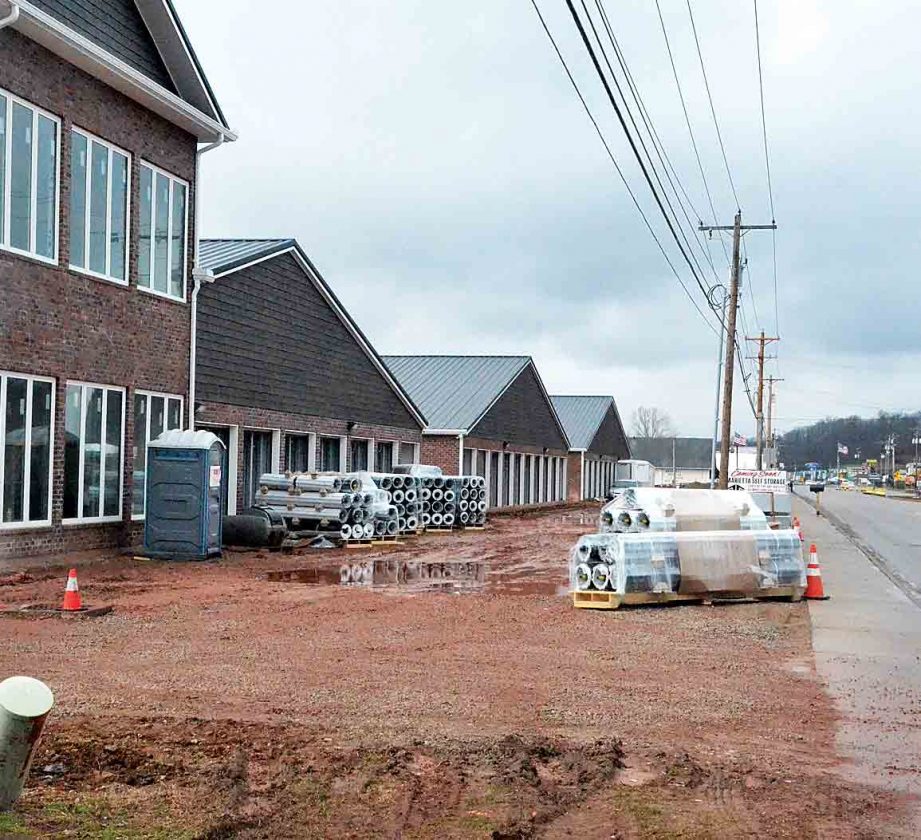 Construction is nearing completion on Storage Marietta, a new self-storage facility on Pike Street in Marietta’s east end. The self-storage rental complex is the latest of many in a growth business in the area. (Photo by Michael Kelly)

“I normally have a waiting list. Sometimes people will use a unit that’s a different size than they initially wanted until I get something free,” he said.

Byers said he originally got into the business to develop an alternate source of revenue when he owned convenience stores in Reno, Newport and Marietta.

“I always wanted to diversify, and I had the land,” he said. “It doesn’t take a lot of maintenance or employees, once the investment is there, with the property and structure, it’s pretty much maintenance-free.”

Snowbirds — people who move south for the winter — also are part of the business, he said, along with members of the military and businesses that need temporary storage for inventory or equipment.

“I’ve got one customer who moved to Florida but hasn’t found a place yet, renting six units,” Byers said.

The self-storage business, according to the online publication sparefoot.com, is massive. For every person in the U.S. there is 5.4 square feet of rental storage space.

The annual industry revenue in 2018 was $38 billion, there are upwards of 40,000 facilities in the country, used by about one in every 10 people in the country. There are dozens of the businesses within a 50-mile radius of Marietta.

One of them is owned by Lynn and Christine Weppler.

“We started it about three years ago, we were getting ready to retire and had a small piece of wooded property,” Lynn said. “My wife said it would be a good place for a storage complex, so we cleared it off, built 56 units.”

It was a good call, he said.

“We’ve been fortunate, basically I would say we’ve had three or four units empty for maybe a month, but we take a lot of calls, and lots of times we don’t have space, we’ll put them on a waiting list,” he said.

Their customers vary, he said.

“I’ve had several young men from the military who deployed and wanted someplace to put their stuff while they’re gone, others who have served and gone out — the military will move your belongings,” he said.

The downsizing phenomenon as the county’s population ages is another factor in the demand for storage.

“You talk about that, my wife and I are the people you’re talking about,” Weppler said with a laugh. “We lived in a 5,400-square-foot house, our kids grew up and went off to college, we downsized — what a job that is. We didn’t move our stuff into a storage unit, we had a large building on our property. We deal with a lot of people downsizing, going south for the winter months and they have a condo or an apartment here for the summer. They want to store their stuff, but a lot of the time they eventually get rid of it.”

Blue Knob Storage, the Weppler’s complex, is on Blue Knob Road and has 56 units. Weppler said the investment was not onerous — metal structures on a concrete slab, with security cameras and concrete drive-up. The business keeps them occupied, he said.

“It does take up a lot of time, and most of that is chasing money,” he said. “We hear a lot of stories, and a lot of times they do catch up on the rent.”

“We get motorcycles, jet skis, old cars,” Weppler said. “People pull them out on the weekend and go for a ride.”

According to sparefoot.com, the average monthly cost per square foot for a storage unit was 92 cents in 2019, a decline from the peak of $1.07 per square foot in 2017. Costs vary depending on amenities — some offer gated security and climate-controlled units — and location, with nine of the top 10 most expensive markets in California, and several of the least expensive in Texas. In 2017, at the peak for rental costs, Ohio averaged 76 cents per square foot, about three-fourths of the national average, according to the sparefoot.com data.

The Times was unable to contact RPG Properties, the Racine company building the new Pike Street facility. The company also owns self-storage complexes in Portland, and in Parkersburg and Mason, W.Va.

Homer Smith was, in Marietta at least, the first in the business, his daughter Lisa Barth said. Smith Rentals is on Ellsworth Avenue on the east side, a short distance from RPG’s new complex, with 400 units.

“Dad started it almost 40 years ago,” Barth said. “We had the local grocery, Evergreen IGA. Dad took a trip up the East Coast and saw all those ranch houses going up, with boats and campers, and he thought that was a trend coming our way, and that people would need storage. He brought in a contractor to build self-storage units, and he had them all rented before he even got the doors on them.”

The grocery building in 2000 was purchased by Hadley Funeral Home, which was looking for a second location that would provide better access for people with disabilities than its main chapel at Fifth and Wooster streets. The Smith family kept the property behind it, where the storage units had been built, along with an apartment complex and rental houses.

Barth said she and her brother Kent Smith run the rental operation now.

People seeking their services include those in one sort of transition or another.

“We have some people with job transfers or career changes, families with elderly parents, and we rent to businesses who need extra for items or for paper records,” Barth said. “It’s a nice variety of customers. We have storage for cars, boats and campers, and we’re pretty fortunate — we have 100 percent occupancy all of the time.”

She and her brother take turns minding the operation.

“We’ve kept it a family business. We always answer the phone,” she said.

A Glance at the Self-storage Business

*Percentage of households that rent a self-storage unit: 9.4 percent