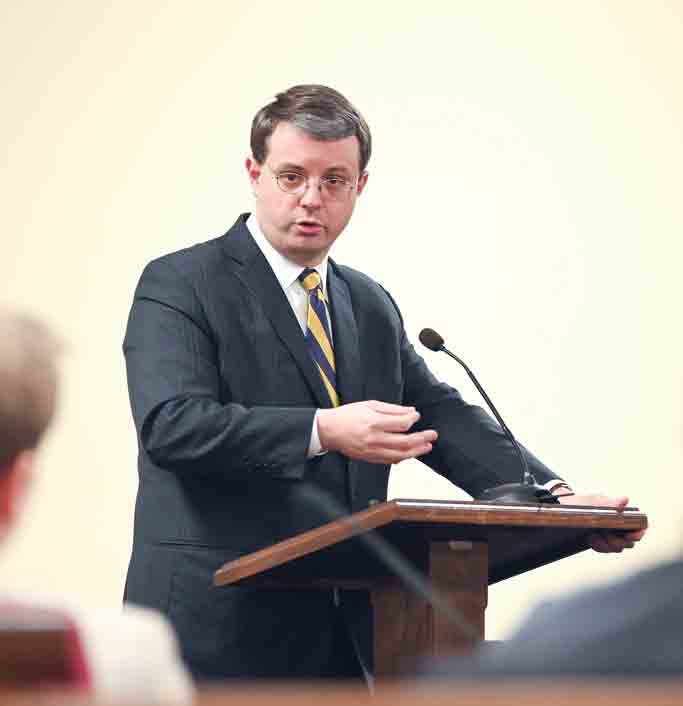 CHARLESTON — A new investment fund proposed by the speaker of the House of Delegates could provide a vehicle for multi-million-dollar investment in major manufacturing and industry projects in West Virginia.

Members of the House Finance Committee got their first look at House Bill 4001 on Wednesday. It will be on second reading and amendment stage Monday and up for passage Tuesday.

House Speaker Roger Hanshaw, R-Clay, believes the West Virginia Impact Fund can help bring in millions of dollars in private investment to the state for the large projects that have often been talked about, but have yet to see fruition.

Projects such as the $84 billion China Energy memorandum of understanding, the Appalachian Storage Hub or natural gas crackers require hundreds of millions of dollars of investment. Hanshaw said the proposed fund would help West Virginia compete with other states, such as Ohio and Pennsylvania, in attracting major projects.

“This is a vehicle to provide significant monumental-scale investment here in our state to allow us to compete with neighboring states in a free market way,” Hanshaw said. “We’re being shoved and we’re being shut out of those opportunities now because we’re in an economic situation that doesn’t allow us to do what other states are doing.”

HB 4001 would create the West Virginia Impact Fund and the Mountaineer Impact Office. The special revenue fund under the State Treasurer would become a source for investments.

The bill sets the minimum aggregate investment for the fund at $25 million. It would hold any returns on investment, gifts, contributions and even appropriations as determined by the governor and the Legislature, though it’s not expected that state monies would be used in the fund.

The Investment Committee would consist of the governor, the secretary of the Department of Commerce, and five members appointed by the governor with the advice and consent of the Senate. The speaker of the House and the president of the Senate would also serve on the committee as non-voting members.

The day-to-day management of the fund would be done by the Mountaineer Impact Office. The Investment Committee would appoint a managing director for the office. The director’s job would be to find investors. Much like a state-version of the TV show “Shark Tank,” the director would need to convince these sharks to invest their money in major state economic development projects.

“At this time it is not anticipated that the state will appropriate any money for investment,” said House counsel Mark McOwen.

“This is a not a committee that sits every day, but they need full time help … the linch pin of their help would be the managing director,” McOwen said. “The Mountaineer Impact Office under the managing director would be the one that would go out and try to find the investments; work with professionals, consultants, and others to find the investments; and find investors who may wish to partner with West Virginia in major investments in the state that could benefit the state.”

According to Hanshaw, 16 states have created something similar to what is being proposed in HB 4001, though the West Virginia Impact Fund would focus exclusively on private investment.

“In every other example they’ve … taken their own tax dollars and capitalized these funds for purposes of doing these kinds of economic development projects,” Hanshaw said. “Many people, including many people in this room – myself included by the way – believe that to be not a good idea. That is the kind of economic distortion that I think we’re actually trying to combat by this bill. But we’re going to combat it with a private market capitalist solution as opposed to using tax dollars to combat it.”

Hanshaw also compared the West Virginia Impact Fund to the Norwegian Sovereign Wealth Fund. According to Reuters, the Norwegian fund grew to $1.09 trillion in October. The fund was started in 1996 and has since grown to three times that of Norway’s GDP.

An area of concern for some lawmakers was how the West Virginia Impact Fund would be affected by federal laws governing how foreign countries and companies invest in domestic funds.

The issue came to light after the China Energy Memorandum of Understanding signed by the state. Gov. Jim Justice and former Commerce Secretary Woody Thrasher announced at the end of 2017 that the state had entered into an agreement with China Energy valued at $83.7 billion. China Energy committed to investments in Marcellus Shale natural gas production, infrastructure and downstream industries, such as chemical manufacturing interests.

The deal was part of a $250 billion trade deal negotiated between China and the U.S. Department of Commerce, with Thrasher traveling to China twice to secure the memorandum with China Energy officials.

That memorandum has never come to fruition, with state officials reluctant to even talk about it

“I’ve not seen it. I’ve never seen a copy of it,” Hanshaw said. “I assume that it still exists. I have no reason to believe it does not.”

“I’ve heard of it. I’ve never seen it,” said Dave Hardy, secretary of the Department of Revenue, during questioning Wednesday.

Hardy, who was in China in June, was asked whether any of the conversations revolved around the China Energy memorandum.

“Very little,” Hardy said. “Most of the conversation was about what it would take to get China Energy and other very good companies to come to West Virginia, how interested they were in our state, and we were told by the development office that they’ve been over here numerous times looking at locations.”

While experts believe the trade war between President Donald Trump and China played a role in the delay in investment, some also point to the Committee on Foreign Investment in the United States. Chaired by Trump, the committee monitors foreign investments in the U.S. for risks to national security.

According to the Congressional Research Service, Trump approved new rules regarding foreign investment national security reviews by the committee. In. 2017, Trump blocked the acquisition of Lattice Semiconductor Corp. by a Chinese investment firm.

“I understand that those who are engaged in investment strategies that may involve those from other countries will always as a matter of due course submit these investments to (the committee) for their approval or objection before they go forth with their investments,” McOwen said. “This committee would be well aware of that and expected to engage in similar behavior.”

Hanshaw said the West Virginia Impact Fund would allow foreign countries or business entities to invest by separating ownership from control, similar to how trusts operate.

“One of the reasons why this bill is important and one of the benefits that it offers that we do not have in our portfolio of things we can offer now is the ability to say to an entity that would like to domicile capital in the United States from an offshore location that you can place your capital here without the specter of CFIUS hanging over you such that your transaction may be unwound up to two years after the fact,” Hanshaw said.

For Hanshaw, the West Virginia Impact Fund is a way to compete with more money and incentives to recruit major manufacturing projects while not putting the taxpayers at risk.

“It’s a way to provide sort of a free market-based solution to something that some would assert is a free market problem,” Hanshaw said. “It’s nothing more than that.”