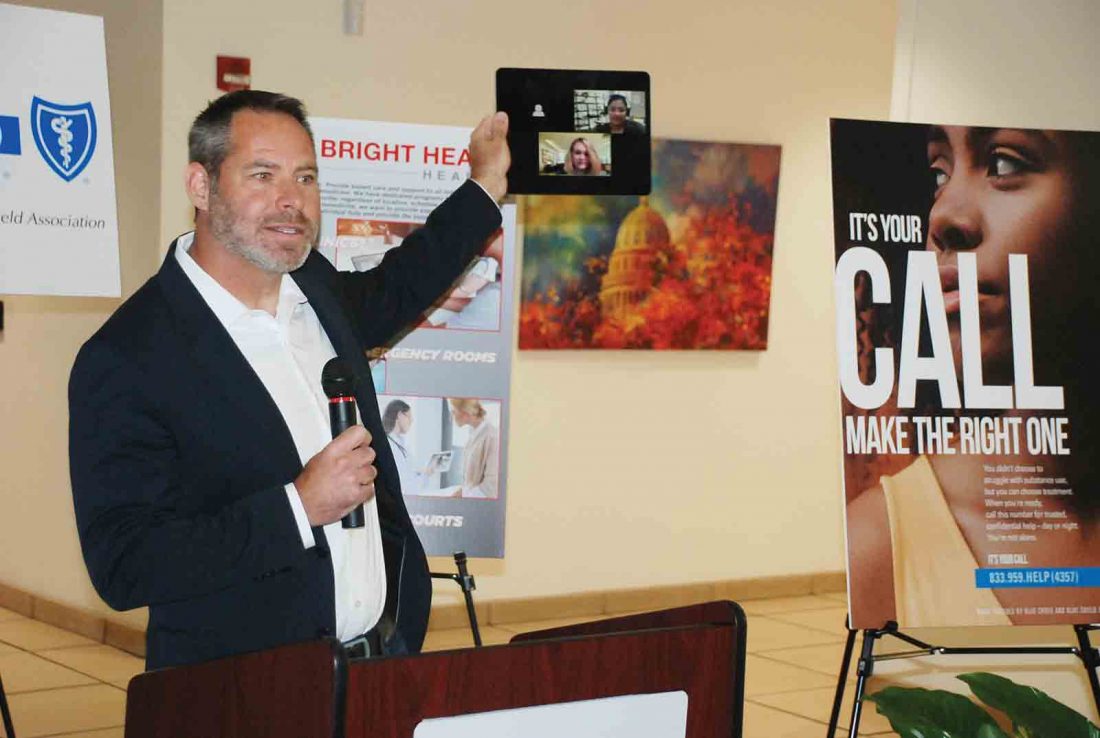 Bright Heart Health CEO Jon Ciampi demonstrates how the company’s telemedicine services can be accessed via tablet during an announcement of a Highmark West Virginia opioid use disorder program in partnership with the company Thursday at Highmark’s Parkersburg headquarters. (Photo by Evan Bevins)

PARKERSBURG — A technology-based initiative announced Thursday by Highmark West Virginia aims to provide treatment support and services for members seeking to overcome opioid and other addictions regardless of obstacles posed by time, money or location.

“We need to have people in treatment so we can save lives,” said Dr. Caesar DeLeo, vice president and executive medical director of strategic initiatives for Highmark.

“It’s all live, 24 hours a day, seven days a week,” said Jon Ciampi, chief executive officer of Bright Heart, during the announcement Thursday in the lobby of Highmark’s Market Street headquarters in Parkersburg.

To illustrate Bright Heart’s approach, Ciampi gave an example of a woman who grew up with an alcoholic father, was sexually abused by a family member, started using marijuana in college and became addicted to heroin. A treatment program dropped her because she was late for an appointment; another cost too much for her to join.

“So she’s been kicked out, stigmatized, told she’s not good enough, and now she’s back out on the street,” Ciampi said.

Bright Heart set her up with regular, telemedicine interactions five days a week, he said. If she misses an appointment, follow-up contact is attempted. Meanwhile, she was connected to a therapist to help her deal with her traumatic experiences, all the while recognizing that dredging up those memories could increase the risk of a relapse.

“We’re not treating people with simple issues,” Ciampi said. “It’s the idea of fitting a service around a patient.”

In a release issued by Highmark, DeLeo said medication-assisted treatment is “the gold standard of care for opioid use disorder,” but access can be limited.

Approximately eight of West Virginia’s 55 counties don’t have a health care provider licensed to prescribe such treatment. Nationwide, just 6 percent of providers have those credentials and “only half of them actually use it,” DeLeo said.

Transportation can be a hurdle to receiving treatment, as can having enough time to get to an appointment when working, Ciampi said. Even then, concern over being recognized, particularly in a small town, may make some people uncomfortable with going, he said.

“With telemedicine, I don’t have geographic boundaries that prevent me from getting care,” Ciampi said.

Bright Heart offers a virtual, walk-in clinic, which Ciampi demonstrated Thursday by logging in while speaking to company and local officials gathered in the lobby. He said the process is as private as possible, encrypted so the data does not remain on the device being used. Participants are encouraged to use earbuds so anyone nearby cannot overhear the other end of the conversation.

The goal is not to take the place of existing services but to supplement them, Ciampi said. If someone feels like they are ready to take the step toward treatment on a Friday night, they might waver before they can get into a physical office on Monday, he said.

Teaming with Highmark allows Bright Health to work with its network of providers, Ciampi said. They also have received a grant to work with drug courts around the state and hope to link up with law enforcement agencies as well, so officers can offer people in drug-related situations a chance to move in a new direction.

The partnership with Bright Heart fits with other recent initiatives announced by Highmark, including the introduction of the Substance Abuse Resource Center, an around-the-clock helpline (833-959-4357) available to people nationwide, regardless of their insurance status.

In January, Highmark announced a partnership with the nonprofit Shatterproof to provide a virtual education and advocacy program to promote recovery in the workplace and fight the stigma associated with opioid use disorder.

“This judgment, this stigma, this prejudice, this misinformation is oftentimes something that prevents people from seeking care,” DeLeo said.

The information is provided in five-minute installments that are released monthly, he said.