Higher tech training gets within reach

Dan Coley, president of HiVac in Marietta, gestures as he conducts a tour of the plant on Industry Road before the first quarterly gathering of the Appalachian Ohio Manufacturers Coalition Tuesday afternoon. (Photo by Michael Kelly)

A networking session followed the first quarterly gathering of the Appalachian Ohio Manufacturers Coalition on Tuesday night at the Marietta Country Club. About 100 people attended the event, which included Lt. Gov. Jon Husted as one of the speakers. (Photo by Michael Kelly) 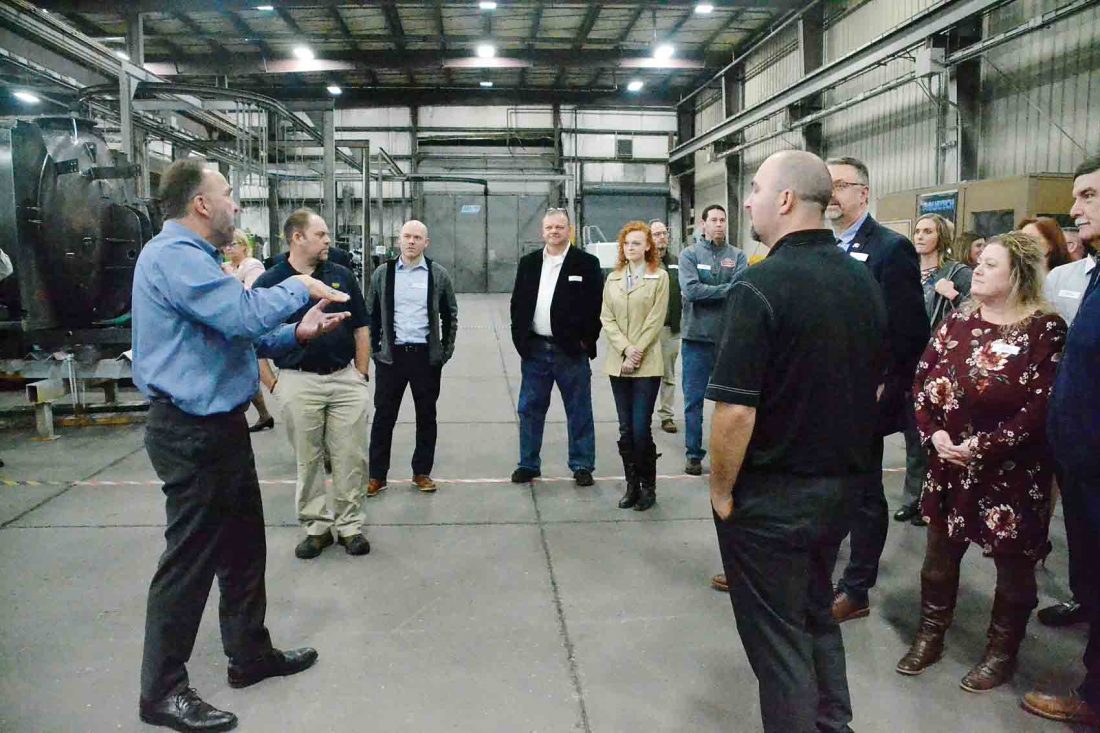 Dan Coley, president of HiVac in Marietta, gestures as he conducts a tour of the plant on Industry Road before the first quarterly gathering of the Appalachian Ohio Manufacturers Coalition Tuesday afternoon. (Photo by Michael Kelly)

MARIETTA — More than a year after it was set up, the conditions that gave rise to the Appalachian Ohio Manufacturers Coalition remain: The challenges of establishing partnerships with education and other agencies to develop workforce resources.

The coalition held its first quarterly gathering Tuesday night, starting out with a tour of the HiVac plant on Industry Road, led by company president Dan Coley.

“We can’t grow without other businesses, our partners,” Coley said. HiVac customizes heavy vehicles by fitting them with vacuum tanks and other equipment, primarily used in maintaining and repairing sewage systems. He indicated one cab-over Volvo chassis, bare and waiting for equipment to be installed.

“That one’s going to Australia,” he said.

Like his fellow industrialists, Coley is immensely concerned about bringing skilled talent into his plant. 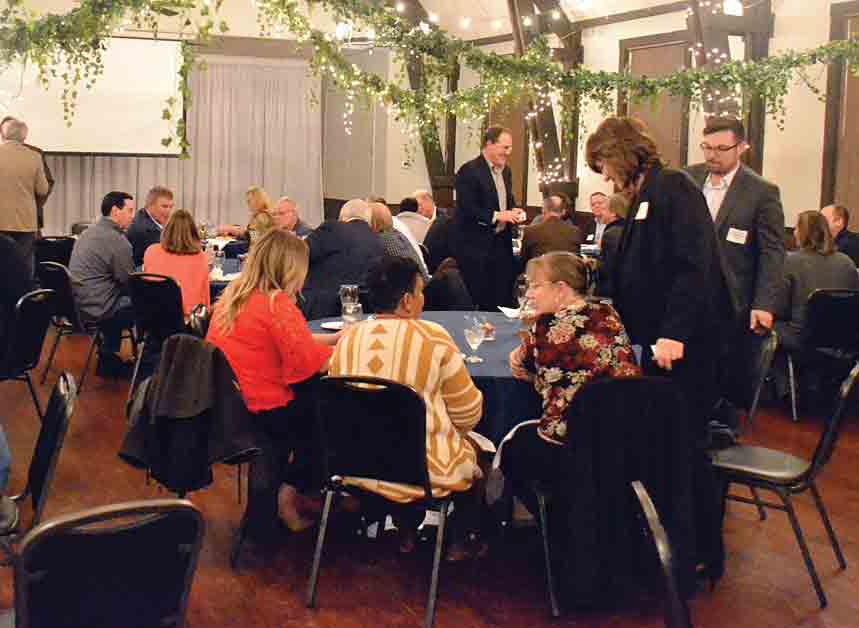 A networking session followed the first quarterly gathering of the Appalachian Ohio Manufacturers Coalition on Tuesday night at the Marietta Country Club. About 100 people attended the event, which included Lt. Gov. Jon Husted as one of the speakers. (Photo by Michael Kelly)

“The earning potential for workers here is nearly unlimited. We’ve got partnerships with Caterpillar, Komatsu … let your students know that we partner with them,” Coley said to a number of educators among the three dozen people touring the plant.

Lt. Gov. Jon Husted also was in the tour group, attending the coalition meeting after having launched a new digital utility at the Bureau of Motor Vehicles office in Marietta. A new app will allow BMV customers to secure a spot in line using their phones, then just show up at the designated time, greatly shortening waiting times for people who need services ranging from renewing drivers licenses to applying for a state identification card.

Husted used that as an example in talking about the way technology has become involved in daily life of Ohioans and in their work as well.

Speaking to the group at HiVac, Husted said the nature of training support from the state is changing.

“The skills of employees need to change,” he said. “We’re now going from training the unskilled to a training up-skill.”

In visiting vocational training institutes, he said, “it’s frustrating to see full classes for $12 an hour jobs” while classes for the high-tech skills, such as programming robotic manufacturing machinery, are sparsely subscribed.

Husted noted later at a dinner attended by about 100 people that industry needs to prepare for dramatic demographic shifts in the state.

“By 2030, there will be more people over 65 than under 18, and more people in the 64-69 age group than there will be in the 24-29 age group,” he said. With the number of people in prime working age shrinking as a proportion of the population, “we need to do everything we can to make everyone a positive contributor,” he said. “The opportunities now are as golden as they can be to bring people along.”

Bernie Anderson, president of Miba Bearings in McConnelsville and a founding member of the coalition, said the group is well underway as a nonprofit influence, with secured business and education partnerships, and positioned to acquire state and federal grants for training.

It’s training that is needed, he said.

“We need higher and higher levels of technology, and we need an educated workforce to manage those robotics,” he said. And the pool of available skilled workers is shrinking.

“It’s not going to be just one-off solutions, they’ll have a larger voice, influencing policy, and we can aspire to greater federal funding,” he said. “It’s going to be transformative for this region.”

Michael Kelly can be reached at mkelly@mariettatimes.com