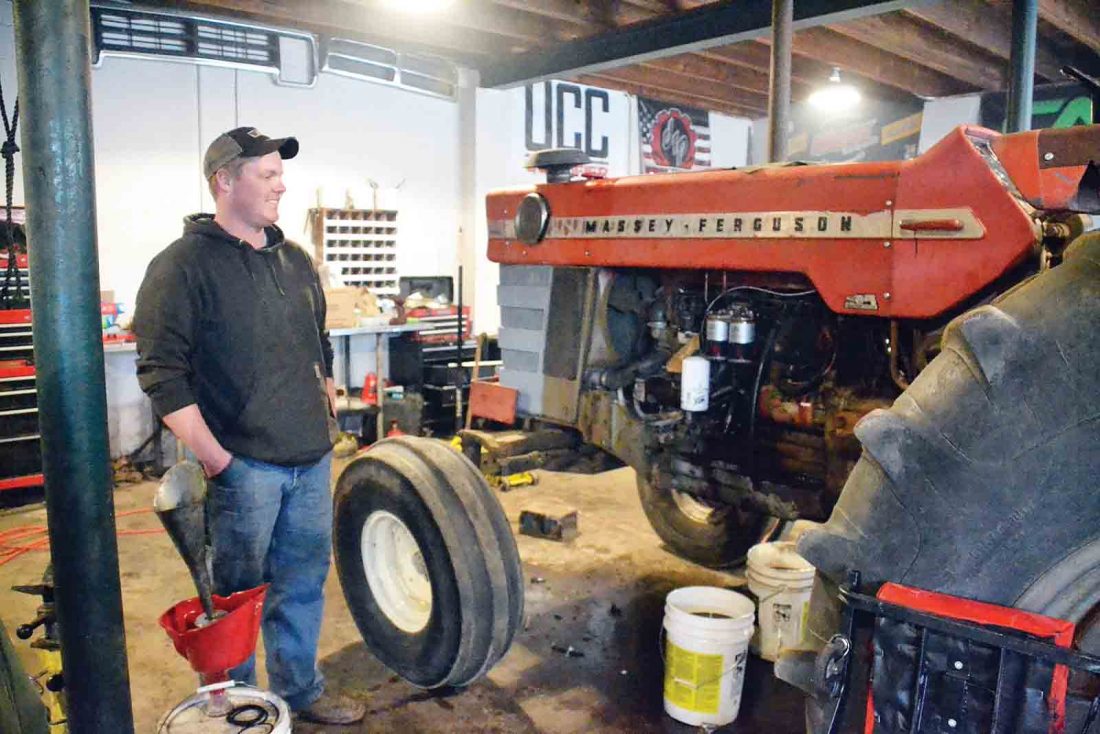 Tyler Stacy waits for fluid to drain while changing filters on a decades-old Massey Ferguson tractor at Stacy Family Farm east of Marietta on Friday afternoon. The Stacy farm is among nearly a score that welcome assistance from crop analyst Marty Clark to help determine their planting plans. Farms during the winter typically do equipment maintenance and planning for the next growing season. (Photo by Michael Kelly)

MARIETTA — Winter for farmers is a time for reflection and planning, and one important element in both of those is determining what was successful and what wasn’t in the previous growing season.

It’s a busy time of the year for Marty Clark.

“It’s an enterprise analysis, what it costs to raise every crop or commodity,” he said. “It gives them the big picture, how they did financially, what was profitable, the dollars-in, dollars-out.”

Farming is a complex business and the results come as a long-term landscape, not day-to-day and week-to-week income and expenses. The big picture involves expanses of data and analysis over a growing season and a year.

Clark said he is neither an accountant or a financial advisor, but he can crunch numbers for farmers so they can create a general taxation concept and determine what worked and what didn’t, in a financial sense, on the farm.

“We gather all the data on the site and compile it into a database, so it’s something the farmer can look at and compare to the averages,” Clark said. “It’s an analysis so they can see what they do well and where they can improve.”

Clark visits the farms individually to gather the data and provide a custom analysis.

“I spent two days last week out in the field, compiling data,” he said on Friday. The collected data is analyzed for each farm, and then Clark summarizes it for a gathering — the AgriBusiness Planning and Analysis Banquet — held in early-to-mid-April.

The data serves many purposes, he said, but the primarily usefulness for farmers is in tax preparation and crop planning for the coming season.

“It helps them plan for the coming year, so we need to get it to them before April. It’s a lot of preparation for them, determining their yields and costs, it’s extra work but if you really want to know, you’ve got to do it,” he said.

The program has been around for decades, he said, and was started by his predecessor in agribusiness instruction at the career center, Doug Mercer. Clark has been doing the work for about 20 years.

Bill Stacy of Stacy Family Farm in Reno said his farm is a long-time participant in the program.

“My father was involved in it, and I am, too, and so is my son, so that’s three generations. We’ve got a long track record, and I really agree with it,” Stacy said. “I started my son with this when he was in FFA, made him run an analysis on his sweet corn project.”

The analysis is what every business has to do, he said.

“We’re no different from anyone else up and down State Route 7, it’s taken to the same degree of detail as Solvay or any of them. In the long term, you’re looking at what you’re doing now, looking back, seeing if the farm could support another family member,” he said. “You’ve got to be able to provide for another person at the table, so to speak, and to do that you need to know the records.”

Examining the analysis can be a thought-provoking experience, he said.

“You take in those numbers, and you ride around on the tractor seat for a couple of days to let it sink in,” he said.

Clark said it’s too early in the process to make firm statements about the condition of farming for 2019, but overall he’s optimistic.

“The economic situation seemed to be improving. Soybean yield was good, depending on where you are in the county. I think we’re really blessed compared to other parts of Ohio,” he said. “Dairy has been really difficult and some farms don’t even do it anymore, but I think it’s headed in a better direction. But I’m pretty careful about making open statements. I farmed myself for many years.”