A mechanical elf holds a cup of hot chocolate in one of the window displays on Second Street at Peoples Bank. (Photo by Michael Kelly)

Elves, Santa, Christmas cards and sacks of mail from the North Pole are arrayed in one of the window displays at Peoples Bank. (Photo by Michael Kelly)

An elf waves from among sacks of mail from the North Pole in one of windows at Peoples Bank on Second Street. (Photo by Michael Kelly) 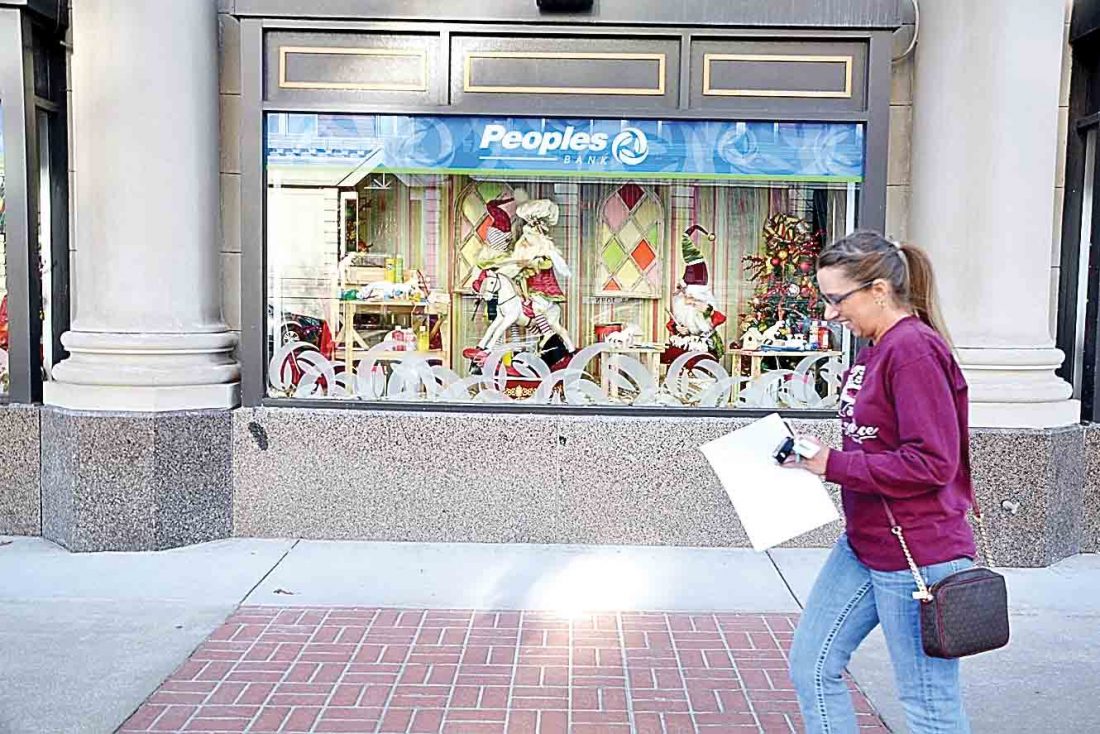 Finished a few days ago, the annual Christmas display is not only thematic but includes details that will draw passersby into the dioramas. It’s the 16th year that the Marietta bank has engaged Crown Florals of Parkersburg to create a spectacular visual display in the department-store style windows. The displays will run through early January.

“This year, the theme is ‘Preparing for Santa’s Big Day,'” Peoples Bank retail marketing specialist Callie Witkosky said. “It’s six vignettes of the things elves are doing behind the scenes.”

Each window has animatronic, happy and somewhat sly-looking elves doing things that range from stuffing mail sacks to painting a sleigh. The vignettes begin with the North Pole sleigh servicing department and end with a sleeping Santa in bed, his chest rising and falling under a comforter. 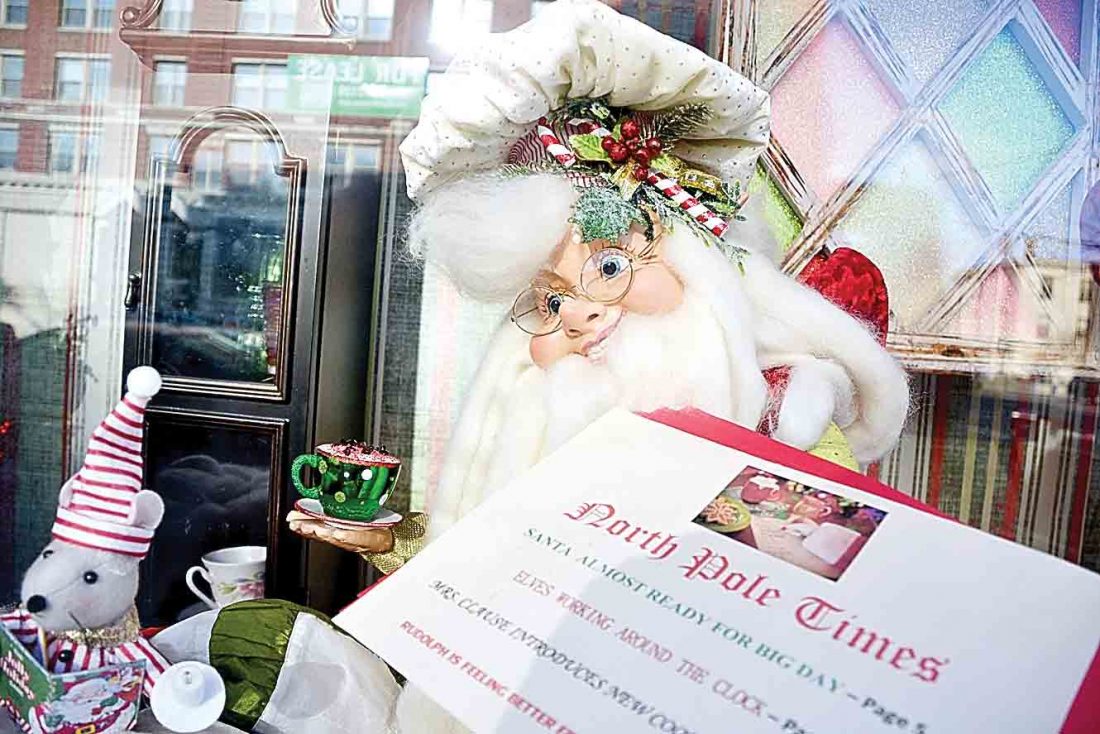 A mechanical elf holds a cup of hot chocolate in one of the window displays on Second Street at Peoples Bank. (Photo by Michael Kelly)

“It starts with Crown Florals, generating ideas,” Witkosky said. “They go to special markets. Keith (McClung) found these Swedish-looking elves and Facetimed us from the market so we could see them. He developed a vignette for each window.”

McClung said this year’s display was both rewarding and especially challenging.

“Sometimes the process is dictated by what we have in inventory, sometimes it’s a collection we’ve acquired,” he said. “This is the first time in the 16 years – it’s eight projects, we change them every two years – that the characters haven’t been vintage.”

The process of getting a new window display planned and completed can take from a year to a year and a half, he said.

“The bank is incredibly welcoming to our creative concepts,” he said. “We meet and run the storyboards by them.” 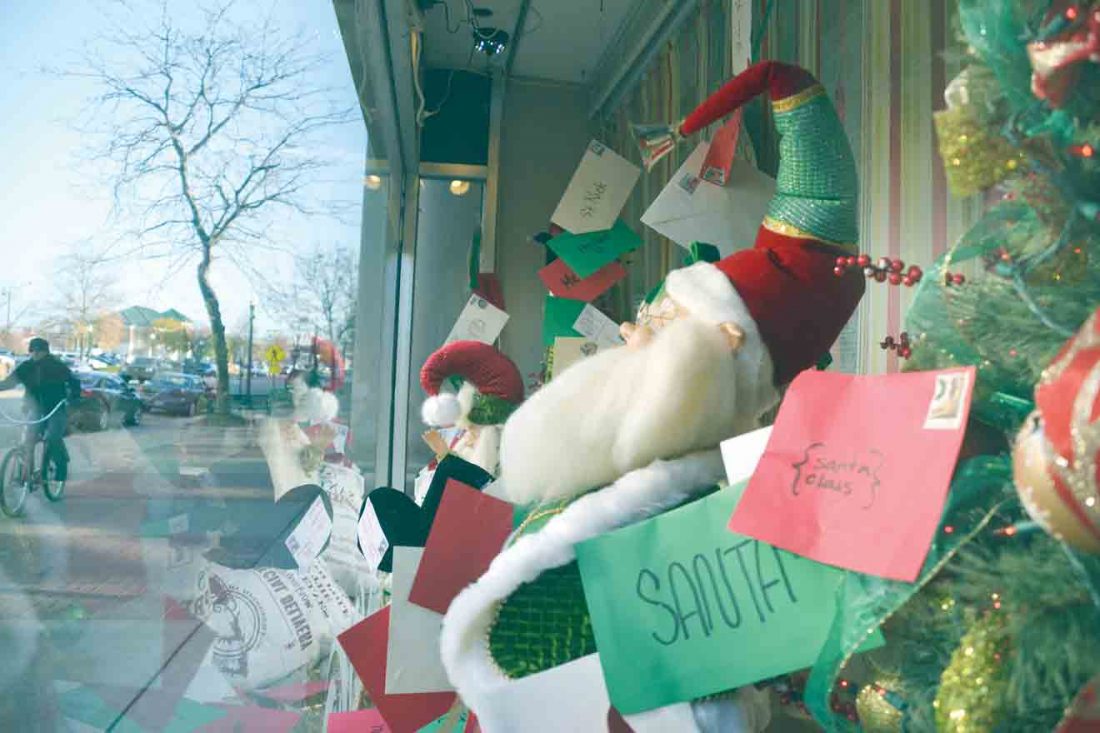 Elves, Santa, Christmas cards and sacks of mail from the North Pole are arrayed in one of the window displays at Peoples Bank. (Photo by Michael Kelly)

The elves they brought back from the market expedition, he said, were not animated, but his staff fixed that.

“The designers took some of our characters that weren’t in very good condition, stripped them down to the mechanics, took apart the elves and reconstructed them on the machinery,” he said. “It took about 400 hours. It was quite a process.”

With the characters, design concepts and materials, and the auxiliary bits and pieces in hand, Crown Florals then brings everything to the bank and goes to work on the installation.

“It was a two-day process,” said Peoples Bank senior vice president of marketing Kevin Eagan. “They install it window by window. Some of our staff have their workstation against the windows, and it’s done from the inside, so they were hopping over desks. It’s quite a production.”

McClung said people who stop to look carefully at the displays will uncover details that aren’t obvious to those who just walk by and glance at them. 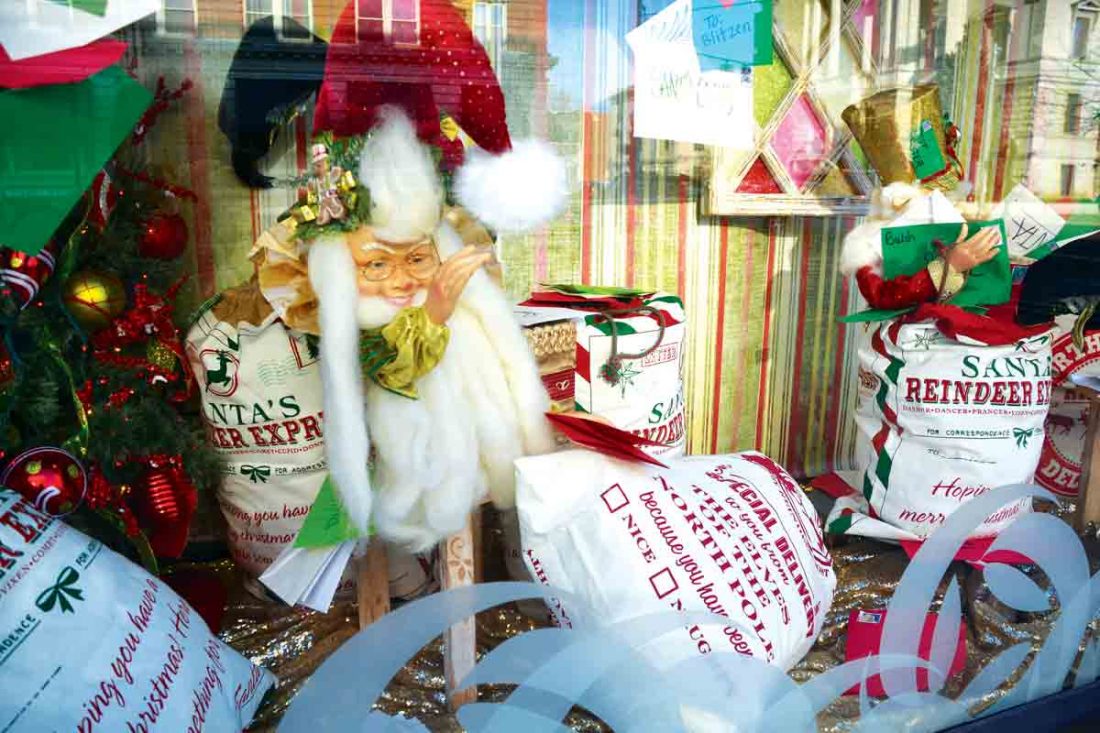 An elf waves from among sacks of mail from the North Pole in one of windows at Peoples Bank on Second Street. (Photo by Michael Kelly)

“If you look at the sleeping Santa, you’ll see a mouse on his belly, but there’s also a mouse door in the backdrop with a mouse peeking out of it,” he said.

In the same vignette, an elf is holding up a copy of the North Pole Times with an array of headlines that would be of interest to elves, reindeer and other residents of the holiday redoubt.

“People pick up on those things,” he said. “It’s a fun project, and we’re really honored to be able to do it.”

The bank has expanded its holiday reach this year, Eagan said, by installing vignettes of gingerbread people making peppermint candies in two windows of its insurance office facing Putnam Street.

Eagan said the bank’s goal each year is to have the display finished by Thanksgiving.

“Many local families have a tradition of coming by during Thanksgiving,” he said.

Witkosky said for the bank staff, it marks the start of the season.

“Absolutely, everybody gets in the spirit, and they take that spirit home with them,” she said.

Michael Kelly can be contacted at mkelly@mariettatimes.com