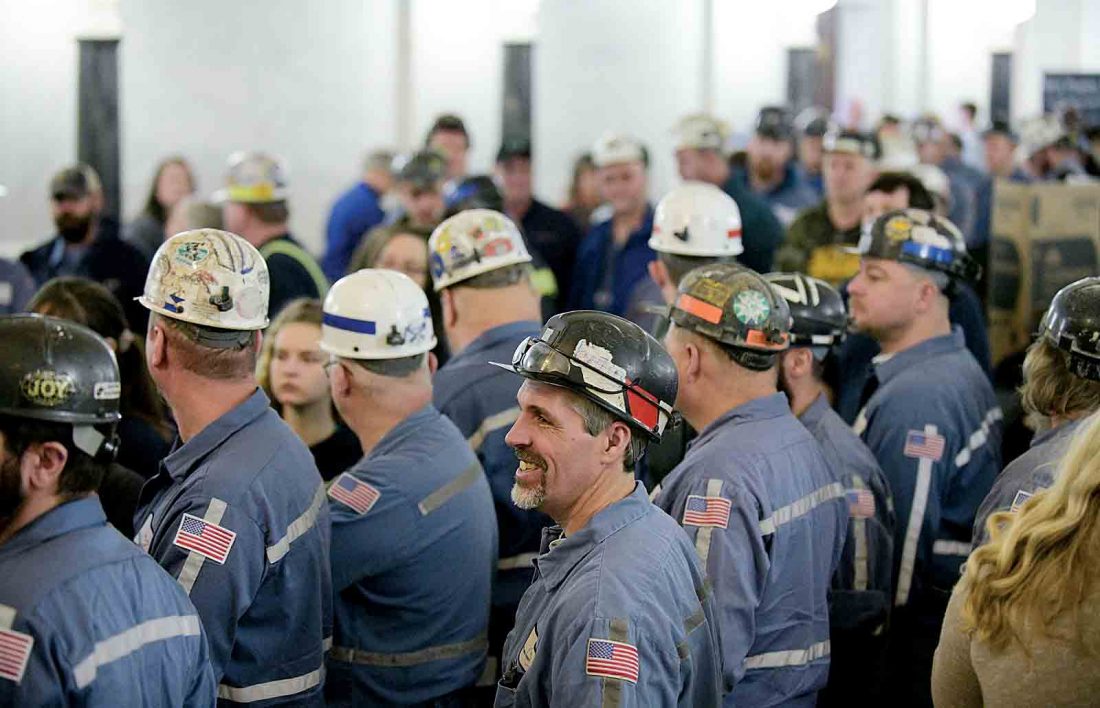 CHARLESTON — A bipartisan agreement has been reached on a bill to help shore up the pension plan for miners, West Virginia’s two U.S. senators announced Wednesday.

“It is really a good day because it’s a very unusual day in Washington when we have a bill that’s called a bipartisan bill,” Manchin said in a conference call Wednesday afternoon with reporters. “We’re moving in the right direction here.”

The Bipartisan American Miners Act provides funding for the United Mine Workers of America’s 1974 Pension Plan, which covers retirement benefits for 92,000 retired miners and health care benefits for 13,000 miners. It would fund existing obligations by using surplus monies from the Abandoned Mine Land Fund to fund pensions, as well as health care benefits for miners whose companies declared bankruptcy in 2018 and 2019, until the pension fund is fully funded.

“I’m just proud that everyone was able to step to the plate. We understand the urgency and the need,” Manchin said. “All we’re asking for is make sure they get the money that they paid into it. So that’s what this has done, and with that, we need to get this done as soon as possible to prevent anybody from losing their pensions or their health care.”

Speaking by phone Wednesday, Capito said she was happy to have the backing of McConnell for the Bipartisan American Miners Act, which likely means quick action by the Senate. Both Manchin and Capito have been working behind-the-scenes to bring McConnell on board.

“We’ve been really working the issue, but I’m really pleased that I was able to work with Senator McConnell — he has over 8,000 miners in Kentucky that are affected by this — and get him on this bill as a bipartisan bill,” Capito said. “Getting Sen. McConnell is critical, because we know he controls the schedule. He also controls what legislation comes forward. By him making a more aggressive move, I think it is a good indicator of where we might have better success.”

Several bills have been introduced over the years to address the issue with union pensions. Two bills — the American Miners Act and the Rehabilitation for Multi-employer Pensions Act — are sitting in the Senate with no action to date. Last month, Senate Democrats accused McConnell of sitting on the legislation.

In a statement Wednesday, McConnell said the government can no longer wait to help the miners. He blamed regulations put in place in former President Barack Obama’s administration for causing coal companies to shut down and creating the pension crisis. McConnell said he is talking with President Donald Trump about what more can be done to help miners.

“Unfortunately, eight years of regulatory assault on coal country can’t be undone overnight,” McConnell said. “The startling number of orphaned miners in the drastically underfunded pension plan presents an urgent crisis for entire communities of miners, retirees, and their families. To help our miners and their families, including those in Kentucky, Sens. Manchin, Capito, and I proudly introduced our bill today to help solve this looming pension crises.”

Capito said using the Abandoned Mine Lands Fund to fund the pensions will not affect the mission of the fund to return mines back to the way they were before.

“We figured out a way to also keep the environmental restoration moving forward, but to use some excess dollars there to pay for this,” Capito said. “And I think that’s another reason that this has some success besides the bipartisan nature of it.”

The plan is an offshoot of a 1946 agreement among the UMWA, coal companies and the U.S. government to provide miners with retirement benefits and health care. UMWA President Cecil Roberts expressed his gratitude for the Senate working together to help miners.

“With this one bill, the United States Senate has taken a giant, bipartisan step forward in keeping America’s promise to our coal miners and their families,” Roberts said. “It has taken us more than nine years to get to this point. Let us get this legislation passed as soon possible, and finally provide some peace of mind to these retired American heroes.”

The UMWA Pension Plan is estimated to go insolvent by 2022 and cause retired miners, widows and other beneficiaries to lose on average of $600 per month in pension benefits. The announcement Oct. 29 that Murray Energy, the largest union coal mine company in the U.S., was filing for bankruptcy raised concerns with lawmakers that the pension plan could go insolvent at a quicker pace.

A potential insolvency would also put pressure on the federal Pension Benefit Guaranty Corp., which takes over insolvent pension plans. Estimates by the Government Accounting Office put a 40 percent chance of the Pension Benefit going insolvent itself by 2024 due to the number of multi-employer pensions plans it manages.