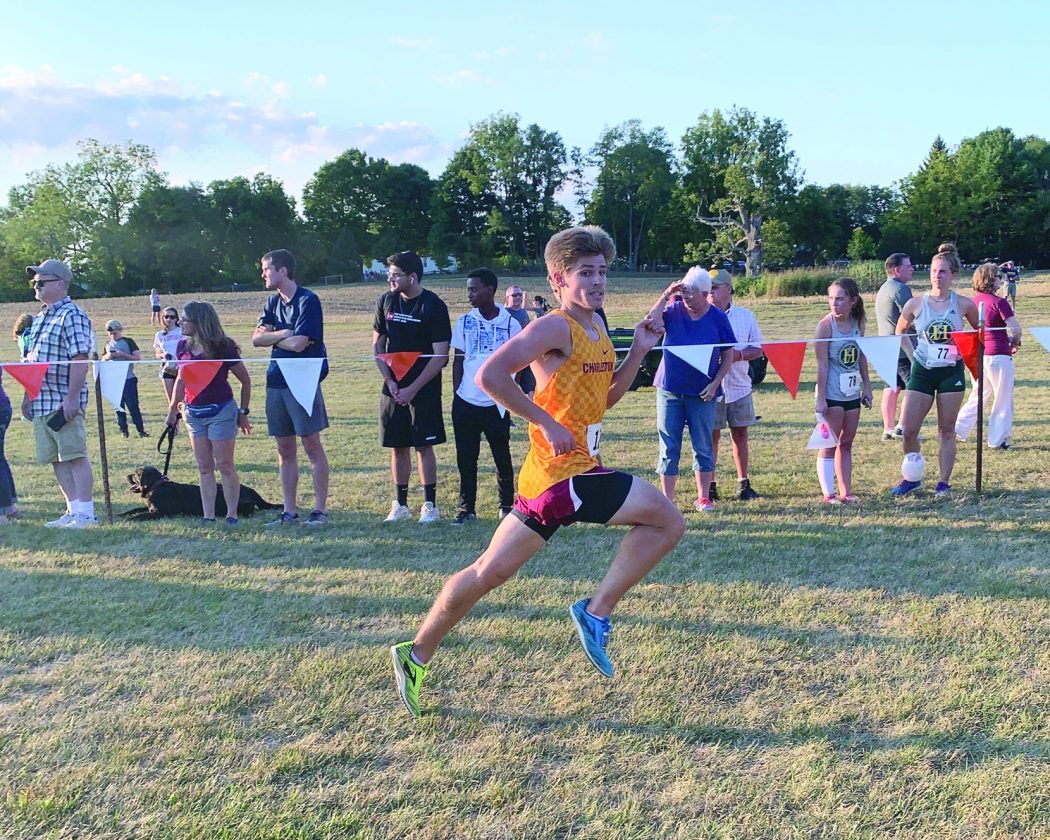 PARKERSBURG — Going with the flow has worked out quite well in more ways than one for University of Charleston runner Anthony Bradford.

In his first collegiate meet last September at Virginia Tech, Bradford was ninth on the team.

“We went to the next meet and I got eighth on the team and I just kept getting better and better and practices were going well for me,” Bradford added. “I moved up in groups and my third meet I ran a top 10 all-time time for my team. That was completely unexpected and I was about seven seconds back from our seventh guy.

“I was consistently behind him every race. I knew my season would basically be done except for a final meet for the JV runners. I kept running because we still had about three or four weeks until regional with conference inbetween that. I sat out conference (Mountain East), but I went as an alternate.”

After finishing as back-to-back MEC cross country champions, coach Bias asked Bradford to keep working as a possible alternate instead of focusing on the upcoming indoor track season.

As fate would have it, that was a good idea.

“Our guy was out running back from a workout and twisted his ankle on a curb,” Bradford explained. “He stepped wrong on the curb and we were up in Lock Haven (for the NCAA Division II Atlantic Regional) touring the course.

“They needed to know who our top seven would be. Me, him and coach we all thought it was best he rested it for nationals and I ended up running. I finished pretty decent.”

Although his teammate made it back for nationals after the Golden Eagles repeated as regional champions, Bradford still made the trip.

“I was an alternate for nationals and I didn’t run, but I went to Division II nationals in Sacramento,” he said.

“It was an awesome trip.

“I couldn’t complain about being brought to that. Actually, I have never traveled farther than that up until last year and my parents took me to San Diego in August.”

With his focus now turned to competing in the 800 and mile during indoor season, Bradford was ready to give his best again.

He was definitely “pleased to see all the hard work” pay off for cross country season, which he’d basically been training for from May through November.

All that time and effort paid off in more ways than one for Bradford, who is majoring in biology with a psychology minor and finished with a 3.9 GPA.

“Running at the regional qualified me,” he said of a chance to earn Division II Academic All-American status. “I had to be top 30% in the regional race and I also had to have a 3.25 GPA or better. Going into the season I just was going to run the meets and hand it off to the other guys whenever we came down to championship season.

“Whenever our guy went down, the night before regionals my coach came up to me and said you got a really good shot at Academic All-American. I said what. He just told me to run as hard as you can and I just kept that in my mind the whole race. It was definitely awesome and I knew I was in a position to step up and run at nationals if I needed to.”

Charleston only had one outdoor meet before the COVID-19 pandemic.

“It was our home meet and the weather was terrible,” said the Golden Eagle, who planned to focus on the steeple chase. “It was messed up from the start. It was snowing and 20 degrees. It was fun.”

What wasn’t fun was losing the rest of his spring season, but that too offered a sort of silver lining.

“I used both of my seasons. I used indoor and cross country, but they (NCAA) gifted us outdoor and I’ll have four outdoor track seasons left,” he added.

“I”m looking at grad schools and trying to see what would be best for me. I think having that extra year, especially as I develop, will probably be intriguing to some schools that I’m looking at.”

The student-athlete took 19 credit hours in the fall and 20 more in the spring.

Unfortunately, he missed a 4.0 GPA because of a ‘B’ in chemistry, which was a class he had to finish online after COVID.

“Going into college I didn’t know if I was going to play soccer or run track and everything just worked out,” Bradford added. “Coach Bias and I just clicked immediately.

“Going into the first season I didn’t have many expectations. I was just going to try and establish myself and everything just went surreal. Schooling went well, the team went well and I got a lot to look forward to coming back in the fall.”