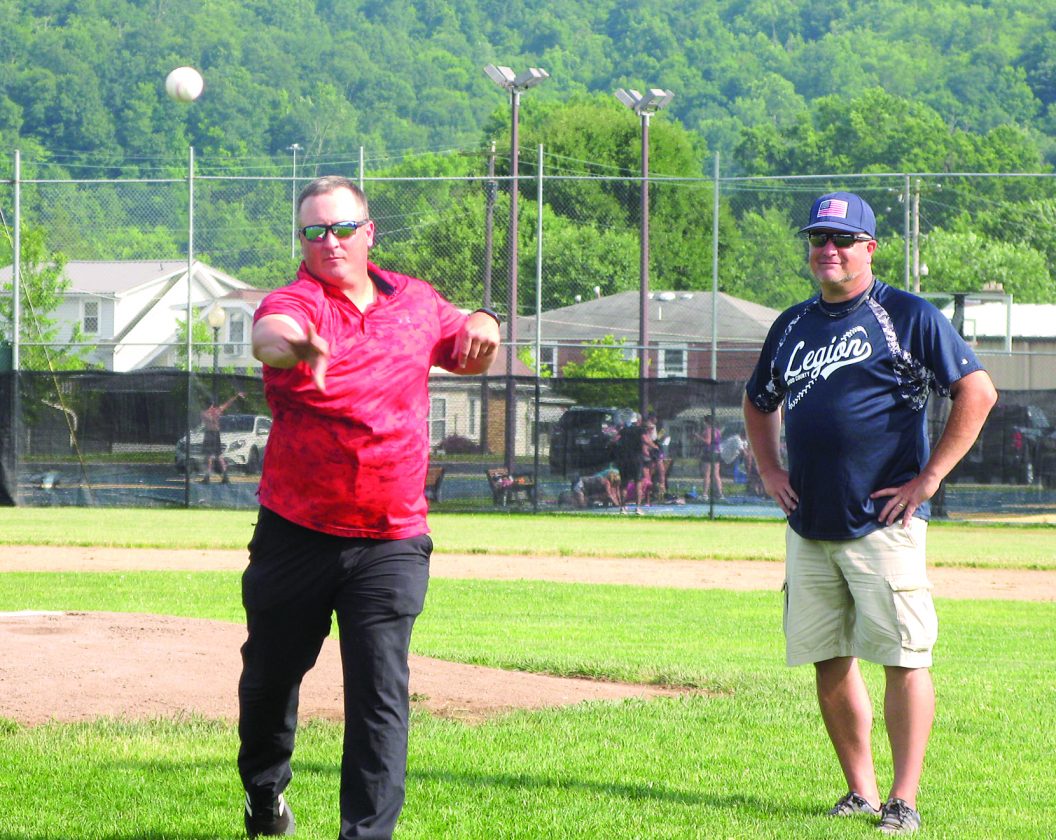 Photos by Jay W. Bennett Mike Allen, son of the late Larry Allen, delivers a strike during the ceremonial first pitch on Monday evening at Bennett Stump Field prior to Wood County Legion playing host to Cambridge in a doubleheader. WCL manager Mike Goodwin looks on.

Photos by Jay W. Bennett Mike Allen, son of the late Larry Allen, delivers a strike during the ceremonial first pitch on Monday evening at Bennett Stump Field prior to Wood County Legion playing host to Cambridge in a doubleheader. WCL manager Mike Goodwin looks on.

PARKERSBURG — Following a pair of twinbill sweeps to open the season, Wood County Legion and manager Mike Goodwin’s 4-0 start came to an end Monday night at City Park versus Cambridge.

Colin Bryant worked five innings of three-hit ball as the hosts led 4-3 after five in the opener. However, he couldn’t get out of the sixth and teammate Nathan Currey was unable to retire any of the six batters he faced as Cambridge’s seven-run inning proved to be the difference in the 10-5 affair.

“The sixth inning was a killer,” Goodwin stated. “It was a very competitive game up until that point.

“It could’ve went either way and we just had the one bad inning. You’ll have those.”

Prior to the start of the doubleheader at Bennett Stump Field, the ceremonial first pitch was delivered by Mike Allen, the son of the late Larry Allen who was instrumental for area youth during his lifetime and was also a member of the 1959 American Legion Post 15 state championship squad. 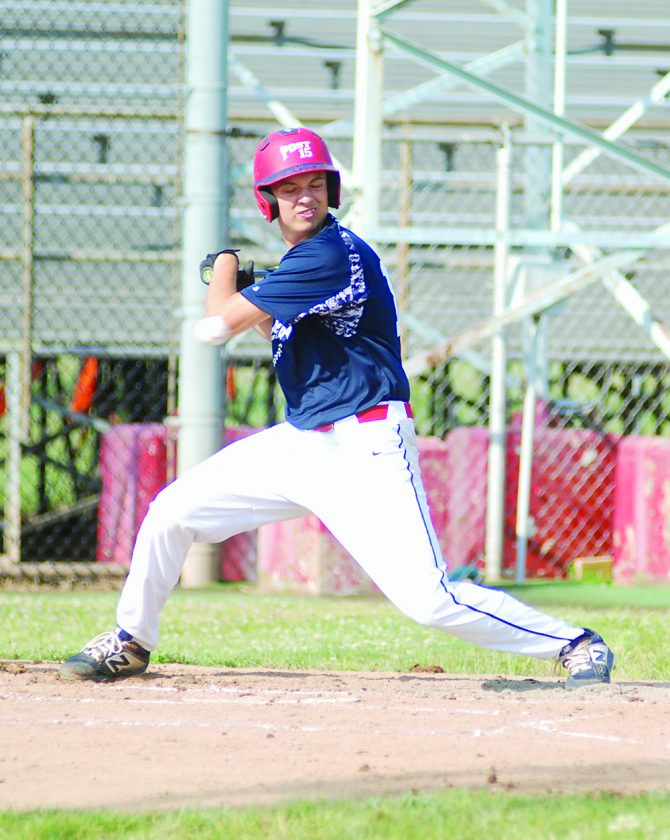 “It was great,” Mike Allen stated of the opportunity, which saw him deliver a strike to catcher Jacob Hoyt. “I go way back with Mike and I played for his dad (Jim) in the late 80s and early 90s.

“I’m always watching Mike and supporting him. It was great being out here and the first sporting event I know of in the area. It was just great getting out here.”

An infield single by Peyton Neff was followed by one to center from Trent Valentine in the top of the first as Cambridge tallied the initial run of the game when Logan Fox reached on an error. The locals were down 2-0 after a Clark Jennings sacrifice fly.

WCL’s Broedy Boyce opened the bottom of the second by lacing a triple over a leaping Kaden Whaley in sun-drenched left field. Brodie Wiggins, who pitched the final four outs, delivered a run-scoring single to center. A two-out RBI knock to left by Blake McMullen squared it at two.

Cambridge starter Fox, who didn’t factor into the decision after hurling 3 2-3 frames, appeared to be out of the third with a 1-2-3 inning. However, Max Anderson’s shot to Whaley looked to be initially secured when he leaped, but the ball came out. Boyce followed with his second hit and Anderson crossed by diving home after Hoyt had a run-scoring single to right. 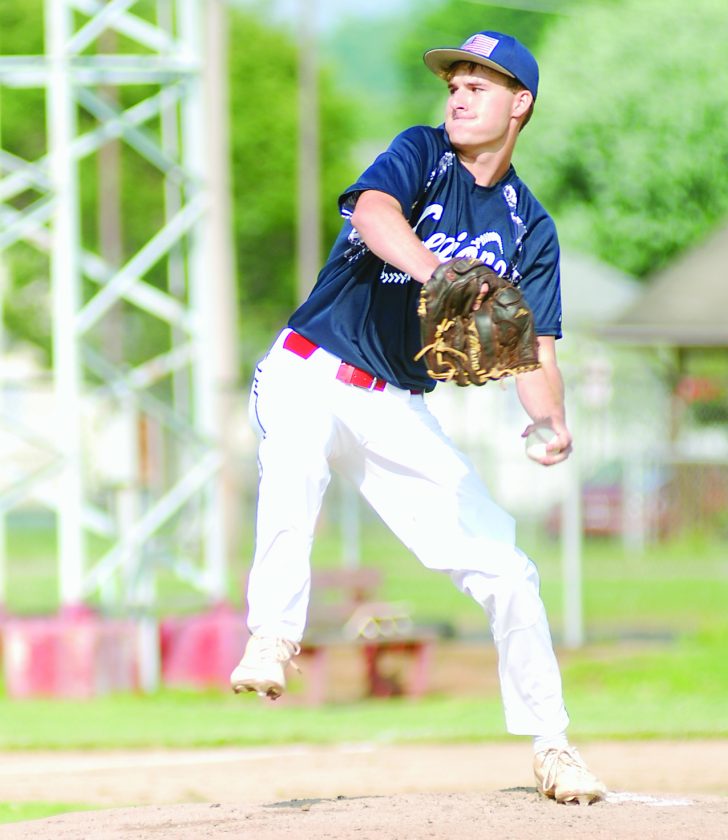 Although Valentine reached via a free pass and proceeded to steal second and third in the top of the fourth, Bryant was able to record consecutive strikeouts before a passed ball evened the score at three.

Brett Haskins opened the last of the fourth with a single and was sacrificed by Drew Woofter. Currey’s two-out, opposite-field single gave WCL its final lead of game one.

The visitors sent 11 batters to the dish in the critical sixth inning. Neff, who finished 3 for 4, started it with a double and scored on Fox’s RBI single. Bryant was able to coax Jennings to fly out to center, but was lifted after walking Ronnie Rominger. Pinch-hitter Tyler Dodd walked to load the bases and then Whaley drew another two-out walk which forced in a run. Garrett Burga had a two-run single in the barrage, which also featured a WCL error as well as run-scoring singles by Blade Barclay and Neff.

Cambridge still had the bases loaded with just one out in the top of the sixth, but Whaley hit into a 6-4 double play as McMullen made a diving catch almost behind second base and flipped to Boyce, who was able to step on the bag. Whaley had a diving web gem in the fourth to rob Jordan Batten of a hit.

Reeves singled and scored the final run for WCL in the seventh thanks to Anderson’s RBI single.

“Larry Allen was an icon and Mike played for my dad,” Goodwin said. “Mike and I are close friends. I wanted to do that.

“I was thinking of my dad, too, and Mike Allen losing his dad. I just thought it would be a really nice gesture to honor Larry by letting Mike throw out the first pitch.”

In the nightcap, Cambridge improved to 9-2 with an 8-6 triumph. Jensen Helmuth worked four innings for the win with Neff going the last three.

Reeves was saddled with the mound setback after tossing 5 1-3 innings.

Boyce tripled and drove in a run for now 4-2 WCL, which also received two hits each from Haskins and Izek Baldwin, who joined fellow teammates Anderson, Currey and Reeves with a run-batted-in.

WCL returns to action at 6 p.m. today when Marietta invades.