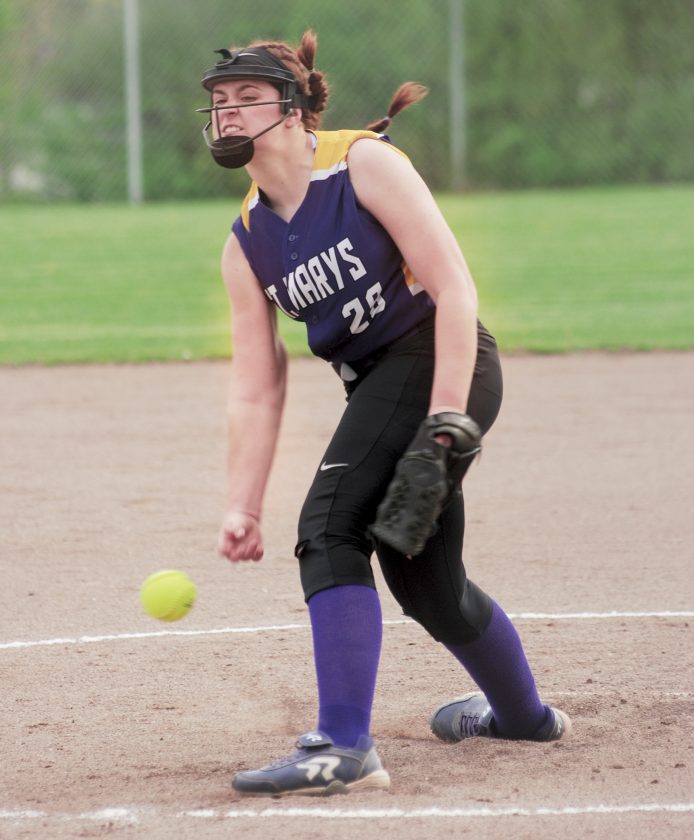 Photo by Joe Albright St. Marys pitcher Mahayla Nichols fires a pitch home during a 2019 regular-season game against Ritchie County. Nichols formed part of the backbone for the Blue Devils this season, and should do the same next year.

ST. MARYS — With no seniors and a new head coach, St. Marys’ softball team wanted at least some version of a season in 2020.

Though former Blue Devils’ assistant Lacy Mosser Riggs assumed control of the program, her past experiences with the girls didn’t mean everything as the player-coach relationship changed after this promotion.

Riggs’ coaching style along with new assistants brought several unknown dynamics to a group looking to return to a higher place in the hierarchy of St. Marys’ sports.

“This definitely would have been a year to grow,” said Riggs. “I don’t feel like we have a lot of respect in the community and we planned to start building that respect back this season.”

The beginnings of this construction project centered around Riggs’ belief in the idea that as depth builds competition, everyone on the team improves. To her point, nearly all players back from a ’19 team that went 9-11 could not confidently say they were starting in ’20. “It really doesn’t matter if they started, in my opinion the best player gets the position,” said Riggs.

Now, the first steps of the plan wait to be taken until 2021 thanks to the COVID-19 pandemic.

“I hate that we missed the season,” said Riggs. “If we were losing we were at least going to be learning. But from the start of practice we were able to get right to business and there wasn’t a lot of goofing off so that was an encouraging beginning.”

Returning starting pitcher Mahayla Nichols provided a solid starting point from inside the circle. Her ability to navigate through Class A lineups would’ve left the team with time to figure things out before the postseason.

“She works hard and I see her with her dad at the field all the time and she is a good kid and I am very glad to have her as my ace pitcher,” said Riggs.

Left-handed freshman pitcher Ella Smith figured in as another tough arm allowing Nichols to rest or focus on batting on days she hit. Obviously, this was a tall task to ask of a first-year pitcher, but Riggs said Smith brought an intimidating presence and big bat, as well.

“She’s a well-built young lady who throws hard and who is a great addition to our team,” said Riggs.

Both their bats would have added more to a batting order looking sharp throughout the opening days of practice. “We focused a lot more on hitting to take some of the pressure off our pitchers. You have to hit to win ball games and a hitting team is hard to beat. Our focus was to have an all around good team with depth,” said Riggs.

As three-year starters Olivia DeWeese, Lara Fetty, Hannah Dearth, Des Taylor and Sydney Hinton returned to the fold, this wish for a deep team regardless of who started likely would have transpired.

Despite the delay, it hasn’t tampered their head coaches expectations for summer and beyond.

“Oh, I definitely can’t wait for the hopeful three-week window, I have a great group of kids. It is a major blessing we didn’t have any seniors this year for myself and for the kids. It would have been heartbreaking not getting to play their senior year,” said Riggs. “The next few years are looking really promising and we are going to see softball talent at every position that St. Marys hasn’t seen in a long time.”