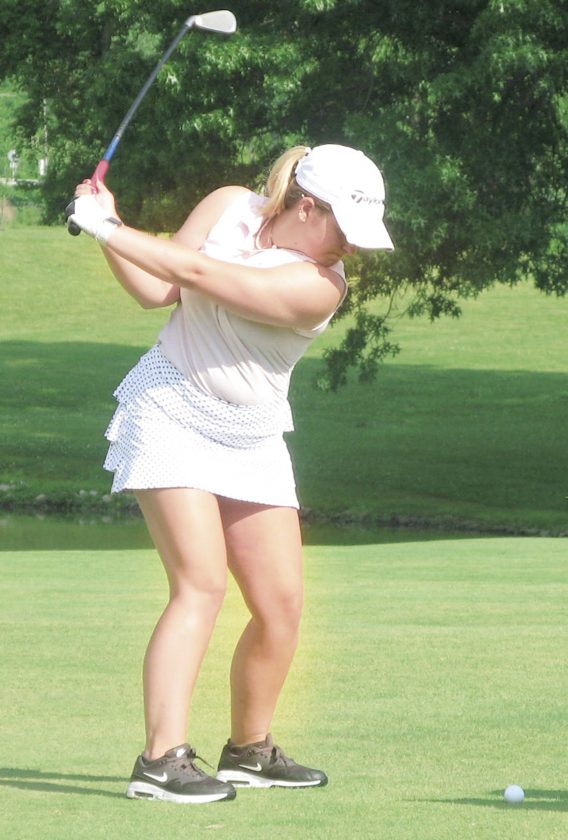 Photo by Jay W. Bennett PHS senior Nicole Lincicome lost 3&2 to Savannah Hawkins, who will be a freshman at Teays Valley Christian, on Saturday morning at Parkersburg Country Club in the W.Va. Girls Junior Match Play Championship. Lincicome was going for back-to-back titles.

Defending champ and top-seeded Nicole Lincicome, who will be a senior this year for the Parkersburg Big Reds, ousted the Hurricane resident in last year’s semifinals at PCC.

“I mean any day I would rather get beat by good golf than just give it up,” said Lincicome, whose day ended on No. 16 with a 3 and 2 setback. “She played really well and I’m really proud of her.

“I’ve never seen a field of eight girls that’s been able to compete at the level we all did. I’m proud of everybody.”

Hawkins reached the final by edging Charleston’s Emma Nicol 2 and 1 on Friday and then squeaking by Big Red Molly McLean 1-up later that day.

Leading by two through nine holes, the margin remained the same until Lincicome made birdie on the par-4, 12th as Hawkins’ drive found the bunker.

“I don’t know,” Lincicome said while trying to put into words what transpired the next four holes. “I felt like a little on fire and I think I got a bit of an adrenaline rush and got ahead of myself and probably let some shots that I could’ve made go and left some putts short, but that’s golf.”

If there was any doubt about the moxie of the 13-year-old it was soon squelched when she regained control by nearly making eagle at the par-5, 13th after reaching in two.

“I hit a 5-wood from 224 and I got lucky and I got a good bounce,” Hawkins said with a grin. “I got a really good bounce actually. It bounced up and rolled right up there. That was pretty important. I need that.”

Hawkins went 3-up after making par on No. 14. Both players missed the fairway to the left on their drives, but Lincicome was victimized by her putter.

The Big Red, who topped teammate Anna Earl 7 and 6 in the quarterfinals before eliminating Milton’s Taylor Sargent 4 and 3 in the semifinals, bounced back on the par-3, 15th to be down two. Although her birdie putt just slide past the hole, Hawkins’ tee shot barely crossed the water and was short of the green.

Although both players hit their drives out of bounds on No. 16, Lincicome had to win the par-5 hole to extend the match, but an approach shot helped thwart her effort when it landed in a greenside bunker.

“She made it look so easy,” Lincicome said of Hawkins’ second shot on No. 13. “She’s a great player. I was really lucky to play with her.”

Hawkins, whose home course is Sleepy Hollow, won the first hole. After Lincicome tied it at the third, the future Lion pounced by winning holes 4, 5 and 6.

“I’ve played a few times, but it’s much faster and firmer than Sleepy so I had to really get used to it,” Hawkins said of playing at PCC. “I mean it was one of my big goals and it feels pretty good.

“My goal was really just to make it to today. My dad always tells me to swing free and don’t be nervous about it. I tried not to be, but there was a little nerves.”

Sixth-seeded Todd Duncan, the 2019 Class AA state medalist from Shady Spring High School as a junior, seized control in the finals after winning holes 9, 11 and 12 en route to defeating Charleston’s Anderson Goldman 4 and 3 for the other title.

Duncan rolled into the finals after besting Fairmont’s Clark Craig 7 and 6 on Saturday morning.

Ripley’s Davis Haynes, the No. 12 seed, upended fifth-seeded Matthew Aman of Bridgeport 3 and 1 in the round of 16 on Friday, but later fell to the fourth-seeded Goldman 4 and 3 in the quarterfinals