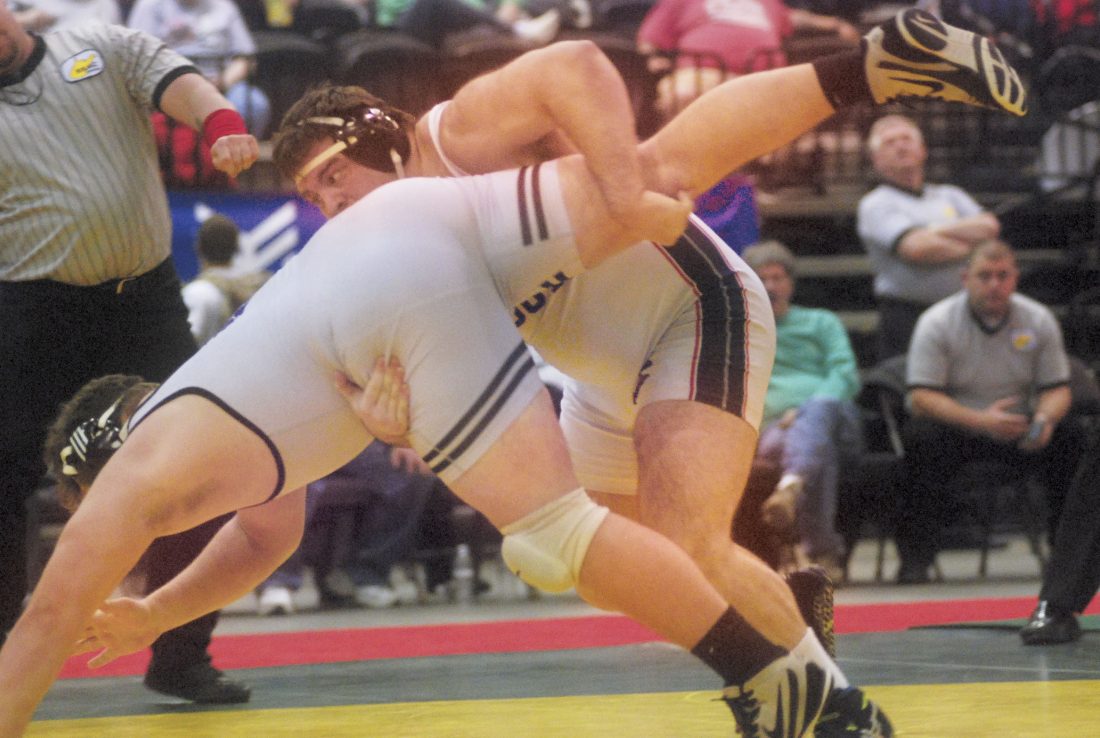 Photo by Jay W. Bennett Current Lehigh and former Parkersburg South wrestler Louden Haga, seen here participating in the 2019 Class AAA state tournament, dealt with a roller coaster of emotions the past 18 months. First he was on cloud nine, then he suffered through depression after a chest injury, now he’s back to feeling his usual upbeat self as he trains for his return to the Red Hawks team.

PARKERSBURG — An athletic standout in the Mid-Ohio Valley rode an emotional roller coaster for the last 18 months.

The early months of 2019 delivered nothing but good news to the usually upbeat Louden Haga.

On top of making a commitment to wrestle for NCAA Division I program at Lehigh University at Bethlehem, Pa., he won a long-awaited Class AAA heavyweight state championship at the February meet in the Big Sandy Superstore Arena in Huntington. His points then contributed to another celebration as Parkersburg South took home a sixth straight team title later in the evening.

The good vibes didn’t end after he received his diploma in May. Over the next two weeks, he spent time doing the two things he loved more than any other: lifting weights — the most he had ever lifted, he said –and wrestling. The workouts further prepared him for his opening days on the Mountain Hawks, which were fast approaching when June arrived.

His first two days on campus brought more fun as he met his teammates and learned the layout of the school.

Heavy doses of wrestling and lifting took up the majority of his time, however.

Though he was prepared to be physically battered, it wasn’t going to stop him from readying himself for the rigors of D-I competition. His biggest learning experience would come in the form of Jordan Wood, Lehigh’s returning heavyweight who came in fourth place in the 2019 NCAA Tournament.

“I knew I was going to get better and was fairly confident I knew a good bit about wrestling at this point,” said Haga. “I was hopeful there was at least one thing I could show Wood he hadn’t seen yet.”

His words took on a prophetic meaning during the teams next lifting session on June 17. While performing sets of six bench press reps at 300 pounds, his grip on the barbell ended up too wide and his right pectoral muscle swelled during the exercise.

“I told the guys to get the bar off me because I couldn’t bring it back up,” he said.

The bad news worsened after he returned home to Parkersburg.

Haga suffered one of the rarest injuries in sports. His pectoral muscle had completely torn.

“My surgeon said he had only seen one other,” Haga said. “I thought ‘Way to go, you just ruined your freshman year of wrestling.”

Contrary to his grandfather David Jeffery’s belief, his grandson had not injured himself showing off. He was just doing what the coaches told him to do.

Though his sling came off shortly before school started, his hardship was just beginning. “It is hard to describe. It sucked. It really sucked. I was watching practice and not able to participate,” Haga said.

“I think the toughest thing about being hurt your freshman year is you don’t understand the system, yet,” he said. “Your identity is as a wrestler at this stage and now he couldn’t do the workouts and was just doing the rehab.”

This rough first semester led Haga down a dark path. He missed out on not just in wrestling, but other college experiences. Depression had taken hold of him and there were days he didn’t get out of bed to go to class.

“I didn’t really manage it (the depression) and just went through it,” said Haga.

A few times he even considered transferring, but he believed things would get better.

They wouldn’t get better right away.

Lehigh currently sat in the middle of the best wrestling seasons in the school’s history.

“I just wanted to get out on the mat and contribute. I hate sitting around and doing nothing,” Haga said.

Some things got better after he started seeing a school psychiatrist this past January. By then, he had returned to doing drills on the mat with assistant coach Zach Gray, so some semblance of normalcy returned to his daily routine.

But just when he started enjoying his time in Pennsylvania, the COVID-19 pandemic hit and the school shut down.

This left him doing online classes, or as he called it “the worst part of college,” for the remainder of his first year.

Now that the semester is over, he’s returned to the mat and is making up for lost time with friends and fellow college wrestlers Hunter DeLong and Luke Martin.

His goal is simple.

Santoro is confident the sophomore Haga has what it takes.

“Loduen will figure it out with muscle memory and if he has an open mind. He has to remember he lost seven to eight months and needs to get in shape. He is one of the top 3 heavyweights in the country in terms of strength,” he said.

“He just has to have confidence even though his mind is going to be racing in his first few matches back. These guys have done this hundreds and hundreds of times before. But coming back is going to be a process. He has to be process oriented and not results oriented. He is always going to get better when competing against the highest level of competition and a guy that beats him in November may not beat him in February.”

Haga is anxious to return to the mat and the team.

“I am looking forward to being part of the team again. The guys are great. The coaches are great and happy days are here again for me,” Haga said.