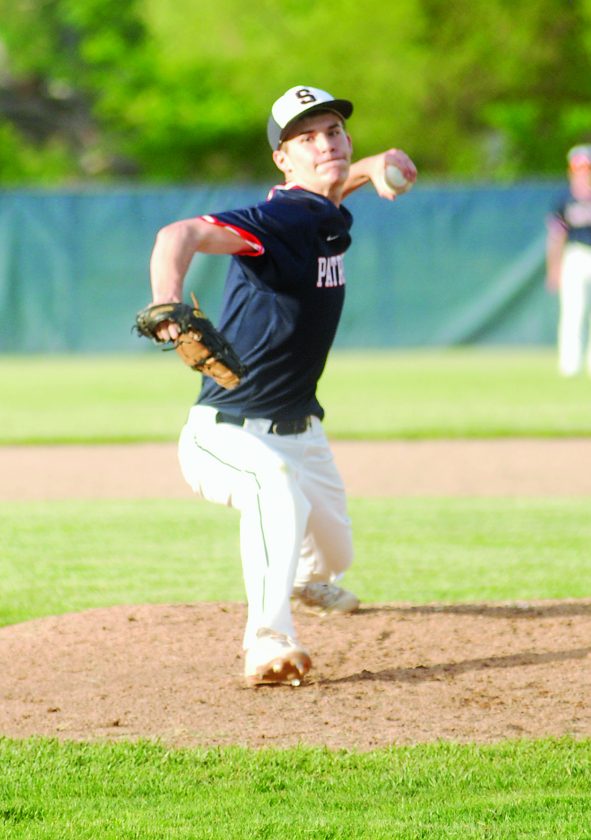 PARKERSBURG — Baseball coaches know the importance of having quality left-handed pitchers on their staff.

Bryant, who was set to be a four-year letterman before having his season called off due to the COVID-19 pandemic, was a two-time first team all-Ohio Valley Athletic Conference selection. He was eyeing a slot on this year’s Class AAA all-state first team after picking up a second team nod as a junior.

“That is the plan, to help out the pitching,” said Bryant, who had a 3.8 GPA as a senior and plans to enter college with an undeclared major although he’s thinking about business.

“I think I have a pretty good shot being in the rotation next year. It sounds like they are very short on left-handed pitchers. There’s some good things to be left-handed.”

After mainly just pitching as a sophomore for the Patriots, Bryant continued his mound work as a junior and also played in the outfield. He expected his role to be the same this year.

“Our team was definitely looking forward to see what (first-year head coach Matt) Emerick could do,” added the lefty. “He’s coached me in the past when I was in middle school. We were excited and really hoping for a big year. This was going to be our big one. We just got cut short.

“It’s really tough for everyone really, not just the seniors. It does suck you get one year taken away from you. I bet the underclassmen already feel like they are graduating. I’ve had three years of high school and I’m not over it. For a lot of people, it was their year to show what they were made of.”

Although he considered Bethany and Fairmont State as his college choices, he ended up opting to spend the next four years in Buckhannon.

“Before a workout I went up there for a tour around campus,” Bryant said. “I like it. I really do like it. It’s very nice and I think it looks good up there.”

What’s looking good for Bryant currently is the fact he’s expected to start practicing in less than a week for manager Mike Goodwin’s Wood County Legion squad, which is playing independent this summer as opposed to competing as usual for Parkersburg Post 15.

“I am ready to get back on the field,” he stressed. “It’s been way too long. I was tired of being cooped up in my house. Since quarantine started I’ve been resting my arm, but I’m going to start throwing.

Bryant, who throws a two-seam and four-seam fastball, also features a curve and a knuckleball in his repertoire.

“Probably my fastball because I know I can throw a fastball for a strike almost every single time,” he said when asked about his top pitch.

Around the middle of last month, Bryant said he got the word from Goodwin about the hopeful return of at least some form of summer baseball.

“He was trying all he could to try and get something for us in the summer, especially the seniors who aren’t going to play high school baseball again,” Bryant noted.

“He’s done a really good job and got with our parents and he’s been having conference calls. He’s definitely been in contact with the parents.”

“I mean I have a lot of opinions on the COVID-19, I do, but I think everyone has an opinion on it,” said Bryant, who added “at least we’ll be outside. I’ve been trying to quarantine myself.

“I’ve been trying to. I did it for the first two weeks and was at my house every day and didn’t do anything. Then I started going out places and have just been trying to get out of the house.”

As anxious as he is to start college, Bryant is just as pumped about being back with some of his former Patriot teammates even though it’s WCL and not Post 15.

“I’m looking forward to both,” he said. “I like hanging out with my friends and I like playing baseball with them. I like playing for Goodwin as well and I will like going to Buckhannon, too, and playing baseball and hopefully helping them out. I think pitching-wise and school-wise South has done a pretty good job of getting me prepared. I’m going to tackle it (college) head on.

“I think my coaches got me prepared against better competition. I personally haven’t pitched against a non-ranked team except sectionals since probably my sophomore year. My three losses (last year) were against Hurricane, St. Albans and Morgantown and they were (ranked) one, two, three. I didn’t give up an earned run against St. Albans down there and they won the state tournament.”