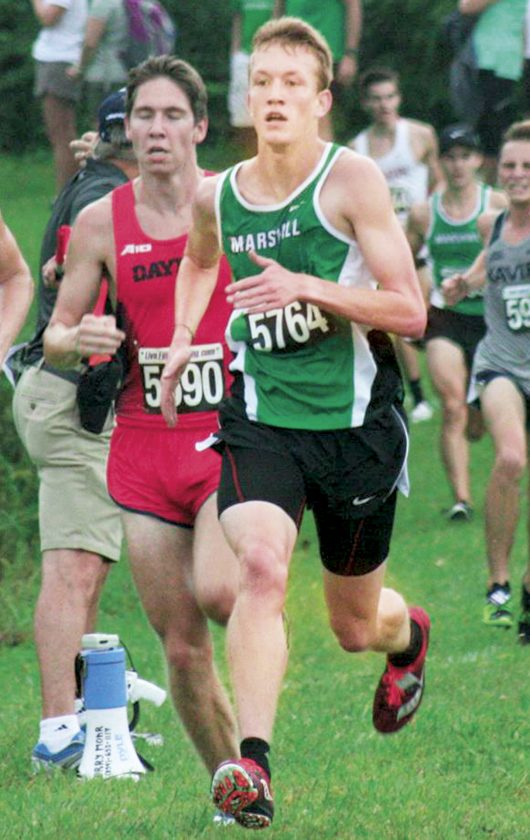 Parkersburg High grad Ian Domenick ran in five of Marshall cross country’s six meets this past year and placed in the top five in four of them. However, he has been working his way back from an injury since the Evansville Invitational in October. Photo courtesy of Herdzone

PARKERSBURG — Ian Domenick continues to try and do his thing as a runner for Marshall University, but nothing worth having ever comes ea sy.

The 2018 Parkersburg High School graduate, who won the 1600 at the Class AAA state track meet as well as earning all-state honors in cross country as a senior, hasn’t had the smoothest ride thus far as a member of the Thundering Herd.

During his freshman cross country season, he competed in five of six meets and placed in the top five for MU in a quartet of those.

Things were going OK health-wise during the 2019 campaign before he was sidelined via injury in October at the Evansville Invitational.

“Honestly, coming out of the summer I was dealing with some nagging injuries,” admitted the exercise science major with a minor in sports management who still plans to attend dental school to become an orthodontist. “Once we got into the season it started to get a little more serious. When we were down in Evansville, which was my final meet that year, my calf just kind of gave out on me finally. I had to take six to almost eight weeks off.

“I had a Grade 2 calf strain. It was hard to walk and I couldn’t run anything. Down here at Mountain River (Physical Therapy) they had me training on the underwater treadmills and anti-gravity treadmills. I was actually able to get back pretty quick after the original diagnosis. Luckily, under the new NCAA rule you don’t have to sit out a whole season and run unattached if you don’t run your conference or regional meet. I got to redshirt last year so I still have three years of eligibility.”

Domenick credited “Joe (Leaman) and them at Mountain River” for getting him back and said after Christmas break “that was the first time I was able to start putting mileage on. It was so touchy-feely.

“Some days I’d be able to go out and run 3 miles and feel good and the next day I could barely run a half mile. It depended on how I felt that day. We had to retrain the muscle pretty much because of the time off during winter break.”

The former Big Red was able to compete at a trio of home indoor meets, but then COVID-19 happened.

“I felt like I ran pretty well,” he said. “It was honestly exciting for me to get back out there and going through that and just having a chance to go out and compete again. I enjoy that. The outdoor season I couldn’t run because of the COVID and all that stuff.

“When we were finding out about all that stuff it was just day to day and we had no idea at the time if we were going to have a season. When we found out school was over and we couldn’t have our outdoor season it was kind of sad. All the training we had put in as a team and for me to finally feel like I was back to the point in really good racing shape and to have it canceled like that, not the way you want to see it go.”

Although the second part of being a student-athlete has presented plenty of challenges, Domenick continues to have little issue in the classroom.

“Definitely making the (Conference USA) Commissioner’s Honor Roll for a second time was a really good achievement,” said the now official redshirt junior who has around a 3.6 cumulative GPA thus far. “It’s definitely a streak I’m trying to keep going. I definitely made the right decision where I went.

“It’s just awesome to get to compete against some of the biggest schools in the country and just having the opportunity to represent not only Marshall and myself, but also Parkersburg and family. I’ve really enjoyed the experience to travel and race some of the best of the best. It’s a surreal experience to get on the line and you got schools like Ohio State and Kentucky next to you. It’s been a fun experience so far and I’m definitely looking forward to the next three years.”

Currently, Marshall doesn’t have a dental program, but if that changes Domenick might stick around and continue competing.

“I’m not sure what I’m going to do with that,” he said. “I think we’ll cross the bridge when we get to it. I’d love to run all four of my competitive years there.

“I’ve enjoyed the experience and I love the coaching staff and the team. It’s been awesome to be able to compete. A lot can happen in two or three years.”

Domenick, who also was a first team all-state defender in soccer, said he’s trying to stay busy by keeping in shape, being a ref at Vienna Recreation and also working for a cleaning company.

He’s hoping the rest of his time in Huntington will bring out many more great experiences.

“A lot of the kids on our team are kids I’ve raced in my high school career,” he added. “You know these guys from competing against them and now you get to be on their team. It’s a surreal experience.

“If I could tell my younger self something, honestly just enjoy the moment. It’s a once in a lifetime opportunity to be able to compete at the Division I level. I’m getting to live out my dream I’ve had since I was a little kid. Take it all in and enjoy it. It’ll be over quick.”