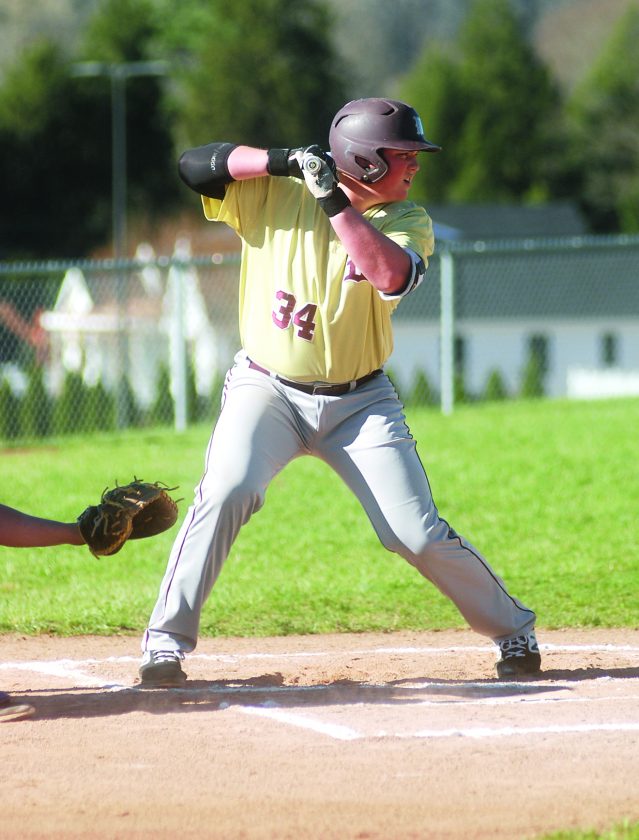 WILLIAMSTOWN — Leewood Molessa is trying to make up for lost time as he prepares to enter his senior year at Williamstown High School.

The first-team Class A all-state offensive lineman didn’t get to play baseball this spring for now retired skipper Terry Smith.

However, his passion for the diamond continues and he’s currently competing for the 17-and-under Bo Jackson Elite travel team out of Columbus, which has eight Division I signees.

“It’s been the best baseball I’ve ever been a part of as far as competitive-wise week in and week out,” said Molessa, whose brother Maxwell is playing on the 14U squad. “You’re playing people committed to Michigan and Xavier. You’re playing big guys.”

During high school, Molessa usually plays first base and pitches, but he’s got a different position this summer.

“I actually catch, mainly just catch,” he said. “That’s where I fit in the roster. That’s just what worked for me.”

Standing nearly 6-foot-3 and depending on the day weighing around 235 pounds, Molessa wants to play a sport in college, which could end up being baseball.

“I hit the ball pretty well,” he added. “When you get to the next level that’s their only job. There’s a lot of people who can play first base and stand there and catch and scoop a baseball. I’d like to think I’m good, but there is always someone better and in my case they are a lot better.”

The Yellowjacket was initially going to play for the Cangelosi BlackSox 17U squad, but an opportunity arose for a spot on the BJE 17U team and Molessa beat out the other player to earn his spot.

“The last three weeks we’ve had three tournaments,” Molessa said of being in Newark, Ohio, then at Cincinnati’s Prasco Park along with Grand Park in Indiana.

He left Wednesday evening for a tournament in Georgia at LakePoint.

“I do as much of it as I can,” Molessa said of football conditioning during the summer.

“I only play for six or seven weeks. I’ll only miss like six days so it’s like a vacation week.”

One thing he’s learned by being part of the team he’s currently on is “that there is a different level of baseball out there. It’s a lot more of a challenge.”

Adjusting to the catcher role hasn’t been too difficult.

Molessa said he did catching workouts before practice with Ethan Tawney and did various drills under the watchful eye of coach Smith.

“My arm has gotten a lot better this year,” he added. “I think that’s where I’ve grown a little bit and my body is starting to fill out better and my mechanics are getting better.

“We’ve worked on it and with more experience it’s better. You can do all the practices you want, but getting to play games as a catcher is the biggest thing and we’ve played enough where I feel comfortable.”

Although he’s got plenty of time to make a decision about college, he’s looking into everything and trying to figure out what the future might hold.

“I’ve got a couple scheduled and I’m visiting with a couple coaches,” he said of baseball. “I’m not going to mark football off to not being able to play at the next level.

“It’s always cool to think you could go play both if I had that opportunity, but I lean more toward baseball just because I get to play more and I enjoy it a little more.”

That might be the case, but Molessa likes spending time on the gridiron.

“During football season we are in football. You put the baseball bat down and the glove and let’s roll,” said Molessa, who will play his final season for former assistant and now first-year head coach Chris Beck.

“Our coaches are great. Coach Smith left them in a great spot and coach Beck is really doing a great job with all the new coaches. We’re not going to miss a beat. We are going to keep right on trucking.”

The ongoing COVID-19 pandemic continues to cloud the future for all student-athletes.

However, Molessa is trying to stay positive on all fronts.

“It sucks and I really didn’t want to miss my junior year of baseball. It’s so important for the recruiting process,” Molessa stressed. “You look at it from the logical point, there’s nothing I can do about that. There’s nothing anyone on the team can do about it. Coach Smith always said you take care of the things that are controllable. I want to play football and I think we are going to play.

“I don’t think it’s going to be like baseball. I don’t think they are going to cancel a whole season, especially with them letting everyone starting conditioning and stuff. The whole team and all the coaches fully expect to play this fall. I think that helps brighten everyone’s mood and they are working hard. I know everybody feels that way. Everybody feels that we are going to play. There’s no one that’s doubtful of that.”

Summer baseball will be over soon and then the two-way lineman will turn his full attention to trying and help Williamstown claim a state football championship.

“I’m really looking forward to it and I’m really excited for it,” Molessa added. “I mean it’s my senior year of football. Everyone is talking about it. I don’t know how it’s going to be if people can’t come to the games. The talk of the team is what does it matter.

“We’re there to play for ourselves. We love to play for the town and the city of Williamstown, but when it comes down to it we are going to be playing the same game with or without people. We bring the self motivation and we’re going to have it that day.”