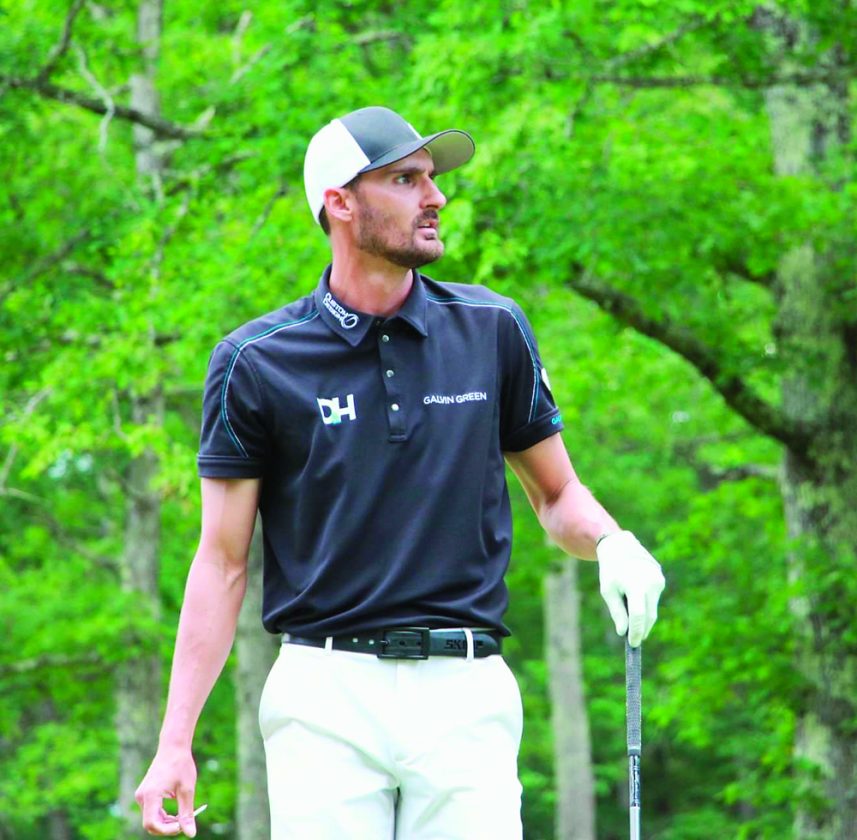 Photo Provided by the W.Va. Golf Association The 87th W.Va. Open champion Kenny Hess looks on during Thursday’s final round on the Cobb’s Course at the Resort at Glade Springs.

PARKERSBURG — Wanting to win and doing it are two different things.

No one has to explain that to Parkersburg South graduate Kenny Hess, who finally broke through Thursday afternoon on the Cobb Course at the Resort at Glade Springs by winning the 87th West Virginia Open by a single stroke after firing a 6-under par final round 66.

“I felt really good going into the week. I felt good in the pro am,” admitted Hess, who topped fellow pro Thadd Obecny of Wheeling by a single stroke (210 to 211) during the three-day event.

“I played really, really steady golf on Tuesday (was day one leader with a 3-under par 69) and made birdies where I should’ve and stayed out of trouble.”

It sure didn’t take long for him to find trouble on Wednesday when he started on the back 9 and proceeded to begin his afternoon with a double bogey on the par-4 10th.

“The first tee ball was a bad swing. I snap hooked it and hit it out of bounds,” admitted Hess of nerves getting to him.

Although three birdies and a bogey followed during the next dozen holes, Hess was still at 3-under entering the par-5 fifth until he carded a snowman.

“I have a lame excuse,” Hess quipped of his eight. “On the swing when I was hitting the tee ball, I whiffed it dead right out of bounds.

“I just started my down swing and a fly went right across my face and I flinched. I was like, no, you got to be kidding me. I four-putted for the eight. I definitely earned that eight.”

After making par the rest of the way, Hess went to sleep Wednesday night trailing Obecny by three strokes.

“I loved my position,” Hess said despite losing the day one lead. “I was in the final group playing with Thadd and I was in chase mode to go get him.

“You got to fire at flags and go make birdies. I started hot. I threw a dart on one and it was just too much club and it went over the back of the green. I looked at my dad and said adrenaline.”

Following consecutive birdies on two and three, Hess got a measure of revenge at No. 5, which he also birdied.

He bounced back from a bogey on No. 8 with a birdie to close out his 3-under par front nine.

Battling back and forth with Obecny and having various other pros trying to make a charge behind him didn’t seem to faze Hess whatsoever.

“I was kind of in the zone and dialed in,” he said. “I don’t remember much about the people. I guess it was a lot (following).

“Everything was tuned out. I wasn’t paying attention. I was just in a good zone and I was playing golf. I was comfortable and wasn’t nervous and I was just grinding it.”

Tied going into the 54th hole of the championship, Hess hit 3-wood, 5-iron and then wedge to get on the par-5 18th in three.

“I think he misplayed the hole,” Hess said of Obecny. “He hit iron and iron on his second shot. He was like 150 yards out and I was like 84 yards.”

The first-time W.Va. Open champ said he knew he had to hit “it past the flag and it has to back up.

Hess was later asked by the media what his read was on the final putt.

“I don’t even remember it. It’s all a blur,” he added. “I was going into today (final round) ready to fire at anything. I had no fear and I was in my own right mind thinking through every shot.

“I had one hiccup. I made a really bad stroke on a 3-footer on number eight and made bogey, but got it back on nine. I just played really solid on the back nine and hit some clutch shots when I needed it.”

Hess was more than ready heading into the championship as he had been working with Michael Robinson of Full Process Golf in West Palm Beach, Florida.

He knew his game was in solid shape overall, but it was something he had to take out to the course and then execute.

“The golf swing, it’s so much better than it was last year,” added Hess, who said he had 80-some text messages waiting for him on his phone. “It’s awesome. It’s good to bring it home. All the hard work paid off. Hours and hours of work. I put in a lot of work the last three weeks to get to where I needed to be.

“It was good to go in there and compete. The whole goal this week I wanted to play good golf. If I got beat I got beat. I probably played 50 holes of good golf out of 54. Win or lose, I was going to be happy if I played good golf. It just happened I birdied three of the last four to win it.”