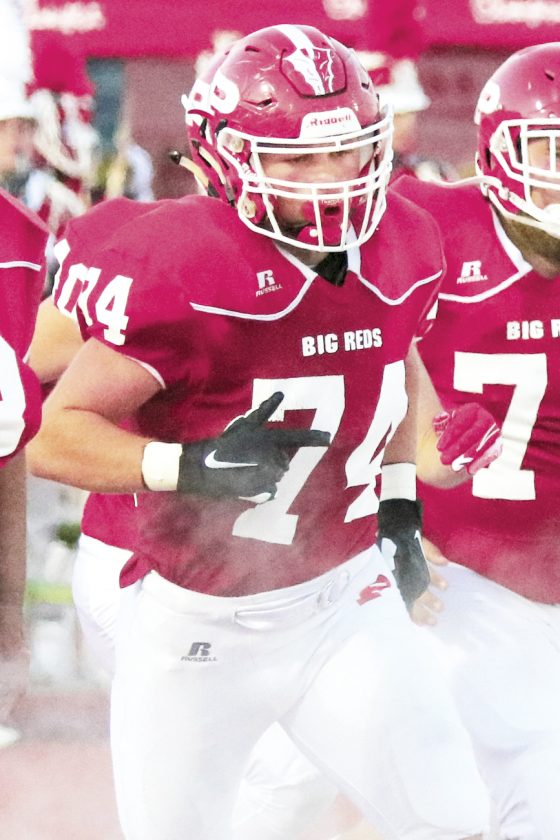 Photo by Duane West Parkersburg High linebacker Gage Fiore runs out of the helmet with his teammates before a 2019 regular-season game. Fiore, a three-year two way starter for the Big Reds, is anxious to continue his academic football career at West Liberty.

PARKERSBURG — Gage Fiore is ready for whatever it takes to get a shot at playing time in his first season for West Liberty University head football coach Roger Waialae.

The first team all-Mountain State Athletic Conference linebacker, who was a three-year two-way starter for Parkersburg Big Red boss Mike Byus, is anxious to compete for the Hilltoppers.

“Coming in as a freshman I’m going to do my thing and work hard, try to make my way on special teams and any packages that I can on defense,” said Fiore, who is leaning toward majoring in criminal justice.

After making official visits to WLU, Fairmont State and West Virginia State, he narrowed his choice to the Hilltoppers and the Yellow Jackets.

“Their field is still the old grass field, but the locker room and facility is really nice and it’s new,” Fiore said of W.Va. State. “They’ve got a good thing going on down there.

“The campus was a little small. Probably the campus (at WLU) won me out. It kind of had that college feel and to know it’s not too far away and if I needed to come home I could.”

Fiore said of his experience trying to chose a college it’s “almost like you are looking to get a house or something and you are like can I live here?”

Now that he has a new home for the next four years, Fiore just wants to get back to doing what he loves — tackling the guy with the ball.

Following his freshman year where he also pulled double duty on junior varsity, Fiore stepped in as a two-way starter at linebacker and on the offensive line.

He made 45 total stops as a 10th-grader, led the Big Reds in tackles as a junior with 94 and tacked on 105 more this past fall.

“Wherever they need me. If they need me to be somewhere, that’s where I’ll go,” he added while noting with athletic money, the PROMISE Scholarship and other academic awards he’s “not looking to pay a whole lot.”

Although Fiore didn’t mind playing basically the entire football game during his prep days, he’s looking forward to just concentrating on one side of the ball.

“They get a little bigger when you get up in college,” Fiore admitted of the offensive linemen. “It’s not a big thing. It’s attitude. You have to bring attitude on the line. It’s not all about size.

“I’m definitely ready. I’m pretty confident I’m going to go up there and do my thing, work hard like I always do and earn my way through. I’m not really too worried about anything else. They’ll see where the work lies.”

Despite having his last couple months of high school wrecked by the COVID-19 pandemic, the Big Red has stayed the course.

“I definitely still work out. Usually I just go in the morning,” Fiore added. “I’ll run a Murph crossfit type workout. Then on the days I don’t do that I’ll lift and I got weights in my basement.

“It definitely sucks, but I definitely don’t really dwell on it too much. Life is going to continue going on and you go through different challenges, but I’m not going to dwell on it much.”

Fiore also said he has managed to find time to “hang out with the boys and I see my girlfriend and I go around and do jobs around the neighborhood.

“I mow, weed whack and cut trees down and make money that way. Once this dries up, I’ll go to my buddies and do hay and do fencing.”

Being a dedicated student-athlete is exactly what Fiore was at PHS and he doesn’t see that changing for the Division II Mountain East Conference Hilltoppers.

“I really take a lot of pride where I come from,” Fiore stressed. “Being able to represent the Big Reds and doing it at a level that was pretty high, that’s something I was really proud of.

“Represent them, myself and my family name and represent the school. It meant a lot to me. It’s a really storied school and definitely a lot of history there. I’m really proud to be able to represent that and showcase for all the ones who came before me.”

Back in January, the Big Red competed in the Blue-Grey All-American Bowl at Raymond James Stadium in Tampa.

“I played really well,” he said. “We ended up losing the game, but it’s an All-American game so basically it’s a showcase.

“Wins and losses don’t really matter. I played real well, had several tackles and we had a rotation of linebackers that would go in. My group, we were the first group.”

Overall, the Mike linebacker relished his time with the red and white at Stadium Field. That included making three trips to the Class AAA postseason.

He knows what it took to have success as a prep athlete and he doesn’t figure to change anything during the next four years.

“One thing I’ll always remember, I always loved practice in the summer and definitely the games and the guys,” said Fiore, who coach Byus called a Dick Butkus type throwback player.

“I’ll remember the guys. The games come and they are fun and you celebrate with the guys and go through the hard times. You are really made in the off season, the summer and practice. That’s really what I enjoyed the most.”