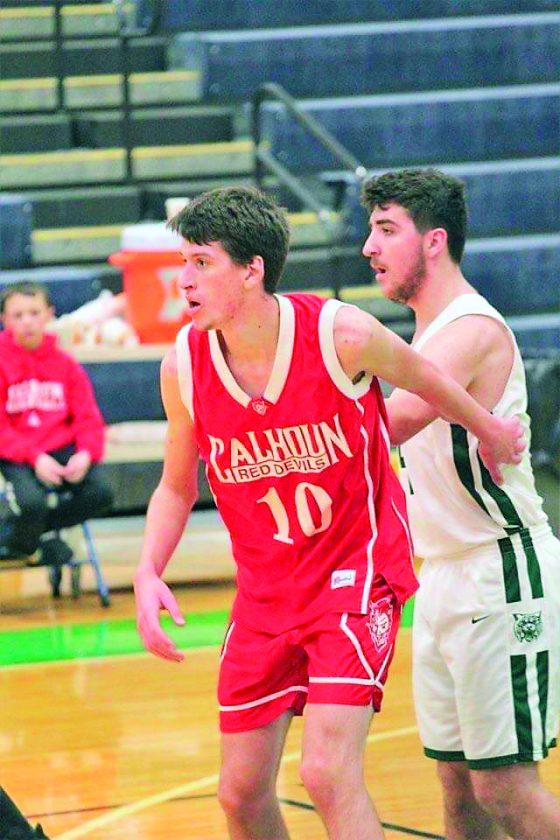 Thanks to West Virginia Wesleyan head coach Nick Patella, the ex-Red Devil will have an opportunity to compete in the Mountain East Conference for the the Division II Bobcat program located in Buckhannon.

“I asked Marcus (Davis) if he could talk to any college coaches for me,” Moore said of his CCHS head hoops coach.

“I hadn’t received any offers. Coach Patella was one of the only ones to respond and we just went from there.”

Moore, who earned third team Class A all-state honors last winter, wasn’t able to visit the campus because of the COVID-19 pandemic, but said he’s thinking about pursuing a degree in computer science.

“It’s a field I’m interested in,” admitted the 6-foot-8 hoopster, who led the Mid-Ohio Valley in blocked shots with 118 for an average of 5.1 per contest. “I’ve been trying to get out and just play as much as I can with all this stuff going on. I normally play in Spencer at Washington Park. I don’t know if I’m done growing. I hope not. It would be nice to get a little taller.”

A two-year varsity player while at Calhoun County, Moore had a monster senior campaign but basically no offers.

“I didn’t expect much,” added Moore, who averaged a double-double a game by scoring 16.1 points and grabbing 12.5 boards an outing. “I expected what I got, which was a lot of nothing. I still tried as hard as I could, just in case I would get something.

“I knew I’d have to prove myself to get anything at the next level. I’m glad that I got to play under Marcus. He was a big help in me even going and having a chance at the next level. His coaching and him pushing me made me a lot better player.”

As a senior, Moore shot 52% from the floor and 79% at the free-throw line. He also averaged two steals and 1.6 assists a game.

“There was a little more running the ball through me on offense. Me touching the ball every time down the floor trying to help get us more efficient numbers,” Moore added. “As far as the next level I think I’m going to have to work on everything because I know college ball is a whole other thing compared to single-A basketball.

“As far as my strengths, I think my shooting is OK, but I’m obviously going to work on everything. Probably one of my biggest weaknesses is ball handling. I’ll have to work on that a lot. I spent like almost the entire offseason in the weight room and I gained probably 15 pounds between junior year and senior year.”

Moore understands he has to make a lot of improvements, but hard work is something he’s ready to continue doing.

“I’ve been lacking in the weight room,” admitted the first team all-Little Kanawha Conference selection of just one of the issues with the pandemic. “I really need to get back into the weight room.”

Being a student-athlete at the next level isn’t going to be easy, but that’s something Moore expects.

“Pretty nervous,” he admitted of going to Wesleyan. “I don’t know if I’m ready for it, but I’m going to try as hard as I can. I got to do a lot of prep before I even get there.

“Obviously, I think the schooling aspect will be one of the hardest parts just trying to keep up with college work and full-time playing basketball.”

Prior to the pandemic more than three months ago, the Red Devil said he was lifting and playing hoops on the regular.

“Then corona hit and kind of put all of my plans in the dirt,” he added while noting “I don’t think I’ll know until I get to experience the speed and how fast the college level is to know where I’ll fit.”

While blocking shots is something Moore loves to do, he said what he’ll miss most about his days at Calhoun County was the time with his teammates, not only playing, but before the games in the locker room or while eating afterward.

From a Red Devil to a Bobcat, only time will tell what Moore can do at the next level.

He’s just glad for the opportunity.

“I was really surprised that anyone even replied to coach Davis,” he added. “Hearing from coach Patella and how willing he was to talk to me and get me set up to go there, I was ecstatic.”