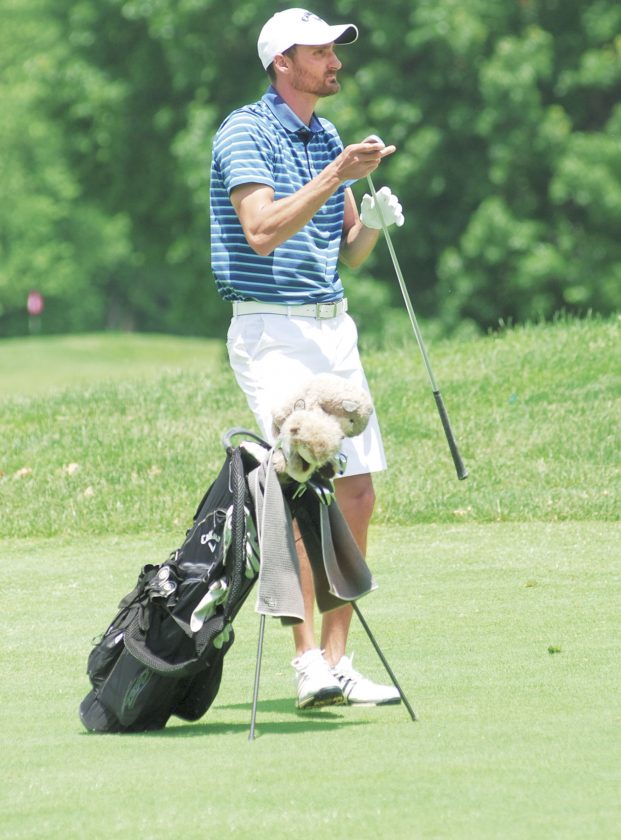 File Photo West Virginia Open player Kenny Hess scopes out his next move during a tournament. Hess is among several local golfers hoping to take the W.Va. Open title away from David Bradshaw over the next three days.

PARKERSBURG — A plethora of area golfers will be out to dethrone defending champ David Bradshaw when the 87th West Virginia Open gets underway this morning at the Resort at Glade Springs.

A year ago, Bradshaw rolled to his crown after firing three rounds in the red at Parkersburg Country Club en route to posting a 17-under par score to win going away by eight strokes.

“The game feels good,” admitted Moore, who by finishing in the top 40 last year was exempt. “Definitely excited to compete and am looking forward to the week. I’ve got my best pal Clayton on the bag this week which should keep things fun out there.”

“I’ve played (the) Cobb (course) a crap ton,” expressed a confident Easthom. “I’m pretty familiar with the golf course. In all honesty, I tell everybody this, I think Cobb is the most fair golf course in West Virginia.

Easthom, who has been working with Greenhills Country Club’s Warren Root on his game, is anxious to get going.

“I like courses like that. It helps separate the pack early,” Easthom added while noting he’s been trying to dial-in his driver. “Me and Warren have been working really hard.

“The golf game is in place. I’m really excited. He and I agreed I need to go down there and compete this year and go down and play well. Just super excited to get down there and play.”

However, golfers like pro Ben Palmer and Isaac Prine had to qualify their way into the field.

Prine, a former Parkersburg Big Red who competes at Marshall University, punched his ticket last Wednesday at Greenhills Country Club after coming up a stroke short of the top 40 last summer. Following a double bogey on the par-5, 15th, Prine birdied out to shoot an even par 70 and secure one of the five spots.

On Sunday, June 14 at an Open qualifier at Riverside Golf Course, a trio of locals earned their way in.

Palmer, a former triple-A medalist for Parkersburg South who helped the Patriots win back-to-back state crowns, fired a 3-under 67 to finish first. Former Ritchie County Rebel and Fairmont State golfer Ben Knight had six birdies and finished with a 1-under 69 to take runner-up honors. Wood County’s Mike Koreski also qualified by shooting a 74 to tie for 12th.

“I’ve been grinding,” admitted Hess, who will be joined by Easthom and Winston Canada in his group. “I went down to Florida this winter and played in two events. I played well in both of them.

“One was on PGA National Championship Course where the Honda Classic is held. I played good golf. It’s a golf course where you can’t miss. You either hit it where you are supposed to or you are in trouble.”

Hess, who has been working with Michael Robinson of Full Process Golf in West Palm Beach, said he’s played more than five dozen competitive rounds on Cobb and likely more than 100 overall.

“I know the course well. We’ll see how the conditions are and how it’s running,” Hess added. “I spend six or seven months in West Palm and work full-time at PGA National. That’s where my coach is at. Winston and I actually played about a month and a half ago.

“He came up to play at the Parkersburg Country Club. A lot of things are better than they were last year (with his game), but they haven’t been put in the fire yet. I feel the consistency is going to be better. I’m excited to see what the game looks like.”

Championship at the Resort at Glade Springs