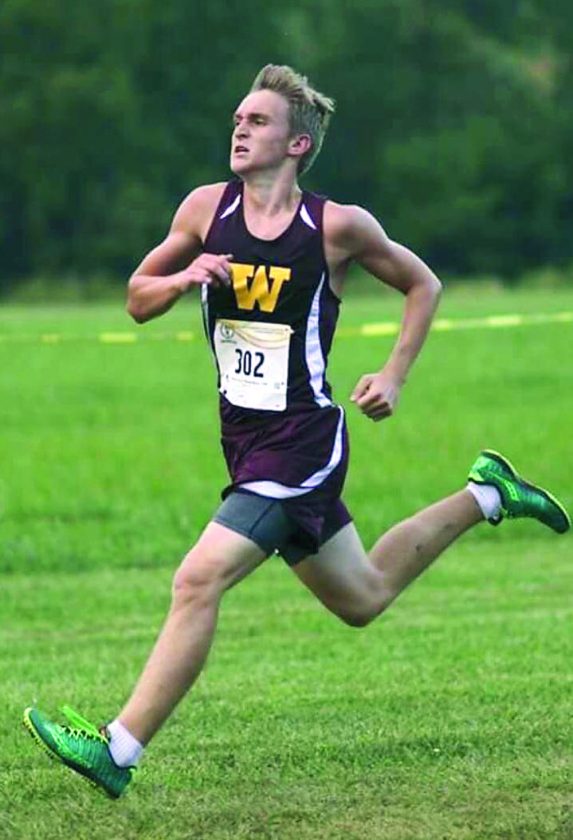 Photo Provided Williamstown’s Dawson Reynolds competes in a high school cross country meet in the fall. Reynolds also was a state champion in track and field.

As a junior for Williamstown, Reynolds was the third leg on the Yellowjackets’ 4×400 relay team which qualified for state.

With Ritchie County and Magnolia also in the mix, the race was expected to be competitive. When the baton got to Reynolds, the adrenaline was flowing.

“Once I got the baton, I was shaking and ready,” said Reynolds, who watched teammates Mikey Bell and Colin Hunkele put the ‘Jackets out in front early. “We were already in the lead and I knew I had to keep that. When I handed it off, we were still in the lead. It was all up to Kole Sutton.”

Sutton did his part and crossed the finish line first, securing a state championship for the Williamstown quartet. Reynolds described the feeling of winning a state title.

“It was beyond anything,” he said. “It blew all of our minds. None of us knew it was our last race. We walked off that football field as champions. I couldn’t ask for anything better than that.”

The next fall, Reynolds competed for the Williamstown cross country team for the fourth straight year, but by the time track season rolled around, so did the coronavirus.

Due to the COVID-19 pandemic, the 2020 spring sports season was canceled, effectively ending the high school careers of senior athletes all around the country, including Reynolds.

“It was just devastating,” Reynolds said. “I got to run cross country my senior year and I’m grateful for that, but track was always my favorite sport. It’s upsetting, but I’ll get through it.”

Reynolds had aspirations of repeating as a state champion in the 4×400, and possibly winning an individual state title in the 400 open.

“It was looking pretty good. We only lost one senior (Bell) and had three back and freshman join the 4×2 (Malachi Stewart),” Reynolds explained. “We were training the whole winter at Mountain River. I ran there with a bunch of friends and did sprint training.”

Once the track season was shut down, Reynolds decided to continue running in his free time.

“Really I just keep busy by going and running by myself and stuff,” he said. “I don’t want to get out of shape. I want to feel healthy. I ran with one of my friends, Sam (Thompson), for awhile.”

Reynolds, who carried a 4.14 high school grade-point average and was a member of the National Honor Society, Student Council and Spanish Club, plans to attend Marshall University and major in health science. The Thundering Herd don’t have a men’s track team, meaning Reynolds won’t be continuing his running career at the collegiate level.

“I thought about maybe running at a smaller school, but I wanted to go to Marshall,” he said. “I’ve been a Marshall fan since forever. My mom went to Marshall. It’s how I was raised.”

Reynolds feels well prepared to handle the workload of a college student. Balancing sports and schoolwork in high school helped get him ready for what was ahead.

“I had a few college classes this year,” he said. “I always had those late nights where you’ve got to work on an essay or something and have a meet the next morning. I had to balance it out, make time to do schoolwork and still practice. Sometimes I’d wake up early just to work on schoolwork, because I always knew i had running afterwards. Both were important to me.”

Reynolds has an open mind about what he wants to do professionally, but he knows it’ll be “something in the medical field,” he said.

This weekend was supposed to be the 2020 West Virginia state track meet, and Reynolds planned to be there in four events. He had hopes of recreating the feeling of winning a state championship.

“It’s one of the best experiences of my life,” he said. “I’ve never felt that much of an adrenaline rush. I’m glad I got to do it with people I call my best friends.”

Reynolds cherished the opportunity to compete for head coach Jill Bryant, with whom he shared a close relationship.

“She always pushes us to do our best,” he said. “She’s there for everyone on the team. She knows we want to win and that’s what we’re there for. We’re not there to mess around. She’s really had a big impact on me and my friends.”

Reynolds is the son of Eric and Heather Reynolds. He has one sister, Brookelyn.