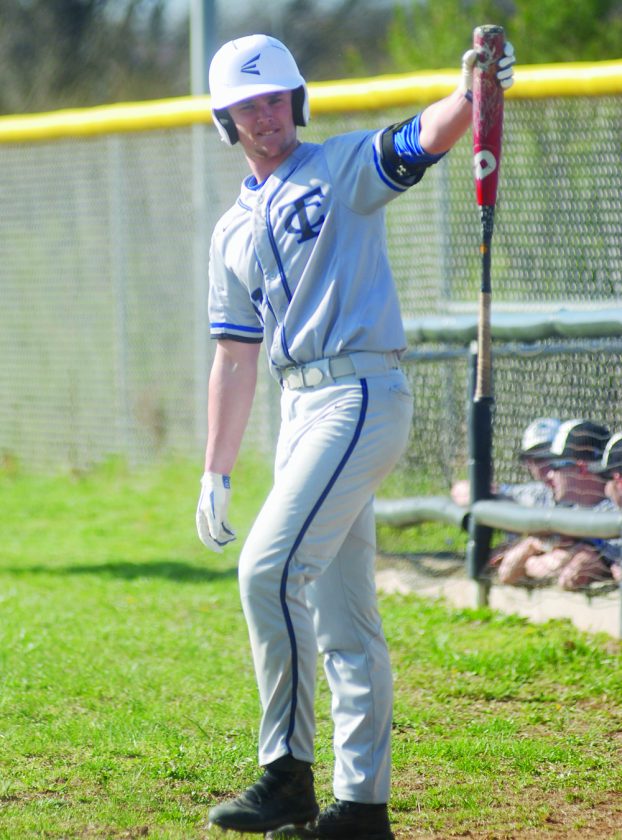 Photo by Jay W. Bennett Tyler Consolidated's Gage Huffman, pictured here last spring at Marshall Field in a game against Parkersburg Catholic, was planning on having an all-state caliber 2020 campaign for the Silver Knights.

After playing football, basketball and baseball for the Silver Knights, Huffman admitted he’s been laser focused since the shutdown started.

“I’m still working. There’s no off days,” he said. “I’m just still trying to keep in shape and keep my arm loose. You never know. Just trying to keep myself in shape really and just working out and everything. We got our diplomas and did everything we would’ve done.

“We had it on video and went into our auditorium. We were only allowed six people at once and had to keep our distance and everything. Some of the staff set up pictures. Considering all the circumstances, it was a lot better than I thought it would’ve been. It was definitely something to remember.”

A three-year letterman on the gridiron, Huffman said “some of my best memories come from football. I definitely miss the grind every day and working with some of my best friends.”

Although he considered himself a shooter in basketball, he was the Silver Knights’ point guard. After playing shortstop and center field as a junior, he was looking to patrol the outfield again this spring for head man Robby Jones.

“Center field is really where I thrive,” Huffman said. “My main goal this year was to be a first team all-state center fielder and I was really confident I was going to do that. I’m definitely planning on playing. I’m probably going to play college baseball. That’s my main goal.

“I have three offers as of right now, but I’ve still been talking to a couple of colleges. I’m still undecided where I’m going to go. As of now, I was definitely going to play summer ball and go to some exposure games.”

The pandemic nixed his chance to show his talents at a Perfect Game Showcase he was invited to in North Carolina.

“It’s a pretty big showcase on this side of the United States,” Huffman stated. “I never got the chance to go. I still have a chance of playing summer ball.

“Our summer coach is still trying to talk through about how we could do that. As of now, there is still kind of hope but it would be sometime in mid-June or July.”

Health guidelines have been suggested for sports like baseball.

One of the areas which concerned Huffman was the fact players are expected to put on a mask as soon as they come running off the field and into the dugout.

“They are not thinking about the players,” Huffman stressed. “A hot summer day, that’s the last thing I would want to do. Walk into the dugout and put a mask on. It could be 60 degrees and it’s still hot.

“In regards to baseball, it’s outdoors. I can see them taking away fans. Korean baseball has been on. That’s all you can watch sports-wise. You don’t see them going into the dugout and putting a mask on.”

Even though things this spring have not come close to even going according to plan, Huffman tends to look at the glass as half full rather than half empty.

“From the beginning I knew I wasn’t going to let it destroy me,” said the Silver Knight of the pandemic. “I knew it was time to grind as hard as ever. There’s still hope. I’m fortunate enough to say I could play at the next level. The grind can’t stop.

“There’s no time to stop. God blessed me with the ability to play and I’m going to play to the best of my ability. This quarantine wasn’t going to tear me down. It was going to build me up and gave me a chance to get in touch with myself to see how hard I can work and what I want.”

Huffman said he’s made videos and distributed them to coaches, but he knows not having his senior year on the field is detrimental.

He finished in the top 15% of the TCHS graduating class and also was a member of the National Honor Society.

The Silver Knight also “challenged myself when it came to this year. A lot of people like to take their senior year off. I’ve worked hard for four years and I tried to finish with a bang and worked as hard as I could. I’m fortunate to play at the next level. My other seniors worked hard with me for four years. Seeing them not being able to play definitely hurts.

“I really wanted to get first team all-state. I was really confident this year I was going to get it. I really feel for the underclassmen. That’s another year they can’t accelerate their abilities, especially the freshmen coming up and they don’t get their feet wet. They play summer ball, but it’s a lot different when you step into the high school game. A lot more pressure.”

Fond memories are numerous for Huffman when he thinks about all the practices and games.

While he would rather play center field if given the option in college, he’s up for anything that’s needed.

“I’m the type of guy that will do whatever the coach wants me to do. I’m a grinder,” Huffman said.

“I enjoy every ounce of the game, but if the coach asked me to catch I’d do everything in my power to catch.”

Continued conditioning and finally making his college decision are the only things currently on Huffman’s mind.

“Probably just being able to adjust,” he said of what the most important thing will be once he starts his next step.

“My main goal is to adjust to the game, just excel and go to a college where my academic and athletic ability will excel.”