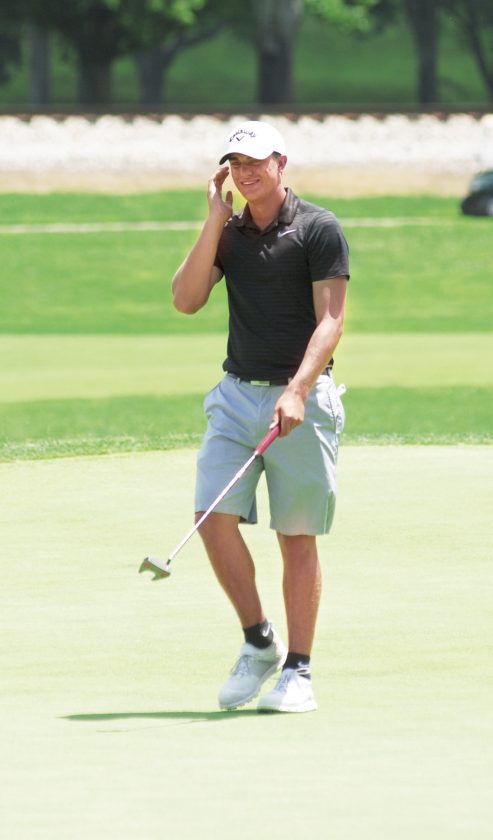 West Liberty University's Alex Easthom, who late last month was named to the PING/NCAA Division II All-Atlantic Region men's golf team for the second straight year, reacts after his putt slides by the hole during the final round of last year's West Virginia Open at Parkersburg Country Club. Photo by Jay W. Bennett

Before midnight on Mother’s Day, the former Ravenswood High School golf standout had to have his last final completed and turned in.

“I was really actually upset about them sending us all home,” Easthom admitted of the COVID-19 pandemic which ended his spring semester of golf before it got started.

“I was pretty close to straight As, maybe a B and then they send us home and a lot of those classes weren’t designed to be online. The teachers and professors did a great job to get everything ready. It was tough. My grades weren’t as high as I was hoping them to be.”

“It was a goal and I did it last year,” said the former Mountain East Conference Freshman of the Year. “I knew it was something I wanted to do again.

“I didn’t think they were going to do the voting for it. Coach (Mike Ricci) calls me and he goes ‘hey, just letting you know they are making all-regional’ and I was like they aren’t even doing that and he’s like they did.”

The pandemic has raised several questions for Easthom and the future of his collegiate golf career.

“The good thing is academically I’m actually going to be a senior next year,” added the 2018 West Virginia Junior Amateur champ. “I can graduate a year early if I pass all my classes.”

Nearing his degree in sports management, Easthom in theory could transfer to do graduate work and continue golfing. He’s also thinking of going after a second degree in agronomy with a future eye on perhaps becoming a golf course superintendent.

“I haven’t really sat down and talked to them about it yet,” Easthom added. “Also depends if I can take my internship this summer or not. If I can’t take my internship it might be tough for me to graduate and transfer over so I might stay at West Liberty and then get my masters.”

Despite all the current restrictions, Easthom said he’s been working out a good bit, but hasn’t been playing as much golf as he’d like.

He also expressed concern about his financial aid package.

“There’s some confusion about scholarships,” he admitted. “Is this going to affect the PROMISE Scholarship?

Instead of focusing on the downside of things, Easthom has tried to remain positive.

“It’s been nice,” he added. “I’ve been able to fish more and stuff like that. Then again, the fun part about a lot of stuff we do for hobbies is doing it with your friends, but you can’t.

“I’ve been spending a lot more time with my younger brother and we made a trip to Summersville, did some trout fishing and played the nine-hole course.”

The way things worked out at WLU weren’t ideal for Easthom, who said he was finally moving all of his belongings from campus back to Jackson County on Tuesday.

One of the toughest parts about losing his spring season was just not having that competition to get the juices flowing.

“I’m a competition junkie,” Easthom quipped. “I’ve always loved competing. I didn’t care what it was, golf, basketball, darts, horseshoes. I love competing. It’s fun and I definitely miss it, you know.

“I’m still not quite good enough to get invited to those big amateur tournaments down south and in Georgia and those invitationals people get invited to. I’m not quite that good yet. I’ll play in the open and the amateur if they are still having them. I might try to qualify for the U.S. AM again.”

As far as his overall game is concerned, Easthom has been honing his skills at Greenhills Country Club.

“We got a new pro up here at Greenhills, Warren Root. We’ve been working a little bit.”