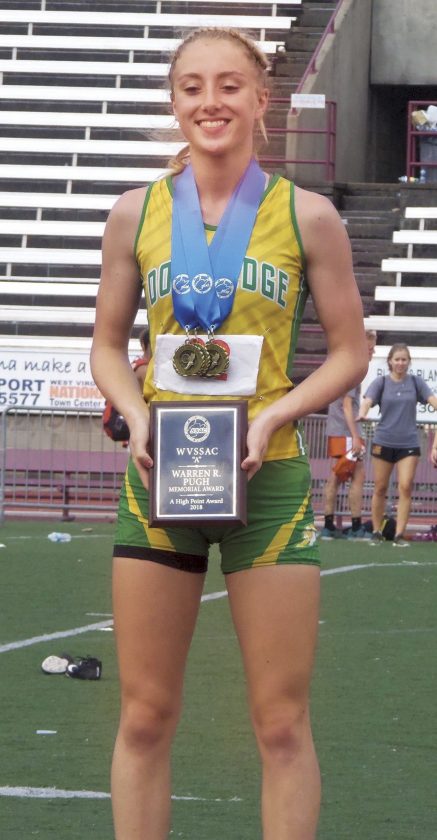 Doddridge County athlete Jonna Ferrell, seen here celebrating her high-point honor after a perfect meet at the 2018 state tournament, will keep running after she signed on the dotted line with Glenville State College. Photo Provided

WEST UNION — Legendary Doddridge County head coach Craig Kellar received several early glimpses at the capabilities and speed of eventual Bulldog Jonna Ferrell before she became a member of the green and gold group responsible for 11 of the high school team’s state championships.

Thanks to the prep coaches judging and supervising the middle school meets, he saw the potential for a standout career from the sprinter years before she advanced to the big stage.

What he witnessed in those opening meets wasn’t just a flash of excitement to be followed by missed chances at the next level.

As Ferrell’s speed joined her at DCHS, the combination set her on track to gain some legendary company.

Ferrell’s sophomore year not only will go down as one of the most dominant seasons in Class A, but it also drew the attention of more than just Kellar and other high school coaches around the Mountain State.

After she set state records in the 200 and 400, unofficially broke the state mark in the 100 and earned four state titles with an impressive finish in the long jump, her name was on the collegiate map early.

“People started inquiring about her and it really got her on the radar,” said Kellar.

Though her follow-up season became defined by injuries, the competitiveness never left her body. Another blazing finish in the 100 officially gave her a final state championship and made it clear she was meant to run at the next level.

Now it became about finding the right school for her family and herself. While she had offers from WVU and Auburn, alongside a desire to play basketball and run track at the next level made keeping her head clear harder, once she really focused, Glenville State became her destination.

“It really was an amazing honor to receive D-I offers because not a lot of kids get those opportunities and I feel very blessed I was able to earn them, but D-II I thought would be a better fit for me,” said Ferrell.

“Coach Nick Spino first contacted me and has been in touch since the beginning and he always had my best interests at heart and I felt like it was a good choice. He sees a lot of potential in me and I have hopes of becoming an all-american while learning from him,” said Ferrell.

“I will be working more on the 200, 400 and my speed and I will be building up my strength because it is not going to be as easy in college.”

“I always thought she could do something in college,” said Kellar. “She has great athletic ability and through her high school years she developed an ability to work on her own. She was training with Guerilla Fitness and Joe Leaman before we got shut down this past spring and her being willing to do something on her own, that is the key because they work you hard and she is used to being worked hard.

“She’s just good to be around and fun and likes to compete and just likes to get going at a meet. You always knew you were going to come up with some points in the four events she participated in and that it going to be hard to replace.”