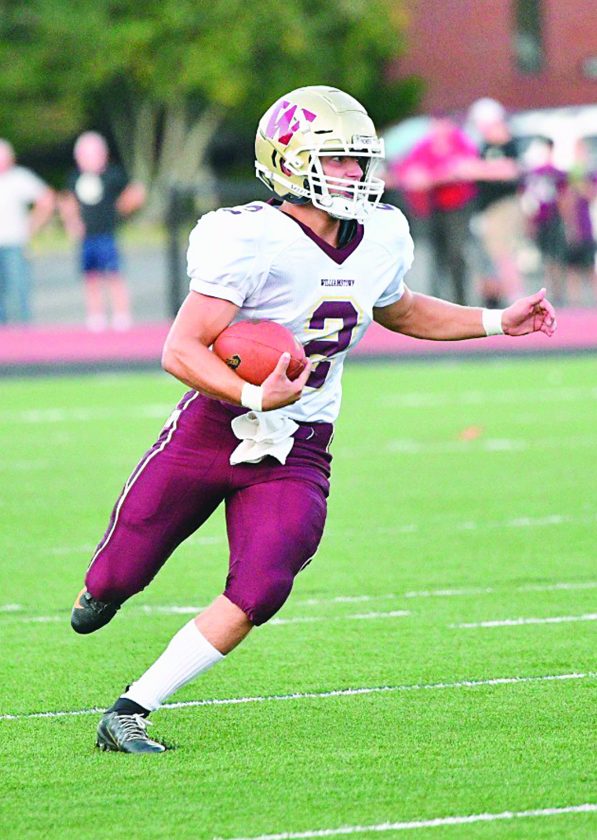 PARKERSBURG — Roane County’s Paul Burdette was as anxious as anyone for the 27th annual Battle Against Cystic Fibrosis All-Star Football Classic.

After all, the Raider head coach led the Mountain State squad to a 24-7 victory back in 2016, which marked the last triumph for the Mountaineers against Ohio.

“I thought we had a pretty good roster going. We were really excited about it,” admitted Burdette, who was going to be helped by assistants Jason Hickman, Matt Peery, John Pena, Cody May and Eddie Williams.

“We just had finalized everything and got the guys intact and committed and then all this stuff started. As the commitments started rolling in we were like man we got some weapons here and we got some size then all this started and it all kind of went downhill from there.”

Burdette said he was asked back in January by St. Marys gridiron boss and BACF game director Jodi Mote if he would like to coach again.

“It was a no-brainer,” Burdette said. “I think it’s a great thing to be able to go out and spend time with different guys and be able to coach those fellows, just be able to coach talent around the area. I think we had a great time at the last one. We were excited about doing it and it was going to be good for us.

“We do have two new staff members and it was going to be able to give us a chance to get like a practice run for what our season was going to be like with new guys in place and a game situation. There was a lot of positives that was going to come out of it for us. We were really looking forward to this.”

The Raiders had a quartet of players who were set to compete in Danny Bush (RB/LB), Cameron Bennett (WR/DB), Isaac Ryan (RB/LB) and lineman Kenny Kelly.

“When I talked to the kids, you know, it was an instant yes from all four of those guys,” Burdette added. “They were excited to be able to play another game and be with us. It was hard for me to tell all the guys, but it was especially hard to tell my own guys we weren’t going to be able to do it.”

Aside from helping to raise money for cystic fibrosis, one of the other reasons Burdette enjoyed his first stint coaching in the BACF game was all the different players.

“A lot of these guys we played against,” he said. “If we didn’t play against them we definitely knew who they were and when we had our meeting in January they told us we could reach out around the state. We had some Liberty (Harrison) guys on there and obviously the Fairmont Senior kid (RB/LB Malachi West).

“We were definitely starting to put things in place and scheme around a little bit amongst ourselves what we wanted to do, but it never got taken off full tilt when all this started and I got to see where it was going. I just felt like the chances of it happening were pretty slim and as it continued to go, obviously, that’s the way it happened.”

With a plethora of all-state talent throughout the roster, Burdette and his staff were expecting nothing less than another BACF victory. Ohio, which trails the overall series 15-11, had won the past three contests.

“Several kids on there that we knew just because of what they’d done, obviously (Hunter) America from Doddridge and we were excited about him,” said the coach of the former Curt Warner Award winner. “We were excited about all of them, don’t get me wrong. Bryce Wamsley (OL/DL) from Liberty (Harrison), he messaged me a lot and he was excited to play in this game.

“He really was and the last text we had before we knew that it was going to not happen he wanted to know if I could give him all the numbers with all the guys so they could get on the same page before it got going. I think he was going to be a dandy. Several guys we played against, Ravenswood and Sissonville and the St. Marys kids.”

Burdette also was pumped to see one of his potential signal-caller candidates.

“I heard a lot about the quarterback from Tyler (Consolidated), (Gage) Huffman,” added the coach. “A lot of guys on there we were excited to be able to coach and just be around and have fun with. It’s just sad it’s not going to be able to take place.

“They’ve thrown around a lot of ideas and the last one I heard was to try to bring them out (both 2020 rosters) for next year and honor them at the game. That would be really good for those guys to at least get those honors.”