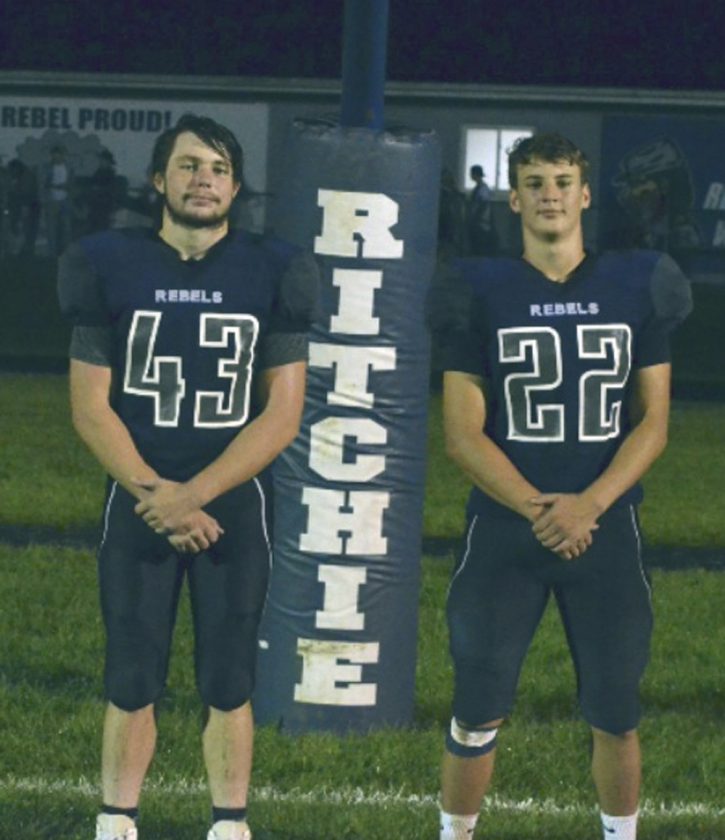 Aside from their love of the gridiron, the Rebels also wrestled. Dingess earned six letters in the two sports and Procacina, who placed fourth in the state at 152 pounds as a senior, had eight.

“I had a couple chances to go wrestle in college,” Procacina said. “That was before the whole AB sprint football situation. I’ve been wrestling since third grade and I started football in middle school.

“Most people would think if I went on to play a collegiate level sport it would be wrestling. Football, to me, it was more like the route I wanted to take over wrestling.”

Dingess plans to major in nursing, get his degree and then work as an emergency room nurse “for a little bit and maybe go back and become a nurse practitioner. We’re heading up to play some sprint football for coach Jett.

“It was kind of unexpected because Kayden and I were thinking we’d go to college to wrestle somewhere if any sport because that’s what we’ve been good at all of our lives. I always wanted to play football in college, but I had kind of written it off because I was undersized. Sprint football works for me since it has a weight limit. It works out real good.”

Even though Dingess’ plan was to head to college and wrestle, he couldn’t pass up the chance to play for the Battlers.

“I had three or four wrestling coaches talking to me at that point wanting me to come up and visit their school,” Dingess added.

“I wanted to see what they could do financially. When sprint football came along I had to take it because I love football.”

Procacina plans to major in natural resource management, but making his college choice was difficult.

“It wasn’t an easy decision,” admitted Procacina, who said he wouldn’t mind being a slot receiver for the Battlers. “Wrestling has been a part of my life since I was little, but I had a lot of support behind me going to AB. A lot of wrestling coaches supported me and they thought it was the right decision for me as well.

“I took a visit and that was the first time I’d ever been there. After the visit, it was like this is a nice campus. This is definitely an option. I met a lot of nice people. I met a lot of the coaches and they seemed like great guys and a good environment. After wrestling season ended I was weighing my options. I just felt like AB was the right place to be.”

Coach Jett, the longtime former head coach at South Harrison, was glad to get the two Rebels on board.

“They come from a great program,” Jett stated. “We played Ritchie a few years when Kenny Wright was there and I first took over. It’s a tradition-rich program. We got the (Gabe) Ray boy there last year and that opened the door I think. He scored the first touchdown in AB history.

“It’s nice to recruit the kids from the small schools. Both of these kids have their heads on and are focused on what they want to do. I take pride in them going to school. When I was at South Harrison every one of my kids graduated from high school. When they come to AB they are going to go to class and graduate. That’s what I look for.”

Dingess said reuniting with Ray definitely will be exciting.

“Actually, him and me and Kayden were all really good friends his senior year and our junior years,” he added. “We stayed in touch when he went to college.

“I talked to Gabe and found out more about the program and what to do and what to expect. He said it’s a big step up even though the guys aren’t as big. They are a lot faster and you’ll be playing really good athletes.”

The past two seasons under RCHS head coach Rick Haught, the Rebels reached the Class A postseason.

Leaving their old stomping grounds isn’t going to be easy for either player.

“For coach Haught to come in and take us all under his wing and really turn the program around, it’s a special feeling,” Procacina said.

“Going from 0-10 to 2-8 and being at the bottom of the scale when it comes to football and then my junior and senior year making our way up to being one of the top teams in the state, it was just a good feeling.”

Following a 40-6 victory versus South Harrison in the opening round of the playoffs to improve to 10-1, the Rebels’ season came to an end following a hard-fought 13-0 home setback at Chuck Schofield Memorial Stadium to eventual three-time defending state champ Wheeling Central.

“Last year we got eliminated in the first round by Mt. View and this year we got beat by Wheeling Central in the second round,” added Dingess, who played linebacker and wing. “It was a big change from what we were used to when coach Haught came in. It was a culture change.

“The first two years we were used to losing and when coach Haught came in we all knew we had a chance. It kind of rejuvenated the team and put life back in us. The team has always been real tight and it’s a brotherhood. I’m going to miss it, but I get to bring some of my brothers with me to AB.”