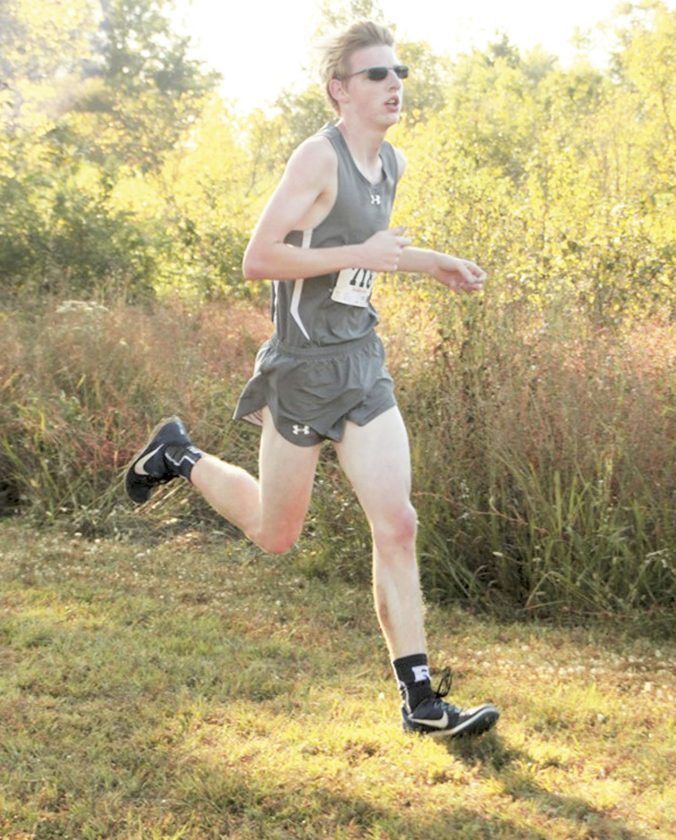 ELLENBORO — This spring hasn’t been one to remember for Ritchie County senior Adam Davis.

One good thing which has taken place was the Rebel deciding to continue his career as a student-athlete at Glenville State College for cross country/track and field head coach Nick Spino.

“I just got it a few days ago. It’s about a 10-page packet, a 13-week schedule of what we have to run and everything,” Davis said of what coach Spino wants him to do this summer before arriving on campus. “The furthest I have to run is a 55 minute run.”

Running and being active is something quite normal for Davis, who as a Rebel competed all four years in wrestling, basketball, cross country and track en route to earning a baker’s dozen athletic letters.

Ritchie County was coming off a repeat Class A state cross country title in the fall and Davis was hoping to shine this spring at the state meet in Charleston. He qualified for the final weekend of the track season as a junior in the 1600 and 3200.

“I’m going to be running cross country and the indoor and outdoor track,” said the expected secondary education math major.

“I’ll be running all year. Right now I’m in the mid-distance group.

“I want to be a teacher and they have one of the best programs in the state for teaching and that was a big part of it. I like their facility with the Waco Center and the athletic training.”

Originally looking at attending West Virginia Wesleyan, Davis said he had made an official visit to the Bobcats before fate led him toward the Pioneers.

“One of my friends who runs at Glenville, Clayton Bee, said are you going to choose Wesleyan,” Davis recalled after his visit to Buckhannon toward the end of cross country season. “I was like I haven’t had anyone else contact me and he texted the coach.”

Despite not getting to compete this spring due to the COVID-19 pandemic, the Rebel admitted “I feel like I’m ready (for college). We’re just small schools, but we have a lot of talent at the school, especially in the LKC area.

“I mean it’s pretty upsetting. I’ve been training for so long now to try to do really good in my last season. I’ve been on the outskirts of placing at the state meet and I wanted to get one of those state medals. It would’ve been cool and fun getting on the podium.”

Davis said he had a pretty solid overall financial aid package, which was boosted thanks to earning the PROMISE Scholarship.

“I do want to just be that top seven on the team for cross country so I can be running at the conference and the regional meets with them,” he added. “I think that would be pretty cool to do.”

An aspect of the pandemic Davis didn’t like was what happened with graduation.

“At first they said they were going to do a drive-thru one and most of the county didn’t like that idea so they went with the second choice, which is what everybody wanted, in person in August,” Davis said. “If it doesn’t work in August then we’ll do a drive-thru one then.”

The thinclad didn’t compete in track until he reached high school.

He recalled his older brother Andrew joining the cross country team and that’s when he got the running bug.

“He was in sixth grade and I always liked going to his meets,” added the Rebel. “When I was in third grade I went to their practices and ran with them kind of and coach Holli (Vaughan) wouldn’t let me run more than a mile.

“It was fourth or fifth grade and they talked me into going over the mile one time and she got mad at me for that. My body is pretty good. I’ve never really got injured from running. I got injured for basketball and it wasn’t a bad injury.”

The future Pioneer said one of the reasons he enjoys running is because he can converse with his friends while doing it.

“Running by myself gets pretty boring, especially going long distances,” Davis stated. “I like to have someone running with me so I can talk while running. That’s one of the main reasons I like the sport.”

Competing in a plethora of sports at Ritchie County was something Davis cherished most of the time.

His father Alan, the RCHS mat coach, told his son they needed bodies going into his freshman year. He told his dad he’d do it, but basketball was coming first.

“Really tiring,” Davis said of the double duty during the winter, but noted “when I finally get to track season it’s kind of a relief, I guess. Wrestling really gets me more in shape. It’s a whole different in shape you can get.”

Playing board games like Monopoly with his family has helped “to get that stress away.”

Thinking back on his time as a Rebel, Davis said “it was really fun having my dad as a coach and his assistant coach (Lester Hughart) was really awesome.

“I have a lot of close friends on the wrestling team, too. I definitely preferred cross country over it all. I didn’t run track until high school because I didn’t like the idea of running circles.”