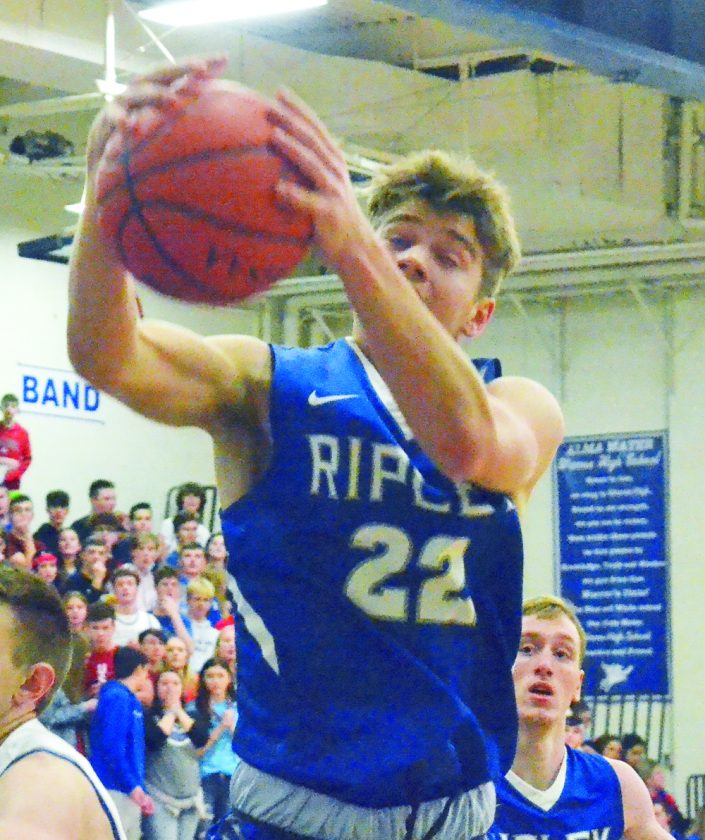 RIPLEY — Carter Casto worked tirelessly to get where he is now.

The Ripley basketball standout “was pretty bad at basketball coming in to high school,” he said. “I just spent a lot of time in the gym every year and got better.”

That’s the kind of player Midway University men’s basketball coach Joe Krupinski is bringing to his program. Casto signed a letter of intent to play at Midway and received a partial basketball scholarship. He plans to major in business.

Midway, located in Kentucky, is a member of the National Association of Intercollegiate Athletics (NAIA) and competes in the River States Conference. The Eagles went 15-15 last season.

“My sister (Clea) is a year older than me and she was looking for colleges in that area last year,” Casto said. “I went on a visit with her. The campus is beautiful.”

The men’s basketball program at Midway is only four years old and has improved every year since its debut under Krupinski’s guidance.

“I really like the coach,” Casto said. “I’ve talked to him a lot. He seems free-flowing. He tailors his offense to what kind of players he has.”

Casto also pointed to the school’s new facilities as a reason he’s attending.

“They’re finishing up the gym right now, and they have a new weight room,” he said. “That’s a big plus.”

Casto looked at several schools and considered walking on at a couple places, but said it was pretty clear Midway was the best choice.

“Midway was the only school that gave me a scholarship offer,” he said.

“I liked a lot of other schools, but this was my best bet for actually getting to play basketball. And it’s a pretty good school, too.”

Casto averaged 8.4 points and 2.2 assists per game as a senior for the Vikings and head coach Luke Parsons. He was a 71% shooter at the free-throw line.

At 6-feet tall, Casto played a lot at the 3 and 4 positions as Ripley ran a smaller lineup, though he feels he’ll be a better fit at the 1 or the 2 in college. That versatility could be very valuable for the Eagles as he’s capable of guarding bigger guys.

Casto had an exciting senior year overall. He joined the soccer team and started at goalie, and then made some memories on the basketball court. He pointed out wins over Warren and Parkersburg as two of his favorites.

“I think my whole senior year was pretty great,” Casto said. “Us five starters had played together since kindergarten and had really good chemistry.”

Casto’s goal going into college is to “have a better college career than I did in high school,” he said. “I want to get minutes as fast as I can. I hope someday to be the guy for that school.”

His work ethic certainly will give him a chance to accomplish all his goals.

“Anyone who knows me knows I have a pretty long offseason every year,” Casto said.

“Over four years of college, I can get a lot better. My potential is higher than it ever was in high school. I bring a good work ethic.”

Casto acknowledged that he wouldn’t have been able to put in so much work without some help.

“I’d really like to thank my high school coaches for letting me in the gym all the time,” he said. “That was a lot. They always gave me the key when I needed it. Coach (Eddie) Smolder really helped me in the weight room. I put on a lot of weight my junior year.”