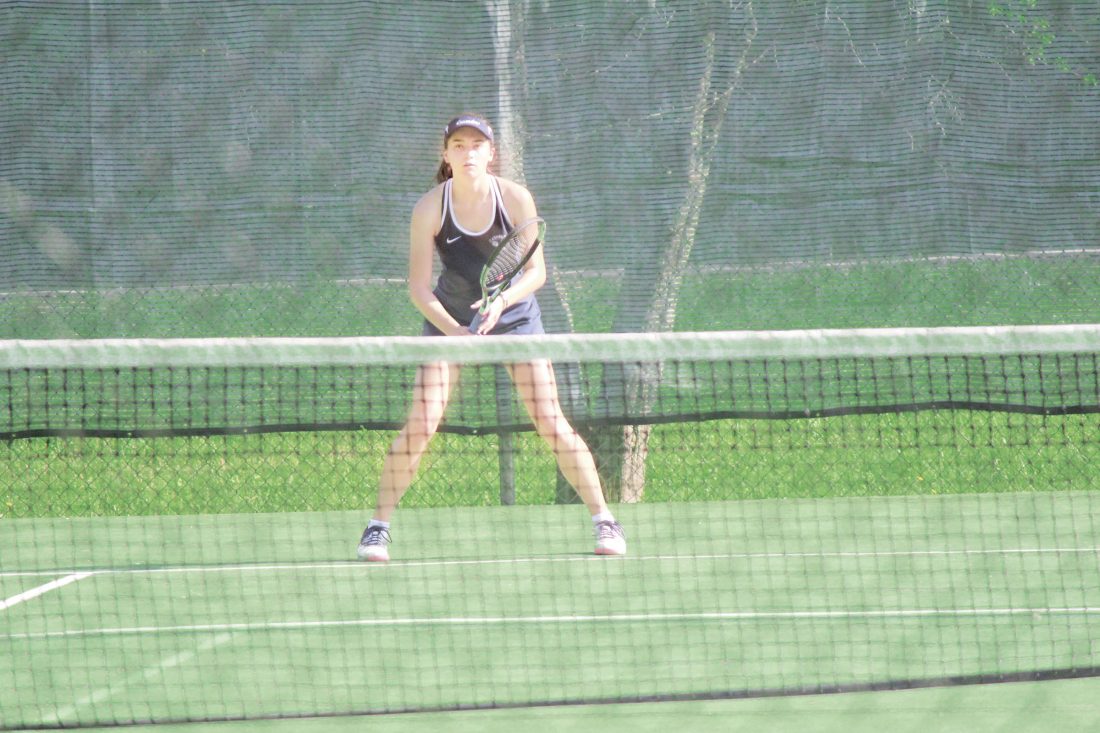 Parkersburg Catholic’s Hannah Sprout readies herself for a point during a Class AA/A state tournament match at Charleston’s Coonskin Park. There will be plenty more tennis matches in her future, despite a lost senior season as a Crusader, after she signed with Fairmont State on Saturday. AP Photo

PARKERSBURG — To play or not to play?

This was the question facing Parkersburg Catholic tennis player Hannah Sprout as she moved on from her time with the Crusaders.

Akron and Fairmont State were ready to help her put her prep playing days behind her with college classrooms and demanding curriculum’s — something she said she easily could have done even though there was a third consecutive singles state championship up for her grabs this season. “I was proud of myself for winning one and would have liked to win three but it wasn’t in the cards,” she said.

But, a cog was thrown into those works just a few months ago.

Unlike many high school seniors who won’t get a final year on the court, fortune gifted Sprout a chance to extend her academic playing career.

FSU’s Kayla Kurczak reaching out through a recruiting website and extending the opportunity just a few months ago got the wheels turning in her prospect’s head. However, Sprout’s decision remained more than about tennis. Studying abroad and participating in an honors program appeared on her wish list for her new home for the next four seasons.

So the Falcons needed to measure up on the academic end as well.

And when push came to shove, Fairmont offered the best package to its prospective recruit.

While Kurczak hasn’t yet seen her in person, Sprout’s not taking anytime off when it comes to preparing to impress her coach upon their eventual meeting.

“I am still going out and hitting every day and am running and working out as much as I can,” she said. “I plan to climb as high as I can wherever coach thinks I should play. I know it is going to be different.”

Though there wasn’t a senior season for her to show off an already improved game this year, there is a lot to like as she transitions to the college level. Her forehand improved, she’s added different serves to her arsenal, she is still working on her backhand, but more importantly her bread and butter remains her best weapon.

This ability to run the court and get to balls she shouldn’t is something Catholic head coach Jason Discini thinks will help her at the next level.

And he, like his player, stressed the need for the continued improvement of her back hand. “College players will pick up on any weakness right away and expose it,” said Discini.

As the length of games builds and the intensity becomes higher with each match, the ability to adapt and not get flustered also remains critical. But, Sprout has the answer to that in her play with the Crusaders.

An impressive mental toughness allowing her to internalize everything and not show an outward emotion on the court leaves her opponents little in the way of what is going through her mind during a match.

With her signing, Sprout becomes the second Parkersburg Catholic female athlete to join a Falcons program over the past few months. Basketball standout Madeline Huffman committed to Stephanie Anderson’s program.

The plan is to double major in Art and Psychology while handling the practice and travel coming with being a part of a college program.

“I already have a lot on my plate so I am kind of used to it,” said Sprout, who won a pair of Class AA/A singles state championships and three all-state honors during her time as a Crusader.