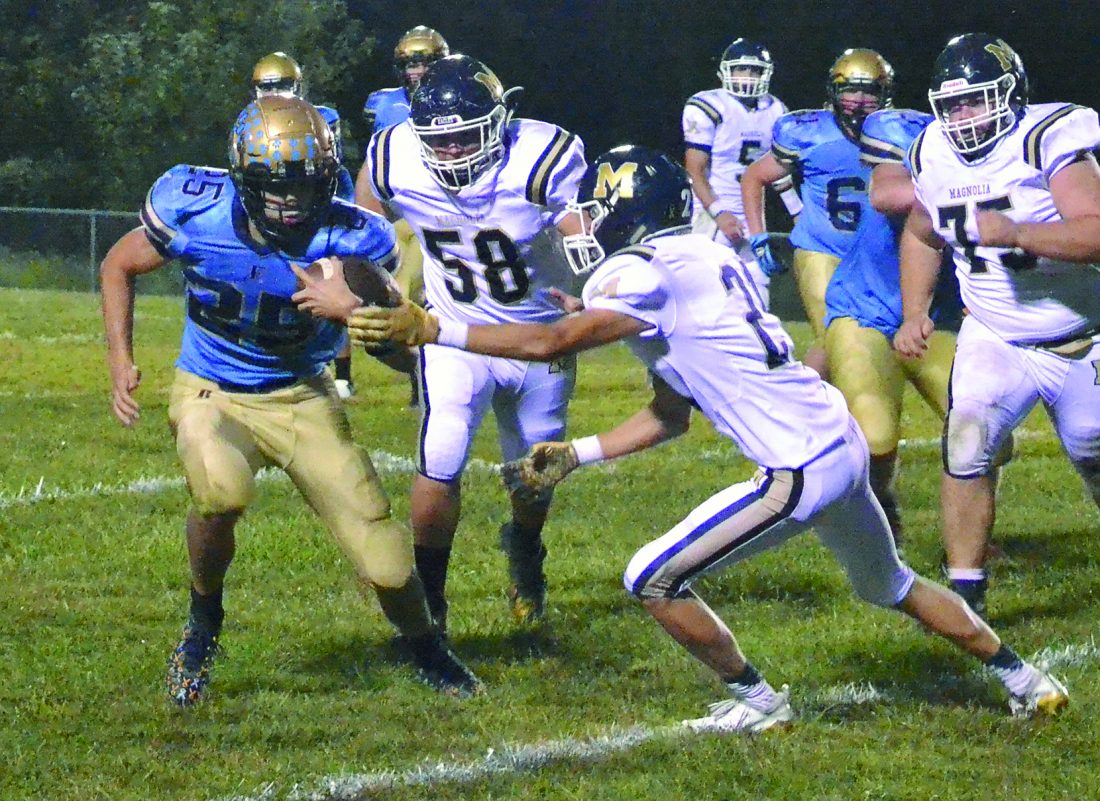 Photo by Ron Johnston Frontier’s Logan Brookover (25) runs with the ball during a high school football game this fall.

NEW MATAMORAS, Ohio — Russ Morris was all set to coach in the Battle Against Cystic Fibrosis All-Star Football Classic for the second time before the COVID-19 pandemic forced the game’s cancellation.

“It’s a great honor,” he said. “It is for a great cause. Anytime you get to coach an all-star game, it’s very humbling. I get to coach some of my kids or kids from other teams you’ve heard of or read about in the newspaper. For a lot of kids, it’s one more chance to play football. Things just didn’t work out. It’s crazy times in our country and in the world. It’s still an honor for those kids to get picked to play in it. It’s a big deal.”

The BACF game, which raises money in an effort to help find a cure for cystic fibrosis, hits close to home for Morris.

“Travis Flores is a student at Frontier and he’s battled cystic fibrosis his whole life,” Morris said. “I think he just had his third lung transplant. So that is one of ours that’s battled this disease. My kids that were going to play know him and I had him as a student, so it really does hit home for us.”

Logan Brookover, Joel Lewis and Kalyb McQueary were seniors for the Cougars this fall. They helped Frontier win seven games and an Ohio Valley Athletic Conference 1A championship.

“They’re great kids,” Morris said. “Anytime you get to coach your kids again one last time, it’s a great thing.”

Morris and his staff were planning on opening things up and making the game enjoyable for everyone.

“We were going to spread it out (offensively) with our guys,” he said. “I know we had some athletes. We were going to have some fun with it and make it fun for the fans to watch.”

Morris is disappointed that the game couldn’t take place but understands it’s a unique, unfortunate situation.

“The coronavirus has taken lives, and that’s most important,” Morris said. “Hopefully it’s taught all of us not to take things for granted. We didn’t anticipate this, having sports taken away because of a virus. Hopefully it makes us all appreciate what we’re able to to do and appreciate each other more. We’ll get through this, but hopefully it teaches us not to take things for granted.

“Hopefully the world gets back to normal and they can play this game next year.”