From Rebel to Pioneer: Ritchie’s Brandon Bowie to throw at GSC 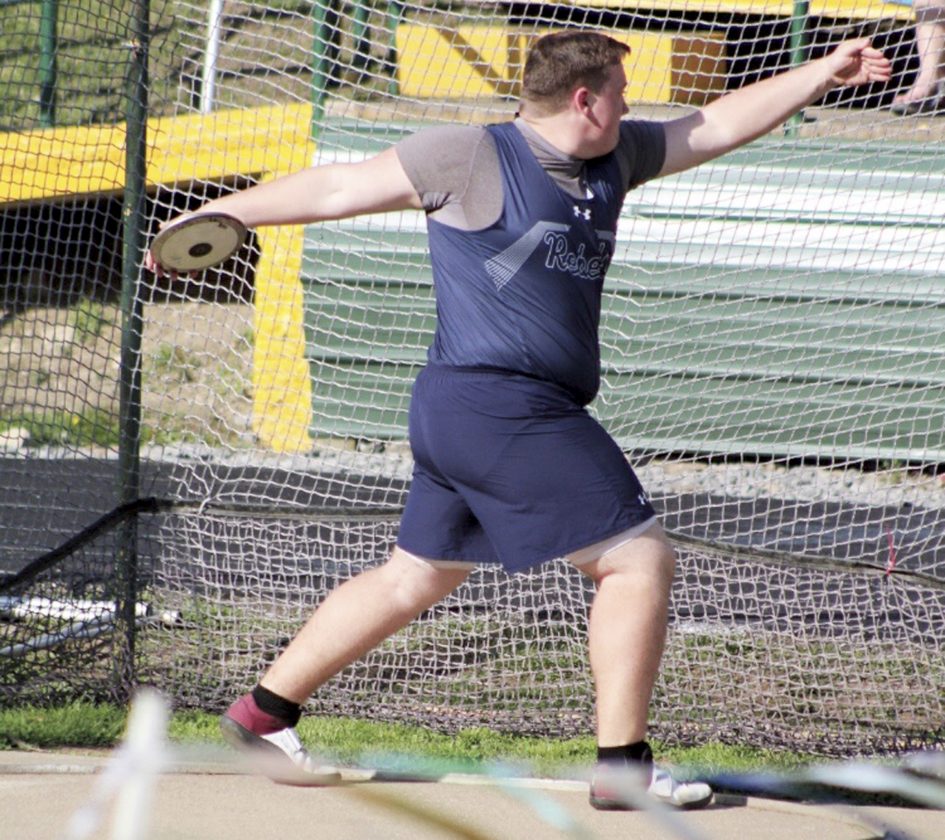 Ritchie County’s Brandon Bowie winds up for an attempt at the discus during a track and field competition. Though Bowie didn’t get his senior season, the Rebel won’t call it quits for his academic sports career. Next season he will be throwing at Glenville State College. Photo provided

ELLENBORO — Ritchie County thrower Brandon Bowie might’ve missed out on his senior season and another shot at state, but the Rebel is looking toward brighter days ahead at Glenville State College.

Rebel boys track and field head man Rick Haught was looking forward to what Bowie might be able to accomplish this spring. A two-time Class A state qualifier in both the shot put and discus, Bowie was looking for a third straight podium finish in Charleston for discus.

Although he visited both West Virginia Wesleyan and Shenandoah University, the straight-A student admitted “I felt like Glenville was the better choice for me, closer to home.”

Now, Bowie is off to throw whatever he can for GSC head coach Nick Spino in the Mountain East Conference and will room with former Rebel teammate Adam Davis.

Bowie said he’s taken a couple of online college classes the last couple of semesters at school and will head to Glenville State with credits.

“I’m going to do five through adult math education,” Bowie said of his likely major. “I’m looking to be a teacher and coach track or football.”

“I really like track,” admitted Bowie, who was a two-way lineman on the gridiron. “I think what helped me is I didn’t start doing it until my eighth-grade year. It’s a fresh thing for me.

“I haven’t reached my peak and I can keep going. I decided last year after this year I was done with football. I didn’t want to try and do it at college. I’ve been playing it a long time. I’m kind of done with it.”

Following a fourth in discus at state as a sophomore, Bowie was fifth in 2019 and just missed placing in the shot where he took seventh.

Now, he’ll get to experience some different events like the javelin and the hammer throw.

“That’s going to be completely new,” he said. “I haven’t done any of those. I look forward to trying it out.”

One thing which has indeed been trying on Bowie is the ongoing COVID-19 pandemic.

“At first whenever I heard they were shutting down schools I figured there might be a chance we can keep going,” Bowie recalled. “I kept throwing and throwing.

“After they canceled it, I didn’t throw every single day. I look forward and I have four more years at Glenville now. It’s not as bad as if I was never going to do it again.”

The Rebel admitted life at home “hasn’t been too bad. We got a lot of acreage so we can go outside and do some stuff. There before it got warmer out we were getting tired of being inside and were irritated of each other.”

Currently, Bowie is just looking forward to getting back into a throwing program and eventually competing again.

He’s also anxious for graduation, which he said had been moved back to August for Ritchie County.

“Probably just being stuck around your house and not being able to go out and do anything and not getting to see your friends as much as you normally do,” Bowie said of what’s been the roughest part of the pandemic.

Despite everything which didn’t go his way this spring, Bowie is looking forward to his future as a Pioneer.

“I really wanted to go up there because it was close and I really like their equipment,” he said. “They got the nice Waco Center and the weight room. I loved it here at Ritchie County. It was great. We got a big backing from the community.

“The first couple years for football were rough years and coach Haught took over the program and we got all the games broadcast over the radio. It was real good and track has been good. We got great track coaches and our throwing coach Jared Shipe is really good and we got good community backing, too.”