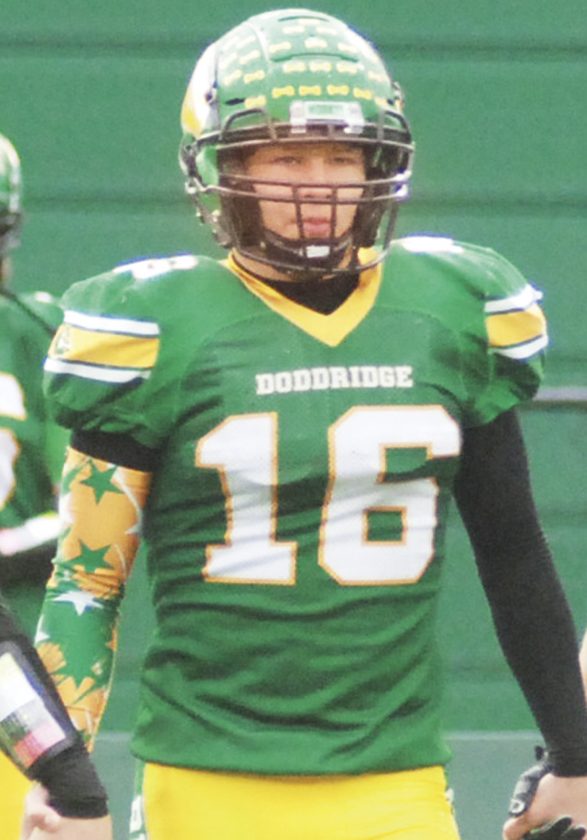 Such might be the case, but suffice it to say Doddridge County student-athlete Austin Kelley never was looking for any time off.

A knee injury at the end of his junior football season cost him the 2019 baseball campaign.

Although he was looking forward to getting back on the diamond this spring, the COVID-19 pandemic squashed any hope of that.

“My plan was to always play college baseball,” admitted Kelley, who is set to compete on the gridiron for Alderson Broaddus sprint football head coach Brad Jett.

“It was in the playoffs,” he said of his junior year. “We were the home team, but our field was too bad and we had to play Cameron at Gilmer. We were the home team and got to pick where we play. I tore my ACL and the inside and outside of my meniscus.

“I went up for a pass. When I came down my foot planted and got stuck in the turf and my whole body twisted around and the bottom half of my knee stayed in one spot and the top half totally rotated and I heard it pop like three times.”

Following an arduous rehab, Kelley was more than ready to go for his senior campaign and what a year it was. The Bulldog linebacker, who helped his team to the state title game, led the squad with 154 total tackles. He also forced six fumbles and recovered five en route to earning Class A first team all-state honors.

“I’ve known his grandma and grandpa for years. I played softball with them,” said the second-year head man Jett. “He’s the one I went after in Doddridge County. He’s going to help. A great young man.

“I don’t know if anybody else was after him or not. He was first after getting (Landon) McFadden from South Harrison. That was my first stop and then Doddridge County was my second stop.”

The injury was something Kelley tried not to think about after it happened in 2018.

“It was nasty,” he added. “I could hear it pop. I thought it was something serious. I tried to talk myself out of it not being serious.

“I played the first quarter of the Wheeling Central game before it gave out of me. That was a semifinal game and I didn’t want to miss that.”

What he knew was most likely the case proved to be true after he received his MRI results and then shortly thereafter went in for surgery.

He was released in time to compete during the three-week summer coaching period and finally got back to doing what he loved.

Now, he’s anxious to get going with the Battlers and sprint football, which has a weight limit.

“I really didn’t know much about it until I got pulled out of class one day and he (Jett) sat me down and talked to me and told me about everything,” Kelley added. “He got me to go on a couple visits and once I got up there I really liked it.

“I didn’t really want to go to college for football. It was always more baseball, but once he talked to me and I walked around seeing how things are up there it’s just like Doddridge County, honestly, and that made me want to go there.”

Kelley said he played at around 170 pounds this past year despite trying to gain weight and be about 180 pounds.

A four-year letterman for football, Kelley finished with just two in baseball.

“It will be a lot faster,” Kelley said of playing sprint football. “It will be a lot more physical for me anyway. I won’t have to worry about having someone like Cole (James, falling on me).”

Even though things during his prep career didn’t go exactly as planned, Kelley cherishes the moments he had as a Bulldog.

“Going to Doddridge was awesome,” Kelley added. “I wouldn’t trade it for any other school. Everyone is more like a family there than anywhere I’ve seen in my life and I’ve talked to kids from different schools and they say they don’t have that there. If you went to the home games this year, there were thousands of people coming out of every nook and cranny cheering us on and there’s not many places you can find that.

“It was so much fun. There wasn’t a bad day of practice. The practices, they sucked but they were fun. They weren’t easy, but it was pretty fun. Everyone was always laughing and having a good time and getting serious when we had to be. I’ve played baseball ever since I was little, ever since you could from T-ball all the way up and playing and looking forward to my junior and senior year and it’s just gone. It is what it is. It definitely sucked.”

Losing out on normal senior activities also has been less than ideal, but Kelley said the plan is for the seniors to graduate in either July or August.

When asked if there was a memory which happened to stand out to him during his time as a Bulldog he was quick to reply.

“There was one,” he said of a contest on what proved to be the last play of that particular game. “Devin Farley, he was our defensive tackle and some kid like kept punching him and Cole and I got mad and we ran up and both clocked him at the same time and we pancaked him and were getting up.

“We were talking to each other and we thought the play was over and the quarterback rolls out and throws the ball down field and we didn’t touch him. We weren’t paying attention. (During film) coach (Bobby) Burnside was dying laughing and said normally I’d been mad, but you could see on film where that kid was just punching Devin. We’ve watched in on film I don’t know how many times.”